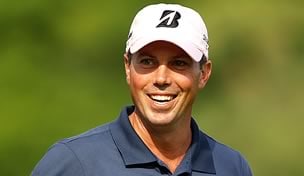 The start of the 2013 golf season is now upon us. Thirty men that hoisted trophies in 2012 will begin the new FedEx Cup season in Kapalua, site of big greens and even bigger fairways. The 7,411-yard Plantation Course is the only par-73 layout that Tour players will see this year, and should allow for low scores despite its length and expansive, undulating targets. With that in mind, here is a look inside the numbers to see which players may contend for the title and help your Golf Channel Fantasy Challenge team in the process:

• Outside of defending champion Steve Stricker, perhaps the best recent record at Kapalua belongs to Matt Kuchar, who has a pair of top-6 finishes here in his last two starts. His steady play was on display in 2010, when he was T-2 in the field in both fairways hit and greens in regulation en route to a third-place finish, which he followed with a T-6 result in 2011. Last year Kuchar finished fifth on Tour in scoring average and seventh in scrambling.

• This week's event will see no shortage of long balls off the tee, both with the length and elevation changes of the Plantation Course and the bombers in the field. Five players in this week's 30-man field averaged over 300 yards per drive on Tour last year, including Scott Stallings, Keegan Bradley, Scott Piercy, Dustin Johnson and Bubba Watson, who led the Tour last season while averaging over 315 yards per drive.

• Of the eight golfers in Group 1, only one player will be making his first career appearance in this event: Jason Dufner. Having won for the first time in his career at last year's Zurich Classic of New Orleans, Dufner may face a learning curve on Kapalua's expansive greens. Brandt Snedeker, Webb Simpson and Keegan Bradley will all be making their second career starts on the Plantation Course this week.

• Two players from Group 3 have previously recorded top-10 finishes in this event: Ian Poulter, who ended up T-6 in his lone prior appearance in Kapalua in 2011, and Johnson Wagner, who has cracked the top 10 in each of two career starts. Wagner finished 10th in 2009 and recorded a T-9 finish here last year, one week before winning at the Sony Open in Hawaii.

• With five par-5 holes on the Plantation Course's par-73 layout, capitalizing on the longest holes each day will be of great importance, as each of the last four winners have played the par-5s in 10-under or better for the week. This bodes well for Keegan Bradley and Zach Johnson, who both finished the year tied for eighth on Tour in par-5 performance in 2012.