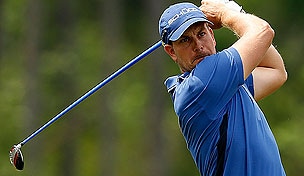 This week an elite field makes that coveted drive down Magnolia Lane, with 93 players set to participate in the 77th edition of the Masters. The nuances of Augusta National Golf Club have long been discussed and analyzed, but the players vying for the season's first major will need to pair accurate tee-to-green play with deft touch around the greens. With that in mind, here is a look inside the numbers to see which players may contend for the title and help your Golf Channel Fantasy Challenge team in the process:

• Among the last players to earn an invite into the event, Henrik Stenson is now one of the more popular 'sleeper' picks in the field. Coming off a runner-up finish at the Shell Houston Open in his last start, the Swede would lead the PGA Tour in both scrambling and greens in regulation percentage had he played enough rounds to qualify, while sitting second in driving accuracy. Last year, Stenson held sole possession of the lead for much of the opening round before a quadruple-bogey 8 on the home hole derailed his round.

• Though he has played sparingly in 2013, Adam Scott returns to Augusta this week with the distinction of being the only player to finish inside the top 10 each of the last two years. The Aussie, who nearly won the British Open last summer, was a runner-up to Charl Schwartzel in 2011 and tied for eighth last year. Overall, Scott has four top-10 finishes in majors since 2011, and was inside the top 15 at each of golf's four biggest events last season.

• For players hoping to don a green jacket at week's end, capitalizing on the four par-5 holes at Augusta National will be of the utmost importance. Since 2006, six of the seven champions have played the par-5s in 8 under or better for the week, with Phil Mickelson playing the holes in 13 under and 12 under for the week en route to titles in 2006 and 2010, respectively. The lone exception during that stretch was Trevor Immelman, who played the longest holes at 3 under for the week amid difficult conditions in 2008 that saw 8 under serve as the winning score overall.

• While the appearance of several past champions will be largely ceremonial in nature, two former Masters winners that could contend deep into the weekend are Fred Couples and Angel Cabrera. Couples, who won here 21 years ago, has finished inside the top 15 each of the last three years, including a sixth-place showing in 2010. Cabrera, who won in 2009, has four other top-10 finishes at Augusta since 2001 and has amassed more than $2.4 million in 13 career Masters starts.

• Though the Masters is often defined by play on and around the greens at Augusta National, recent history places an even greater importance on reaching those treacherous surfaces in regulation. Of the past 13 Masters winners, 10 were ranked T-4 or better for the week in GIR percentage, with nine of those 10 hitting at least 50/72 greens in regulation. That could bode well for a player like Bill Haas, who currently leads the PGA Tour in GIR percentage but has yet to crack the top 25 in three career Masters appearances.