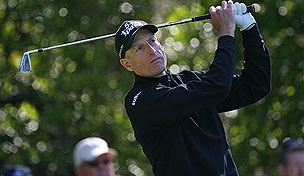 This week the PGA Tour heads north of the border to Ancaster, Ontario for the RBC Canadian Open. Hamilton Golf & Country Club plays host to this event for the first time since 2006, when Jim Furyk emerged victorious. Several players, including Ernie Els, have made the flight from Royal Lytham to Canada to tee it up this week on a course that will demand accuracy from tee to green. With that in mind, here is a look inside the numbers to see which players may contend for the title and help your Golf Channel Fantasy Challenge team in the process:

• In 2006, Jim Furyk led the field in putts per round en route to a one-shot victory. Currently 20th on Tour in total putting, a repeat performance on the greens is certainly possible; his high ranks in many other categories - Furyk is currently fourth on Tour in scrambling, fourth in scoring average and fifth in driving accuracy - make his a name you'd expect to see near the top of the leaderboard on Sunday.

• Sean O'Hair returns to this event with some positive memories - both as defending champion, having won in a playoff last year outside Vancouver, and based on his third-place finish the last time this event was held at Hamilton G&CC in 2006. O'Hair also finished T-7 earlier this month at the Greenbrier Classic on a course that sets up very similarly to the one players will face this week in Ontario.

• Seung-yul Noh is one of the hottest players in the field this week, having posted four top-20 finishes in his last five starts dating back to the FedEx St. Jude Classic. The South Korean has now made 11 consecutive cuts, good for the fourth longest active streak on Tour, and 16 of his last 20 competitive rounds have been in the 60s.

• Josh Teater is a great example of a player who likely needs only a decent showing on the greens in order to contend this week. Teater is among the most consistent on Tour tee-to-green, ranking 15th in ball striking, but struggles from there - 163rd in scrambling, 184th in 3-putt avoidance and 190th in total putting. Last week at the True South Classic, Teater was a respectable 29th in strokes gained putting, and not surprisingly was able to parlay that effort into his first top-10 finish of the season.

• Like Teater, Graham DeLaet also ranks 15th on Tour in ball striking. DeLaet will help lead a contingent of 23 Canadians, including David Hearn, Stephen Ames and Adam Hadwin - who finished T-4 last year - at their national Open. DeLaet led the field in greens in regulation in his last Tour start at the Greenbrier Classic en route to a T-12 finish and will look to become the first Canadian to win this event since 1954.

• Greenbrier Classic champion Ted Potter, Jr. hopes to continue a recent run that has seen him turn around his 2012 season seemingly out of nowhere. After missing five straight cuts prior to his win in West Virginia, Potter has now played the weekend in three consecutive events, including last week's British Open. He currently leads the Tour in GIR percentage from 150-175 yards and is second on Tour in putts from 5-10 feet, two metrics which may be key to success this week in Ontario.

• British Open champion Ernie Els is not the only player heading to Hamilton on the heels of a victory. Scott Stallings earned his second career Tour victory last week at the True South Classic and will tee it up this week as well. Last week Stallings was second in the field in driving distance and third in strokes gained putting; a similar combination in Ancaster may help Stallings, ranked 153rd on Tour in driving accuracy, counter the struggles he is expected to endure finding the fairway off the tee.

Tune in to Golf Channel Thursday-Friday from 3P-6P ET for live coverage of the RBC Canadian Open.