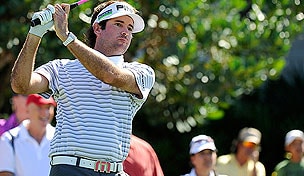 This week many of the best golfers in the world head to Akron, Ohio for the third WGC event of 2012, the Bridgestone Invitational. Those not fortunate enough to make the field in Ohio will take a trip west to Nevada for the Reno-Tahoe Open, employing a modified Stableford scoring system for the first time this year. With only three weeks until the FedEx Cup playoffs, many players in both fields will be jockeying for postseason positioning this week. With that in mind, here is a look inside the numbers to see which players may contend for the title and help your Golf Channel Fantasy Challenge team in the process:

• Over the past few years, finding the greens at Firestone CC in regulation has consistently been a key for success. Since 2007, every eventual WGC-Bridgestone champion has hit at least 50/72 greens in regulation during the event, and each finished T-9 or better for the week in GIR percentage. Thus far in 2012, Bubba Watson leads the Tour in this category, hitting the green in regulation 71.46% of the time.

• Of the 74 career PGA Tour wins for Tiger Woods, 21 of them have come across just three golf courses - Firestone, Bay Hill and Torrey Pines, where Woods has won seven times each. This week he looks to join Sam Snead, who dominated the Greater Greensboro Open during his illustrious career, as the only men to ever win the same Tour event eight times.

• Pat Perez heads to Reno this week hoping to improve on his runner-up finish from a year ago. Before withdrawing from the John Deere, Perez had finished in the top 30 in five of his previous six Tour starts dating back to The Players. He is currently 19th on Tour in birdie average and ninth in par-5 birdies or better, two stats which could lead to success under the modified Stableford scoring system that tends to reward aggressive play.

• Josh Teater officially has some momentum on his side, having carded back-to-back top-10 finishes on Tour for the first time in his career. Teater's 2012 stat line is an impressive one: 12th on Tour in total birdies, 15th in ball-striking and 15th in birdies or better on par-5 holes. He finished T-10 in Reno last year and is positioned well for another high finish this week.

• While making few starts in the U.S., Francesco Molinari has amassed an impressive record in 2012. The Italian recorded back-to-back runner-up finishes in Europe leading up to the British Open and currently ranks second on the Euro Tour in GIR percentage and sixth in driving accuracy. Last year Molinari led the field at Firestone in fairways hit and was T-8 in GIR percentage en route to a T-15 finish.

• Another player in strong form heading into the Reno-Tahoe Open is Billy Horschel. Placing a season-best third two weeks ago in Mississippi, Horschel has now made six consecutive cuts dating back to the FedEx St. Jude Classic. He ranks seventh on Tour in total driving and 10th in ball-striking, both indicators that he should be in position for plenty of birdies this week, and finished T-10 at Montreux a year ago.

• Rickie Fowler, Dustin Johnson and Steve Stricker have all won on Tour in 2012, but all three are looking to move off the Ryder Cup bubble with a good performance this week in Ohio. Fowler, last year's runner-up here, is currently 10th in the standings. Johnson, currently 12th, enters off a T-9 finish at the British Open, while Stricker, currently 15th, will look to build upon two top-10 finishes in his last three trips to Firestone CC.

Tune in to Golf Channel Thursday-Sunday from 6:30P-8:30P ET for coverage of the Reno-Tahoe Open.