With this victory: What Woods' API win means 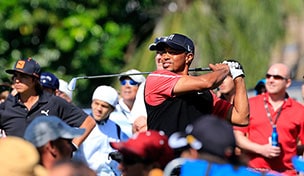 ORLANDO, Fla. – Tiger Woods’ victory at the Arnold Palmer Invitational Monday is the 77th in his PGA Tour career and the eighth in this tournament at Bay Hill. Woods trails Sam Snead by five in career PGA Tour wins; five of Snead's wins came in team competitions. Here are other nuggets regarding Woods’ victory:

• The victory moved Woods back to the No. 1 spot in the Official World Golf Ranking for the first time since Oct. 24, 2010. Rory McIlroy is scheduled to play the Shell Houston Open later this week and could regain the No. 1 position with a strong performance. If not, Woods will be No. 1 entering the Masters.

• The lowest ranking Woods found since he was last No. 1 was 58th.

• This is the eighth time Woods has won this event. He has won three other events on the PGA Tour seven times – WGC-Bridgestone Invitational, Farmers Insurance Open and the WGC-Cadillac Championship.

• The victory is his 15th in the state of Florida. He also has won 14 times in California.