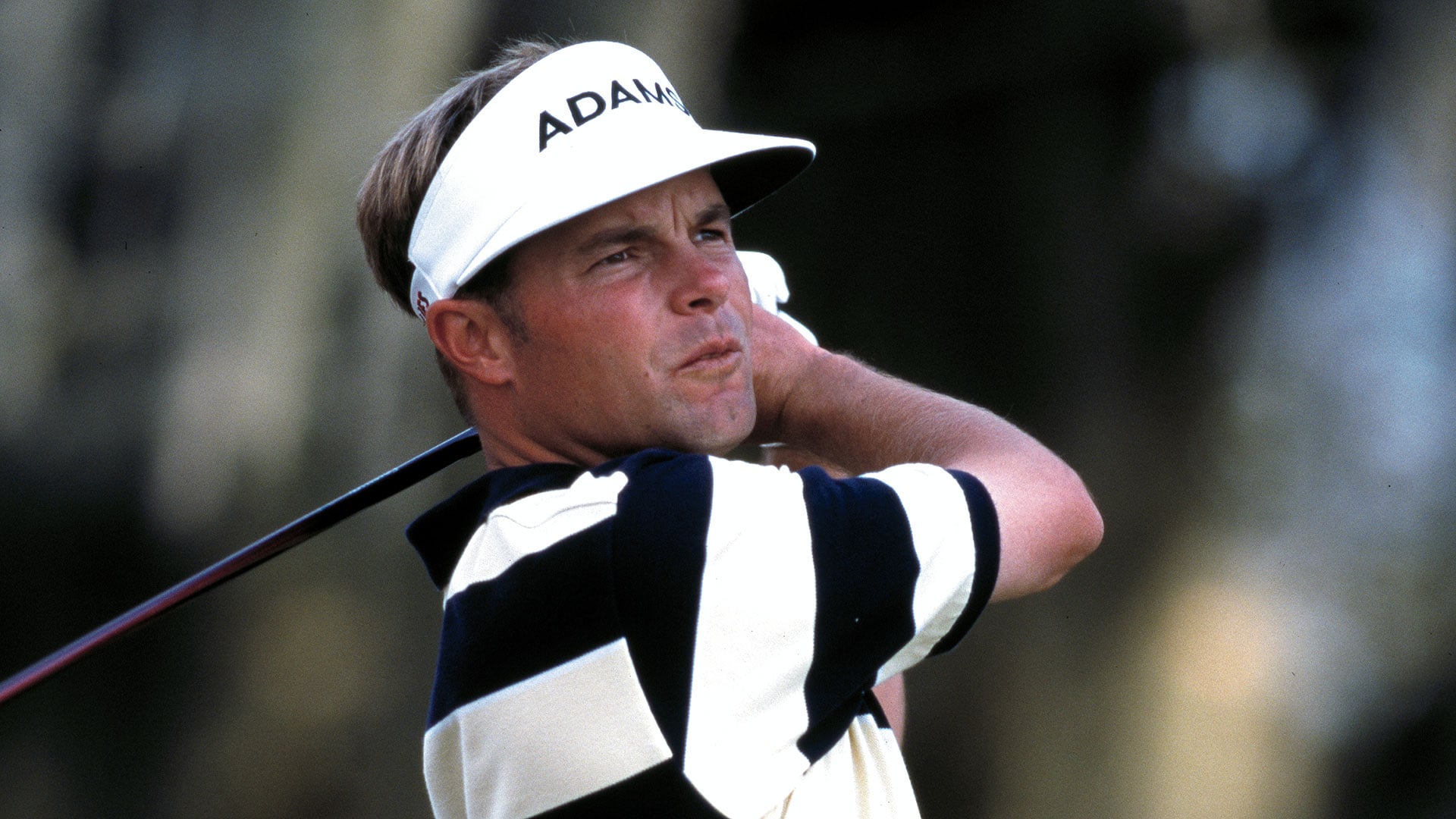 Brigman knows his name is still whispered among players in locker rooms and on practice ranges. He may be the best-known golfer – at least among PGA Tour players – who has never had exempt status on the PGA Tour. There were times, Brigman jokes, that he wondered if his real name wasn’t That Poor Guy.

It happened in 1999 when PGA Tour Q-School finals were held at Doral – not on the famed Blue Course, at the Gold Course next door. Brigman was 28. He had been a good college player at Oklahoma State and had patiently worked on his game, thinking, after five years on what was then the Nike Tour, that he had a realistic chance to make the PGA Tour.

He went into the final day at Doral knowing he had to go low to get inside the qualifying number, but believing he had the ability to pull it off.

“The story of my life in golf has been getting myself to believe in my game,” he said recently, just before heading off to play second stage of this year’s Q-School. “I remember years back I was hitting balls with a buddy of mine and he said to me, ‘Jaxon, you aren’t practicing, you’re searching.’ That was probably pretty accurate.”

Not on that last day at Doral. All day long, Brigman was in the zone where he wanted to be, firing at flags, knowing he needed to make birdies – and making them. By the time he reached the ninth hole – his 18th of the day – he was 7 under par and convinced he was right on the qualifying number.

“I figured I had to make par,” he said. “I had a difficult second shot about 190 to the hole, under pressure and I hit it pretty close. It was one of the few times in my life I was impressed with myself. Then I missed a 6-footer for birdie. I made par and when I got to the scorer’s tent I saw a board on Golf Channel that said 15 under was the number – which was where I was.

“I went into the scoring tent and I was so excited I was actually shaking. I was wound up, nervous even. I was having trouble focusing on my card. Jay Hobby (another Nike Tour player who had kept his card) had circled all my birdies. There were seven – and no bogeys. I counted the circles and signed my card. I’d shot 65.”

There was one problem. Hobby, no doubt nervous himself, had written down a 4 on Brigman’s card on the 13th hole when he had actually made a birdie 3. He had circled the 4 to indicate the birdie but had written down the wrong number. Brigman didn’t catch it. Once he signed the card, his official score became 66.  Tour official Steve Carman, who runs Q-School, had to give him the news while he was celebrating with his family.

“When I saw it I was sick,” Carman said years later. “But there was absolutely nothing I could do.”

The only saving grace – if there was one – for Brigman was that he wasn’t disqualified. Since he had signed for a higher score, he had to accept that as his score.

Brigman went back to second stage a year later and lost in a four-for-three playoff for the final spot. Carman was there that day, too, and watching the players struggle in 35-degree weather and near-darkness during that playoff, decided to change the rules for the first two stages: now, all those who tie for the last spot move to the next stage. It might be called “The Jaxon Brigman Rule.”

Brigman is still playing today, grinding on mini-tours at 41, believing he still has some good golf left in him. Now though, there’s another reason he’s playing: escape.  Last spring, real life intervened in Brigman’s search for a better golf swing in the most tragic way possible.

On the morning of May 16 he was in the shower in a house he had rented in the Dallas suburb of Frisco. He and Ami had separated several months earlier and Brigman had found a place nearby so he could see his daughters – Malyn, who was 5 at the time and Tatum, who was 3 – as often as possible.

Brigman heard the phone ring but didn’t see any need to rush to get it. A few minutes later, the phone rang again. He didn’t recognize the number but he answered it anyway.

It was the police. There had been an accident. Ami had been en route to school with the girls when a car had tried to cut into traffic on heavily traveled Lebanon Road, a four-lane road that many people took in the morning to get to the Dallas-area toll road.

“There was a woman in the median trying to get in to traffic,” Brigman said. “It’s very hard at that hour. She apparently thought Ami was past her but mistimed it. She hit the side of the car and Ami fish-tailed and went into the middle of a tree.

“My first thought was it couldn’t be that serious because you can’t drive much more than 40 on that road in the morning,” Brigman said.

“But when I got close to the accident site I saw a helicopter taking off from an apartment complex across from where the police had told me they had hit the tree. When I got there, Ami was in an ambulance – she’d had the wind knocked out of her when the air bag hit her, but was OK. I asked about the girls and someone said, ‘Your little one (Tatum) is in bad shape.’ They had taken both of them in the helicopter.

“I got in the ambulance with Ami and we took off heading for the Children’s Medical Hospital in downtown. I kept thinking, ‘It can't be that bad, they weren’t going that fast.’ The guy had the siren going to get us there as fast as possible. We had gotten into downtown when all of a sudden he turned the siren off. He didn’t say anything but that’s when I knew.”

At the hospital they were told Malyn was doing well. Tatum had not made it.

“Everyone reacts differently to that kind of tragedy,” Brigman said quietly. “My instinct was to avoid – to run – to not want to talk about it. Even now, when Malyn and I talk about Tatum we do it in the present tense. It’s as if we feel we’re keeping her spirit alive that way.”

Jaxon and Ami are now divorced but have worked closely together to deal with theirs and their daughter’s grief. Jaxon and Malyn have gone to grief counseling together. Through it all, the best therapy has been the game that, prior to May, had caused most of the pain in his life.

“Golf has always been my passion,” he said. “It’s not as if playing and competing gets me completely away from my thoughts but it does provide some escape. When I’m playing, I have to force myself to try to focus on hitting the next shot and that’s a good thing.”

Brigman’s biggest problem as a golfer was always lack of length. When he almost made the Tour in 1999 he was 5-foot-8, 140 pounds. “I always needed a golf course that wasn’t that long and I needed the stars to align to really play well.”

That’s why he decided a few years ago, not long after a fifth-place finish at the Byron Nelson Classic, that he needed to gain strength and length. He has worked with a trainer and his weight is now up to 175 pounds. “I’m longer now than I’ve ever been,” he said. “But the game still baffles me – like everyone else, I guess.”

He cruised through first stage in October and was in contention for two rounds at second stage before a 75-74 left him way outside the number. It was a setback, but not one likely to faze him at this point in his life.

“If I’ve learned anything this year it’s that the golf course is the best place for me to deal with what’s gone on in my life,” he said. “I’m sorry Q-School is going away. To me, it’s the place where you can go to dream. If you play well, you get to live your dream. I haven’t given up on that yet.

“But if I don’t ever live it, I’ll know I did handle the pressure once. And I also know, in the grand scheme of things, it’s great to have success in golf but it isn’t that important.”

Kim, 23, a former Stanford standout who won the U.S. Junior Amateur in 2004, shot a 4-under-par 68 Thursday to stay atop the leaderboard through 54 holes of the first-stage Q-School qualifier at Grasslands Golf & Country Club in Lakeland, Fla. 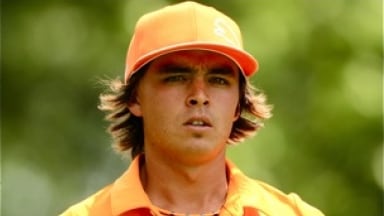 Rickie Fowler likes PGA Tour Q-School just the way it is and is wary of a new proposal that threatens to end the qualifying system as we know it. 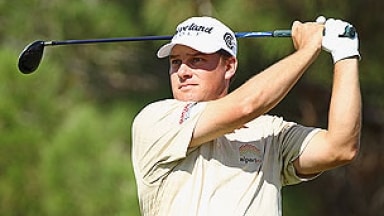 A trip to Q-School? Roland Thatcher isn't worried. When you live on the edge of the top 125, it comes with the territory.