Fashion: Dress-ing to the nines at Bay Hill 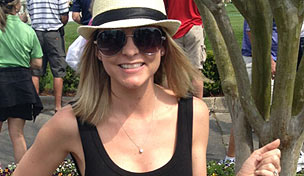 Getty Images
NEWPORT, WALES - JUNE 03: James Morrison of England in action during the first round of the Celtic Manor Wales Open on The Twenty Ten Course at The Celtic Manor Resort on June 3, 2010 in Newport, Wales. (Photo by Andrew Redington/Getty Images)  -

ORLANDO, Fla. – The Arnold Palmer Invitational is Orlando's premier golf event, so why wouldn't the Bay Hill babes 'dress' to the nines? That's exactly what they did Saturday, where even the fear of thunderstorms didn't rain on their fashion parades.

Here's a look at some of my favorite spectator looks on-site at Bay Hill on Saturday:

You wouldn't know it just by looking at Erica – she's dressed like a seasoned spectator – but this was her first time at the Arnold Palmer Invitational. Her cool and care-free maxi dress is paired perfectly with a skinny glitter belt, matching fedora and Coach purse. Elise's look is similar to Erica's (above) because it's a can't-miss choice for golf spectating attire. Elise pairs her green maxi dress and fedora with a statement necklace from JustFab.com and a Nine West wristlet. Morgan shops local for her Bay Hill get-up – her dress and belt came from a Lake Mary, Fla. boutique named Sophie & Trey. She pairs the springtime stripes with pearls on her ears and wrist. It's her first time to the API and Morgan said her boyfriend encouraged her to wear a dress and fun jewelry ... because he knows that's what all the PGA Tour wives and girlfriends wear. Morgan said the dress was super comfy and she would have worn it anyway. Jamie is a beginner golfer – her boyfriend is teaching her – and it's her first time at the API. She's dressed in head-to-toe Target apparel and said she only had to try on one outfit this morning because 'you can't go wrong with a sundress.' No, Jaimie, you can't.