Feeling the squeeze: Lack of Honda star power cause for concern? 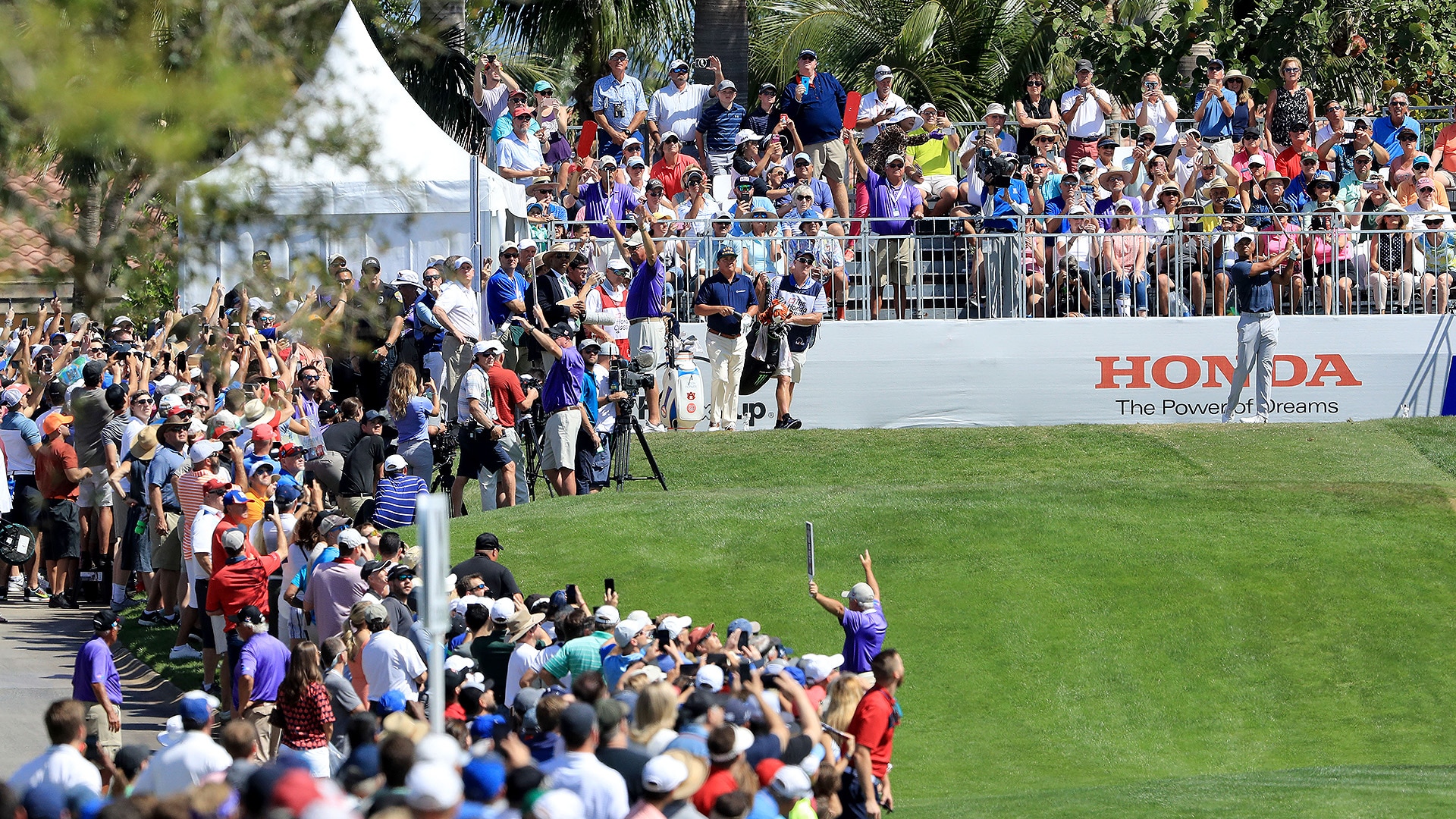 PALM BEACH GARDENS, Fla. – The Honda Classic was larger than life at inception.

Jackie Gleason gave it more star power than any player could, including Jack Nicklaus and Arnold Palmer, who both played in the inaugural event back in 1972.

Gleason wasn’t just the tournament host. He was “The Great One,” a mega star as Ralph Cramden of “The Honeymooners” TV fame.

After the growing importance of title sponsorship pushed out celebrity hosts like Gleason, and after Miami’s Doral event, Palmer’s own tournament and The Players Championship left Honda weakened in their growing shadows in the Florida swing, Tiger Woods came along. He didn’t reinvent the Honda Classic. No, Ken Kennerly did that, but Woods was the important final piece in the executive director’s impressive rebuild.

Woods took over as “The Great One,” elevating the Honda Classic back to elite, must-see status.

Long-time fans of this event could almost hear Gleason’s iconic catch phrase when this week’s field list was released.

Woods isn’t the only big-name player skipping the event.

Dustin Johnson, Rory McIlroy, Justin Rose and Patrick Reed are among those Kennerly wooed over the years in his rebuild. They’re all taking passes. So is some of the European contingent that helped Kennerly build the foundation that got Woods’ attention before Woods even moved to South Florida.

Just six players among the top 25 in the Official World Golf Ranking are here this week. That is Honda’s weakest showing since the event moved to PGA National in 2007, since Kennerly was put in charge.

Back in 2014, the Honda Classic featured the top three players in the world rankings, four of the top five and seven of the top 10.

Justin Thomas, Brooks Koepka and Rickie Fowler are the only players from the top 10 in the field this week.

The Honda Classic isn’t a lesser stage than it’s been for more than a decade. It’s just the first event to suffer the downside in the PGA Tour’s new schedule, which was tightened to end the season before the NFL really gets going. The new schedule was also reconfigured to spread out the PGA Tour’s most important events.

This more muscle-bound schedule is squeezing Honda’s place in the order of things.

“The sad thing in all of this is that somebody’s got to get hurt,” Kennerly said. “Unfortunately, if you look at the one most affected, it’s the Honda Classic. It’s just a fact.”

Kennerly says the new schedule is probably best for the overall tour.

“Unfortunately, I understand it,” Kennerly said. “What I don’t care to understand is why we are the ones in this position.”

“We’ve had discussions with the PGA Tour,” Kennerly said. “We know the Tour will work with us. We don’t know what that means.”

“We have built what I consider a championship caliber tournament, and I think it still is,” Kennerly said. “I think a great champion will come out of it.”

Gary Woodland said players have to give up events they like to be prepared for the biggest events.

“There are a lot of tournaments right in a row, that are really good,” Woodland said. “I skipped Riviera, which is one of my favorite tournaments. I’m in stretch of playing five out of six right now.”

“It’s taking guys time to figure out what works and what doesn’t,” he said. “It’s complicated.”

Kennerly has built a foundation that should help the event thrive without the biggest stars. Even before Woods started playing the tournament in 2012, Kennerly turned the event into a Palm Beach showcase, a place to be seen. There’s the Bear Trap party pavilions down around the 16th green and the entire 17th hole. There are concerts in the evening and fireworks shows.

“Strategically, we really marketed this event from the whole entertainment side, to create an environment that is about more than professional golf,” Kennerly said. “I’ve said since 2007, we are in the entertainment business. We are not in the golf business. The PGA Tour and the golf will take care of itself.

“One of my concerns early on was if you are always relying on the quality of the field, and who’s playing, to determine your success, it’s going to be a problem. We’ve created a business model that is sustainable, in good times and bad. I’m not saying we have a bad field, just a less highly-ranked field than we’ve had in the past.”

Kennerly believes more star power will be wooed back.

“We continued to grow through the non-Tiger years,” Kennerly said. “We were growing at a time when people might have thought we shouldn’t be growing.

“I think in two years, we’ll look back and say we had a little blip.”