'Feherty' Out of Bounds: The Bob Knight interview 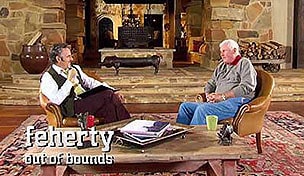 Getty Images
NEWPORT, WALES - JUNE 03: Chris Wood of England hits his second shot on the 16th hole during the first round of the Celtic Manor Wales Open on The Twenty Ten Course at The Celtic Manor Resort on June 3, 2010 in Newport, Wales. (Photo by Andrew Redington/Getty Images)  -

NCAA basketball coaching legend Bob Knight recently sat down for an interview on Golf Channel's 'Feherty.' Knight, who lead Indiana University to three national championships, opened up on everything from his coaching style and why he avoided taking it to the NBA, to how he would fair as a golf coach.

Check out extra clips from 'Feherty' below:

• Knight's windtalkers on the court

• Knight on the golf mindset

• Knight as a golf coach