Like old times, Couples in contention at the Masters 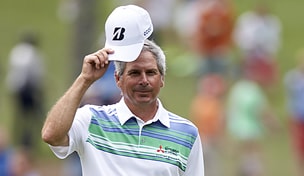 For all those who tuned into the season’s first major title bout don’t adjust your channel, you haven’t stumbled onto a Champions Tour event, although a quick once-over of Friday’s leaderboard had a distinct over-50 feel.

Fred Couples, all 53 years of smooth swinging swagger, “butchered” the seventh hole, rebounded with birdies at Nos. 8, 12 and 18, and enters the weekend chasing history – again.

Last year, the king of cool entered the weekend tied for the lead but faded with a 75-72 finish. In 2010, he began the back nine Sunday with visions of a second green jacket dancing through his often misunderstood mind only to finish alone in sixth place.

“It seems like the same old course for me,” said Couples, who posted a 71 Friday and was tied for the lead.

And the same old Freddie.

The Masters and Couples is, in every way, a perfect marriage, complete with good times and bad.

Photos: Couples through the years

If there was a senior division at the annual invitational at Augusta National Couples would be a stone-cold lock, but behind the smooth exterior is a competitor that has his gaze fixed on the championship flight, regardless of his status among the AARP set.

“When he comes here it is a course that just fits his eye,” said Couples’ caddie, Cayce Kerr. “He’s so happy, it’s exhilarating. He enjoys the walk.”

And we enjoy the watch. It’s impossible not to.

If Jack Nicklaus’ historic victory at the former fruit nursery in 1986 was one for the ages, a Couples championship on Sunday would be one for the ageless.

Blame it on technology, which has allowed Boom Boom to maintain a respectable driving average this week (he’s currently ranked near the top of the field with a 284-yard average); genetics; Anatabloc, the anti-inflammatory medication that Couples’ endorses; or, maybe most importantly, experience.

On a day that featured swirling winds that baffled many younger players, the ageless sage seemed unfazed.

“My caddie has a wind chart and the wind was blowing downwind on No. 2 so three hours later, you go back and you stand on the 12th tee. You can’t stand there and say I know it’s coming into my face, but I’m not really sure. But I feel pretty comfortable on some of these shots,” Couples said.

Whatever the tonic, Augusta National is the ultimate anti-aging cream for a man who will enter the World Golf Hall of Fame next month.

There was no surprise as Couples completed his round in gusting winds that kept the field guessing on Day 2. Not from Freddie, not from the Masters masses who so easily shun the status quo when it comes to Couples.

Not that Couples gave himself much of a chance of making history earlier in the week. During Wednesday’s Par 3 Contest, he hit the ball so badly he did the unthinkable – racing to the practice tee for an emergency session that lasted 45 minutes. The turnaround, said Kerr, was nothing short of miraculous. The result, at least through two laps, has been downright magical.

If a 53-year-old champion is not exactly the norm, Augusta National has a history of honoring its elders, and it’s not just Couples. Just three spots down the leaderboard sits 55-year-old Bernard Langer, who has posted matching 71s this week and is tied for 13th.

“I always thought Freddie with his length could win it,” Langer explained. “We’re just as good as ball-strikers as the young guys, just not as long.”

If a Couples/Langer shootout on Sunday is enough to send 50-somethings everywhere into a frenzy, know there will be collateral damage if such a scenario – however unlikely – plays out. Just a hunch, but the long putter – which both use – likely wouldn’t survive the weekend if those two defied the odds.

Couples, however, has made conventional wisdom a five-stroke underdog at Augusta National. As strange as it may seem that on the same day a 14-year-old was issued a one-stroke penalty for slow play a 53-year-old would race into the hunt, it is what we’ve come to expect from Couples.

In a moment of déjà vu, Couples was asked what he would do on Sunday if he shattered the grey ceiling on Sunday and collected his second green jacket 21 years after donning his first.

That’s funny coming from a guy who has always made it look so easy.