Couples a natural fit at Riviera 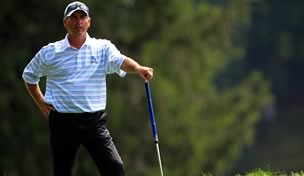 The Iron Curtain still separated the Soviet Union from the rest of the world.

The Berlin Wall was still standing.

You get the idea, Couples, 53, has played the Northern Trust Open a long time.

Back in 1982, Couples teed it up at Riviera for the first time in what was then called the Glen Campbell Los Angeles Open. Gene Littler, Don January and George Archer were in the field. Couples tied for 13th, but it was the beginning of a love affair. Couples said he was smitten by Riviera right from the start.

This week will mark the 31st time Couples plays this event. Nobody has played it more.

Here’s the thing, though. Couples never comes here thinking he just wants to play Riviera again. He comes thinking he wants to win here again. He’s still thinking that way as he sets out to try to win his third title here. While Couples doesn’t get excited about competing against the younger PGA Tour pros at most events these days, he relishes the challenge here. Something about Riviera makes Couples feel young again. That’s why he accepted another sponsor’s exemption to play this week.

Phil Mickelson, Ernie Els, Luke Donald, Lee Westwood, Dustin Johnson, Bubba Watson, defending champ Bill Haas, Webb Simpson and Keegan Bradley help make up a strong field, but Couples feels up to taking on all comers at this venue. Couples wouldn’t mind adding a 16th PGA Tour title to his collection before he’s inducted into the World Golf Hall of Fame in May.

“I’m not going to lie to you,” Couples said. “If I’m playing well, I can walk around this course and feel like I’m going to shoot par, or very close to it, every time.”

Odds, of course, aren’t in favor of Couples winning. If he does, he will break Sam Snead’s mark (52) as the oldest player to win a PGA Tour event.

Couples won at Riviera in 1990 and ’92 and has finished second three other times. He was in contention on Sunday just two years ago before fading to a tie for seventh.

“I’ve had a lot of great finishes here, and a lot of close chances to win,” Couples said.

Couples says Riviera reminds him of the golf courses he grew up playing.

“I grew up in Seattle,” Couples said. “The greens were really small.

“I feel like you have to be a really, really good iron player here . . . You don’t want to miss any of these greens. You have to be careful how you approach this course.”

Riviera’s a shot maker’s course, Couples believes. That’s why he is puzzled by the disconnect Tiger Woods has with the event. Woods, who grew up 40 miles south of Riviera, played the L.A. Open 11 times but hasn’t been back since withdrawing with the flu here halfway through the 2006 tournament. It’s the tournament Woods has most played without winning.

Couples says he doesn’t feel guilty playing on a sponsor’s exemption that might go to a younger player if he weren’t playing.

Couples would prefer to come back as a defending champ.