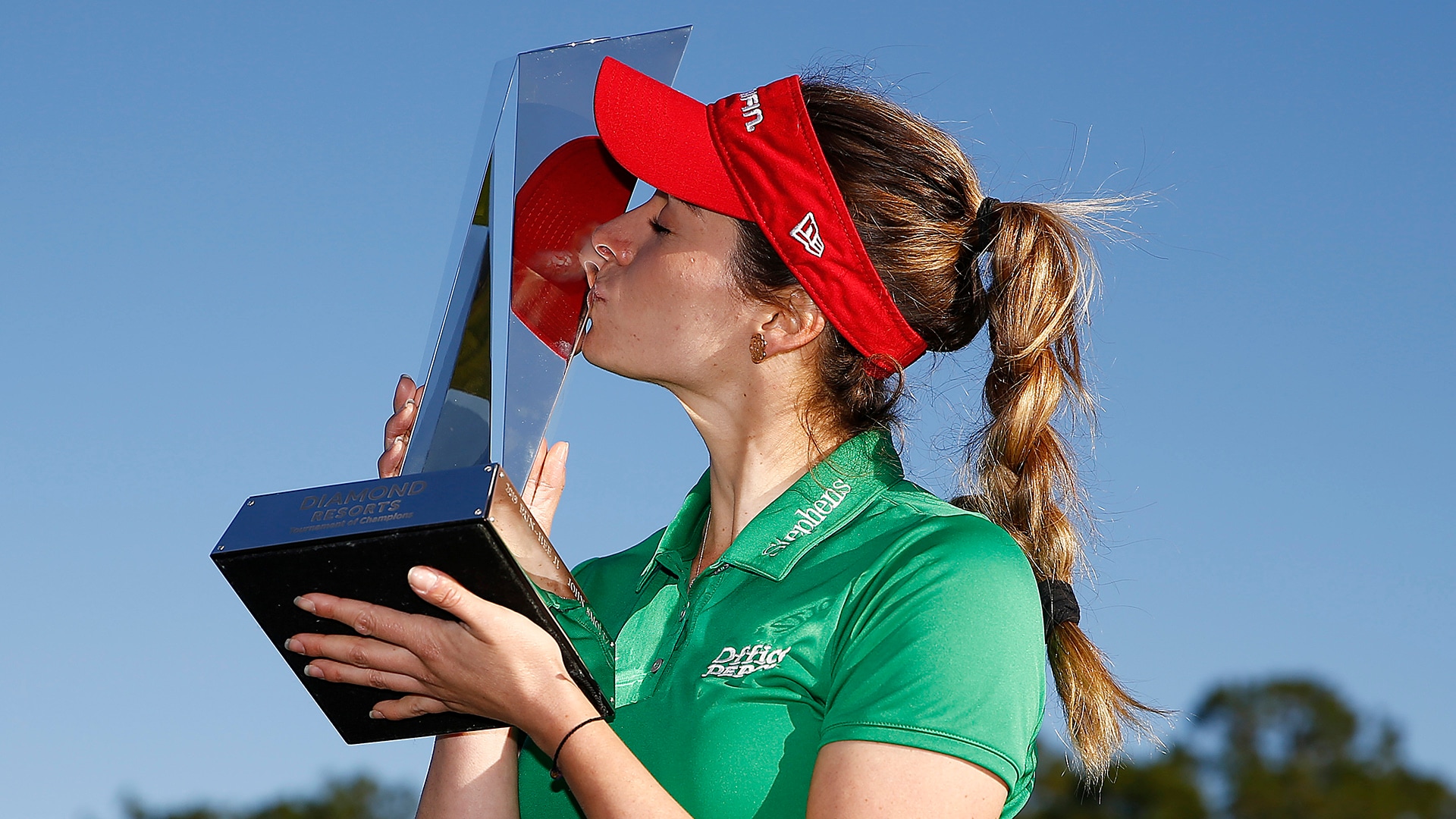 LAKE BUENA VISTA, Fla. – Gaby Lopez knows she is a seedling of sorts.

She knows she is one of Lorena Ochoa’s gifts, nurtured as a legacy of one of Mexico’s great athletes and ambassadors. She knows she’s part of what the former world No. 1 Ochoa dreams will flourish into a garden.

So, Lopez relished the message she received from Ochoa Saturday night, after Lopez got herself into contention to win the Diamond Resorts Tournament of Champions.

“Lorena sent me a text,” Lopez said Monday morning after rolling in a 25-foot birdie putt at the seventh playoff hole to win the Diamond Resorts Tournament of Champions. “She said, `Hey, I really hope you enjoy the last round, with lots of birdies coming your way.’”

Ochoa, the winner of 27 LPGA titles, offered some advice at the end of that text.

Lopez had no idea how important that would be.

“I had no idea I would have to be patient for seven more holes,” she said.

“She has been my inspiration my whole life,” Lopez said.

Lopez held off then world No. 1 Ariya Jutanugarn and No. 2 Sung Hyun Park to win the Blue Bay LPGA late in 2018 for her first victory, joining Ochoa as the only players from Mexico to win LPGA titles. Lopez validated that breakthrough in equally impressive fashion this week, beating world No. 5 Nasa Hataoka and Hall of Famer Inbee Park in the Diamond Resorts playoff.

Adding to Ochoa’s legacy means a lot to Lopez, because Ochoa continues to do more than inspire her. Andres Conesa, Ochoa’s husband, is the CEO of Aeromexico, one of Lopez’s sponsors.

“We talk a lot,” Lopez said. “They do a great, great, great job of staying close with me. They are always sending me texts, being close. ... Lorena is always asking, `What do you need from me? I’m here and pulling for you.’ To be able to just feel that closeness from her, being able to feel that friendship...”

After Diamond Resorts CEO Mike Flaskey presented the trophy, Lopez peeled off her cold-weather gear, to show off Mexico’s colors, the red, white and green she wears in final rounds. She did so for the traditional winner’s photo shoot with the trophy, even though a frigid wind made the 45-degree temperature feel even colder.

Lopez said she fell in love with golf representing Mexico in those colors when she was a junior, playing in team events in the United States.

“I'm extremely proud to represent Mexico, especially because we now have two Mexicans on the tour,” Lopez said. “For a long time, it was Lorena only.”

Now, it’s Lopez and Maria Fassi, the NCAA Player of the Year in 2019 and fellow University of Arkansas grad. Lopez hopes she and Fassi will continue to help grow Ochoa’s garden.

“I'm really hoping that a good 10 Mexican girls can jump in the LPGA, and we can all travel together and achieve our dreams together,” Lopez said.

It’s an Olympic year, and Lopez would like nothing better than to represent Mexico in Tokyo this summer. She did so in 2016 in Rio de Janeiro, where she tied for 31st. With this victory, the possibility of winning a medal for her homeland doesn’t seem like a reach. Lopez, though, doesn’t want to get that far ahead of herself.

“Tokyo is one of my goals,” Lopez said. “More than a medalist, it’s being able to get there the most prepared I can. I just need to stay on top of every little thing. I can’t really think of the medal. I can really only think of the moment, what I’m doing today to get ready for tomorrow.”

Ochoa retired at 28 to start her family, while still holding the world No. 1 ranking. After winning Monday, Lopez’s thoughts turned to family, too. She dedicated her first title to her grandfather, Jose Lopez,. He died a month before she won the Blue Bay in China. She dedicated the Diamond Resorts victory to her grandmother, Vania, who was Jose’s wife. Vania watched Monday’s finish with Gaby’s father.

“I just FaceTimed them,” Lopez said. “She was there. I was like, `My first win was for grandad, and this one is for you.’”

In her victory speech at the trophy presentation, Lopez thanked the Mexicans she knew were among the grounds crew that helped set up Tranquilo Golf Club all week. Lopez called them all “gardeners.” That’s right out of Ochoa’s playbook, where Ochoa would take time to honor the Mexican workers at the courses she played.

“Lorena started this tradition,” Lopez said. “She was No. 1 on the golf course, but she was so humble.”

Lopez is proud to keep Ochoa’s traditions going as a seedling of sorts.