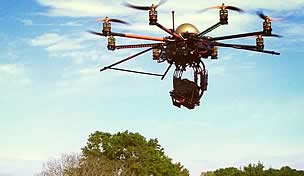 If you see a tiny helicopter roaming the skies at Bay Hill, don’t run for cover.

Golf Channel is merely testing out its Hoverfly, an unmanned helicopter equipped with a camera, for “On The Range” at 8 p.m. ET Wednesday. (Watch video here and here).

According to USA Today, the helicopter has been used on such shows as NBC Sports Network’s “Ultimate Fishing Experience” and Animal Planet’s “Hillbilly Handfishin’.”

For Golf Channel’s purposes, the Hoverfly will show how players are getting ready on the range for this week’s Arnold Palmer Invitational in Orlando. The gadget will not be used during tournament play, but if the test runs are positive, it certainly could make an appearance at a later date.