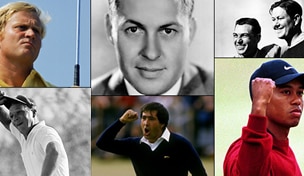 Statistical bios for the players competing in Golf Channel's Ultimate Match Play Championship, in order of seed. Click here to vote in the finals!

Ultimate fact: The only player to win all four professional majors consecutively, and one of only two to win the career Grand Slam three times over.

Ultimate fact: Won five majors after a life-threatening car accident in 1949, including all three in which he entered during the 'Hogan Slam' of 1953.

Ultimate fact: Holds the record for most official PGA Tour wins, and is credited with at least 135 worldwide victories.

Ultimate fact: Won 18 times on the PGA Tour in 1945, including 11 tournaments in a row - both records that stand today.

Ultimate fact: Recorded 163 worldwide wins during his career and is one of only five players to win the modern-day career Grand Slam.

Ultimate fact: Won the Open Championship five times, including four in Scotland, where he will return in 2014 as captain of the U.S. Ryder Cup team.

Ultimate fact: Struck the 'Shot heard round the world,' a 4-wood holed for a double-eagle 2 on the 15th hole at Augusta National en route to winning the 1935 Masters.

Ultimate fact: Won the 1966 U.S. Open at Olympic Club in a playoff despite trailing leader Palmer by seven shots with nine holes to play.

Ultimate fact: Completed an unprecedented international sweep in 1971, winning the U.S., British and Canadian Opens in the same season.

Ultimate fact: Competed in more Ryder Cups (11) and accrued more individual points (25) than any other player in the event's history.

Ultimate fact: Holds the record for most career European Tour wins on the circuit from 1976-95. Won 91 times around the world.

Ultimate fact: Won the 1991 Northern Telecom Open at age 20 while still enrolled at Arizona State, becoming just the second amateur to win on the PGA Tour since 1954.