On Monday, June 3, a team of more than 50 reporters and production professionals corresponding live from 13 locations around the United States for 17 consecutive hours – what Golf Channel has coined GOLF’S LONGEST DAY – will chronicle U.S. Open Sectional Qualifying, when nearly 1,000 amateur and professional golfers of all ages attempt to qualify for less than 70 spots available to compete in the U.S. Open Championship.

Starting at 7 a.m. ET and continuing until all the final results are tallied at around Midnight ET, Golf Channel will feature interviews, analysis, highlights and scoring updates from 11 U.S. Open Sectional Qualifying locations in the U.S., as well as insight from experts located at Merion Golf Club – site of next month’s U.S. Open – and Golf Channel studios in Orlando.

GOLF’S LONGEST DAY will be a colossal television and digital undertaking, originating across multiple platforms.  Television coverage will be hosted by Rich Lerner and Steve Sands from Golf Channel studios, while content produced from Golf Channel’s new digital studio will be hosted by Whit Watson and Ryan Burr.  For fans on the go, streaming content will be available via GolfChannel.com and the Golf Live Extra app, from 7 a.m. to Midnight ET.  The 10 a.m. – 1 p.m. coverage originating exclusively from the digital studio will be available to everyone online and on mobile devices.  Each platform will showcase stories of grit and determination by golfers trying to realize lifelong dreams, as well as those golfers trying to resurrect a career in order to make it back to golf’s brightest stage.

GolfChannel.com also will serve as a source for U.S. Open qualifying news and information, with feature stories written by correspondents in the field, scoring updates and posting social media content from Golf Channel reporters covering the Sectional events.  Fans also can join the social media conversation in Golf Channel's social lounge (www.GolfChannel.com/SocialLounge), and follow @GolfChannel on Twitter and Instagram using the hashtag, #RoadToMerion.

Making his Golf Channel debut is new anchor/reporter George Savaricas, who comes to the network from KVOA-TV in Tucson, Ariz. 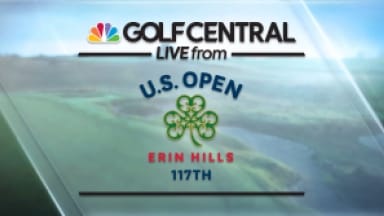