Good to be King: Palmer dining with model Upton 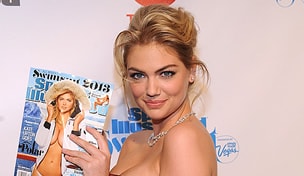 ORLANDO – Arnold Palmer bought Bay Hill Club & Lodge because he loved the golf course and wanted it for his own, not having any idea where it all would lead.

Now his name adorns a PGA Tour event that has been a staple of the Florida swing for 35 years. It's also carried by two hospitals that specialize in children — one named after his late wife, Winnie, and where more than 93,000 babies have been born since 2006.

Oh, and he's having dinner with Kate Upton this week.

'Did you see this?' Palmer said, holding up the Sports Illustrated swimsuit issue with Upton on the cover. 'She's coming here. Did you know that?'

He put it back on his desk, gave it one last look, and then grabbed a stack of papers to place over the magazine.

'I better cover this up,' he said.

He grinned. The man is timeless.

How a supermodel wound up at Bay Hill explains so much about 83-year-old Palmer, who built his kingdom by being a man of the people.

The manager for Upton is Lisa Benson, whose father is from Punxsutawney, Pa., and used to play golf regularly with Palmer at Latrobe Country Club. She was looking for a job at IMG, which, in addition to managing sports and entertainment, also represents top models. Her father talked to Palmer, who talked to IMG to arrange an interview. She got the job and years later connected with Upton.

Upton grew up in Melbourne on the central coast of Florida, and her parents were huge Palmer fans. Given the back story, Upton thought it would be a great idea to come to Bay Hill, meet with Palmer and see the work he is doing with the hospitals. She also plans to take part in a social media campaign involving the 'Arnold Palmer' tea drink.

So in a roundabout way, a casual round of golf leads to dinner with a supermodel?

'That's been a fun deal,' Palmer said when he finished telling the story.

There have been thousands of casual rounds like that for Palmer, whose passion for golf never dies. There have been more friends than he can count. There are probably more stories like this, all because he takes an interest in people.

Brad Faxon surely had Palmer in mind when he said years after a golf trip, 'I wish we had more guys on Tour who liked meeting people.'

Palmer is one of those guys. Always has been. And that's why so many people want to meet the King.