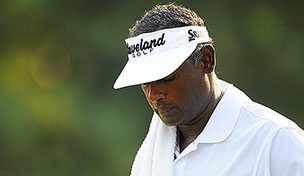 Vijay Singh has withdrawn from the Waste Management Phoenix Open, and it remains to be seen whether it will be his last PGA Tour event for a while.

Tom Pernice Jr., one of Singh’s closest friends, said Thursday that the 49-year-old Hall of Famer should continue to play his normal PGA Tour schedule until told otherwise.

“Nothing has been decided,” Pernice said on “Morning Drive.” “He’s an independent contractor, a member of the PGA Tour until the commissioner says he’s not able to play. There’s an appeal process that he’s probably able to go through. It should be up to him.”

Pernice said that Singh injured his back on the range Tuesday at TPC Scottsdale and left the course unable to swing. He received treatment in his hotel room all day and night Wednesday, Pernice said.

Singh withdrew from the event around 10 a.m. ET.

The PGA Tour could decide to suspend the 49-year-old Hall of Famer for admitting to using a banned substance.

Pernice, however, disagreed with the premise that Singh should automatically be suspended. Pernice cited the Mark Calcavecchia case, from August 2011, when he was told by the Tour to stop using the “Ultimate Spray.” Though he was not suspended, Calcavecchia did not compete in another tournament for the rest of the season.

“Based on that analysis, not knowing that he was taking something that was illegal, Calc wasn’t suspended, quit using the product, was fine and nothing happened,” Pernice said. “I don’t know why this same instance isn’t true for Vijay.”

Asked if Singh would ingest a substance without knowing exactly what it was beforehand, Pernice said: “Vijay is pretty open to doing and trying something. I don’t know that Vijay and his personality will be as worried as he should be about what he’s doing or taking. … Obviously he was trying this product for whatever reason, whether it was for rehabbing or more strength or more energy, I don’t know.”