Goosen, Furyk in crowd near top of Texas leaderboard 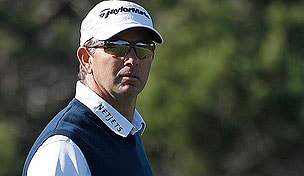 SAN ANTONIO – After his second round at the Valero Texas Open, Retief Goosen pressed both hands onto the small of his back. He bounced on his tippy-toes. He swayed from side to side.

And this, he says, is the healthiest he has felt in five years.

Disc-replacement surgery last fall saved Goosen’s career. At the time, he thought of giving up the game, doing something else, but a surgeon in London “guaranteed” that his back would feel better after the procedure.

“It was a big decision,” Goosen, 44, said Friday. “Surgery is the last thing. But at the end I just couldn’t play golf anymore. If the surgery didn’t work, I still couldn’t play.”

It’s been an arduous climb back to relevancy, from walking without pain a month after surgery, to hitting balls after four months, to playing in a tournament – the Volvo Golf Champions in South Africa – where he would have been in contention if not for a balky putter (tied for 20th).

At 5-under 139, he’s one shot off the lead here at TPC San Antonio, his best position through two rounds, post-surgery.

This is Goosen’s fourth consecutive start, a tall task for a rehabbing body, but he arrived here with one goal, the same one that fueled his brilliant play in the early 2000s: to win.

A victory, after all, gets him back into the Masters, a tournament he has missed only once since 2000.

But he’s far from the only aging warrior with an eye on Augusta.

That helps explain why Jim Furyk, 42, is tinkering this week. On Thursday, he experimented with two drivers – a 9.5-degree and his usual 10.5-degree – in preparation for Augusta. Unlike Phil Mickelson in 2006 and ’11, who went with the two-driver approach to hit a draw and fade, Furyk simply is looking for more pop off the tee. Just like the rest of the veterans.

Really, though, he’s just searching for something, anything, as he hasn’t finished inside the top 10 at Augusta since 2003. And the window for a 40-something champion is closing, rapidly.

It’s why Furyk didn’t mind adding this event to his schedule, despite TPC San Antonio’s tough-guy reputation. He prefers to play his way into shape, and the thought of taking off three weeks before the year’s first major was unappealing. Turning up at Houston wasn’t an option either, because Redstone Golf Club is a high, right-to-left, bombing golf course. “And I’m not any of those three,” he said, smiling.

This Greg Norman-designed track ranked as the second most-difficult non-major track on the PGA Tour last year, meaning birdies are scarce for the 19 players who are here for one final test run before Augusta. That didn’t bother Furyk – “There aren’t that many birdies at Augusta anymore, either,” he grumbled – nor did the lack of preparation, having played only four holes during Wednesday’s pro-am because of inclement weather.

“I feel like I gain momentum as I play,” said Furyk, who then headed off to the range, for more experimentation and Masters preparation.

Goosen seemed determined to join him, both on the range and at Augusta. But only after a bit more stretching.