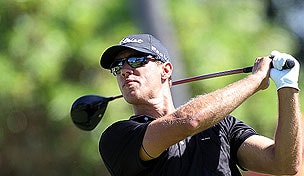 The USGA and R&A have jointly proposed that all golfers must stop anchoring their putters by the beginning of the 2016 season. Some pros, though, are establishing a ban of their own beforehand.

After underwhelming rounds of 71-70 at the Humana Challenge, Graham DeLaet decided to bench his usual anchored style in exchange for fellow competitor Luke List’s backup standard-length putter in Saturday’s third round. The result? An opening-nine 6-under 30 on the Nicklaus Course which became a 65, vaulting him above the cut line entering Sunday.

Using the shorter putter once again on Sunday, DeLaet posted a 3-under 69.

The move should serve as noticeable not only because DeLaet made the switch, but because he found success with it – short term though it may be. Many have inquired as to whether other successful young players – Webb Simpson and Keegan Bradley are the first who come to mind – will fail to be effective once the ban becomes official. This should serve as a bit of promise that it may not.

Anchored putting is expected to be a main topic at this week’s upcoming players’ meeting at Torrey Pines, with USGA executive director Mike Davis reportedly serving as a guest in the meeting.