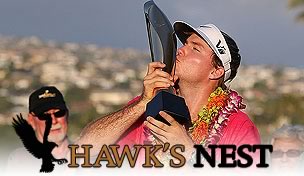 Getty Images
CROMWELL, CT - JUNE 25: Charlie Wi of South Korea prepaes to play a shot during the second round of the Travelers Championship held at TPC River Highlands on June 25, 2010 in Cromwell, Connecticut. (Photo by Michael Cohen/Getty Images)  -

BACK WHEN I covered tackle football for a living, I was doing a piece on Oklahoma State running back Barry Sanders, who was eliminating all suspense in the balloting for the 1988 Heisman Trophy. At some point in the story, I used the word “athleticism,” which did not fly with my friends on the copy desk.

“That’s not a word!” the editor shrieked, a verdict I appealed all the way to the supreme court, where the guy who ran the sports department looked up “athleticism” in three dictionaries, couldn’t find it, then ruled against me.

Amid the slew of college bowl games and NFL playoff tilts, I chuckle every time I hear some analyst use the word “athleticism” to describe some freakish linebacker or oversized wide receiver. This happens about 35 times per telecast, so if Noah Webster didn’t acknowledge the noun in the early 19th century, we’re getting it rammed down our throats 200 years later.

Thank goodness I don’t have to hear it when I’m watching golf.

THERE ARE TWO ways of looking at Russell Henley’s ultra-impressive victory in his official PGA Tour debut at the Sony Open. Many of us will see a kid who won his first start as a Tour member and declare him as the Next Big Thing, which has been the kneejerk reaction among the droolers for as long as they’ve been cutting 18 holes in the grass.

As an alternative, you might consider a similar situation that occurred just two years ago, when Jhonattan Vegas won the Humana Challenge in his second career event, then almost won at Torrey Pines the very next week. To say Vegas would soon vanish off the face of the competitive earth sounds a bit harsh, but it’s not inaccurate. He has just three top-10s in 47 tournaments since and really hasn’t contended on Sunday.

Now I know Henley was cut from a finer cloth than Vegas as prospects go, but one of the guys he held off in Honolulu Sunday was Charles Howell III. Among the post-Tiger Woods phenoms, there wasn’t a better college player than CH3, whose Tour performance has fallen far short of expectations: two victories in 365 starts.

We’ve seen a number of unproven players launch their careers on the West Coast Swing – Mark Wilson immediately comes to mind – then fail to sustain that level for any significant length of time. Henley certainly appears capable of becoming a top-tier player, perhaps even a fixture on the U.S. Ryder Cup team, but there was a time not so long ago when Anthony Kim was going to rule the universe.

The fact that Henley beat Howell and Tim Clark, two of the game’s most decorated second-place finishers – a whopping 24 runner-ups but just three Ws – means as much or as little as you want it to mean. Yes, the kid shot a 63 to win by three, but nobody applied any real pressure on him in the final round. Considering the relevant data involved, this should come as no surprise.

FOR ALL THERE is not to like about the PGA Tour’s two celebrity-splashed pro-ams – six-hour rounds, the Bill Murray factor, the multi-venue formats – I enjoyed covering those tournaments for one reason: atmosphere. The size of the galleries and the energy level of those in attendance is often the difference between a fun event and a boring one. Simply put, you can’t simulate excitement.

This week’s Humana Challenge has never gotten the public affection generated by the gatherings at the AT&T Pebble Beach National Pro-Am, which has more stars and a sexier setting, but if you like watching pro athletes chop it around without dealing with crowds that run five or 10 deep, Palm Springs is the better place.

The greatest pro-am story I ever heard came from the former Hope. Phil Mickelson was playing with NFL great Lawrence Taylor, who is supposedly a decent golfer but was having a tough day. On one hole, LT drove his ball into outer space, and then vanished for 10 or 15 minutes. Mickelson, meanwhile, hit the green and had a mid-range putt for birdie, which he struck beautifully and was tracking toward the center of the cup.

Out of nowhere, another ball arrived on the green in a hurry – a screaming line drive headed straight for the players and caddies. It landed on the front of the putting surface, took one sharp hop, then began rolling briskly until it collided with Mickelson’s ball about 2 feet short of the hole.

All heads turned in the same direction. There was LT, trudging greenward with a bewildered look on his face. “Hey, you guys seen my ball?” he asked. Everybody laughed, including Mickelson, but it wasn’t long before he asked out of the Hope’s celebrity draw, then stopped playing in the tournament altogether.

OF ALL THE famous types I saw pass through Pebble Beach’s 18th green and into the herd of gallery worship, nobody caused more commotion than New England Patriots quarterback Tom Brady. You forget how big those guys are, but then, a lot of guys are 6 feet 4, and a fair amount of them are built like a male stripper.

I watched Brady deal with the throng for a good 15 minutes, throwing the aw-shucks disposition at everyone and posing for photos like a boy scout. The guy has a magnetism that is hard to define and almost impossible to ignore, and while I’m sure the fact that Brady is from the Bay Area had something to do with his popularity that day, it was pretty hard not to think he was the coolest thing since ice-cream cake.

No, Giselle was not with him.

SPEAKING OF THE Patriots, New England and Pittsburgh were locked in a tight early-season battle when the triumphant 2005 U.S. Presidents Cup team entered the media center early that Sunday evening. It remains the closest the Internationals have come to beating the Yanks on American soil; Fred Couples and Chris DiMarco came up big down the stretch and the U.S. held on to win by three, but it was closer than the final score indicated.

That was the year Vijay Singh recommended that someone leave a cart behind the 14th green after he disposed of Couples, and thus, wouldn’t have to wait for transportation back to the clubhouse. Couples beat Singh, however, and when the entire U.S. squad came in for the post-victory press conference, a dozen of the world’s finest golfers collectively froze when the journey to the interview room took them near a television.

“We’ll go in after this is over,” more than one of them said. A slightly persistent PGA Tour official tried to convince the fellas that the final six minutes of Patriots-Steelers could take a half-hour to play.

“Too bad,” was the group response.

The U.S. team reluctantly made its way to the microphones a few minutes later, an amusing concession by a bunch of middle-aged guys who love golf but, at least on occasion, like football even better. With or without the frequent references to athleticism.