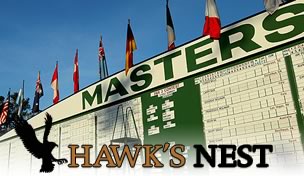 Come mid-August, I’ll be pleading for five minutes of moving air, but in Connecticut at this point in the year, golf really blows. The weatherman says 62 degrees and sunny. He neglects to mention the two-club breeze that gets old in a hurry, a nuisance for which I have no solutions a few rounds into the season.

The game can be hard enough in dead-calm conditions. When the wind is whipping relentlessly, I become preoccupied with a right-to-left ball flight, which is fine if you spend six hours a week on the practice range, bend it like Beckham or harness it like Hogan.

I do none of the above. My draw is like a 13-year-old boy – it doesn’t listen, and on those sporadic occasions when it does behave, it tricks me into thinking I can hit a bunch more just like it. This leads to a hook, then a 20-yard block, then a pathetic slice that meanders helplessly in the same gusts I had such high hopes of taming.

As the saying goes, April breezes bring swing diseases. I can’t wait to see what May has in mind. Until then, this is the perfect week to ditch my clubs, drown in my couch and overdose on the best little sporting event known to man.

LOTS AND LOTS of things make the Masters special, whether you’re playing in the tournament, on the grounds in any capacity or watching it on television. As much as there is to like about March Madness, college basketball’s grandest showcase has become a staggering submission to commercial excess. Everybody’s getting rich but the kids who provide the actual product, forging a giant hypocrisy that flies directly in the face of its original intent.

The Super Bowl is now a football game smothered in 60-second sales pitches for Doritos and Godaddy.com, then literally blanketed in smoke by a halftime show ostentatiously sponsored by a company that makes soft drinks. When a power outage halted play for 34 minutes early in the second half this year, symbolism turned into low-hanging fruit.

What happens in the game isn’t so important anymore. Not when Destiny’s Child reunites onstage for the first time in seven years.

At Augusta National Golf Club, a membership full of well-heeled men (and now two women), hosts a golf tournament at which the essence of competition and best interests of those watching – on-site spectators and TV viewers – remain extremely high priorities. That’s not to say the club has no financial motive. It just goes out of its way to cleanly disguise and/or downplay that factor.

Distractions and disruptions are eliminated at virtually any cost. No media inside the ropes, very few commercial interruptions, all bleachers and grandstands positioned away from the greens to avoid the occasional lucky carom or free drop – everything is done with a purpose. The golf is what really matters. (Video: Hawkins: Top five Masters in last 20 years)

By design, the club strictly enforces its tournament policies, very few of which are outlined or even posted. For instance, spectators are prohibited from running or even jogging while on the grounds. Cellphones? Don’t even think about it. Players aren’t allowed to hit a second or third ball during practice rounds.

When Tiger Woods birdied the second playoff hole to beat Chris DiMarco in 2005, I bolted from the media center and headed for the 18th green, where Woods had just won his fourth Masters. The gallery was at least five-deep, meaning I couldn’t see a thing, so I instinctively hopped onto the front of a nearby cart to see if I could get a better view.

A half-dozen security guys instantly converged on me – you’d have thought I’d just left a meeting with Julius and Ethel Rosenberg. For about 90 seconds, I was certain they were going to confiscate my media badge, which surely would lead to a lifetime ban. Maybe those rent-a-cops just wanted to scare the hell out of me. If so, mission accomplished.

There have been plenty of times over the years when I’ve bemoaned Augusta National’s old-world thinking or questioned a bunch of laws I didn’t know existed. Much like the Rules of Golf as a whole, they don’t always make sense on the surface. Once you realize the club’s primary mission during Masters week is to preserve and protect the competitive element, bewilderment turns into respect.

ANY ATTEMPT TO handicap the Masters field is, at best, educated guesswork. This isn’t a Kentucky Derby, where two or three horses are clearly superior (on paper) to the 12 or 13 others. At 3-1 odds on the services I’ve seen, Woods is the obvious favorite, but that doesn’t mean much when you consider where the last six champions stood in the world ranking at the time of their Masters victory:

And while we’re at it, this seems like an excellent time to debunk a few other Masters-winner myths.

MYTH: The course favors players with a right-to-left ball flight.

REALITY: We can talk all week about the shape of the holes and how a draw (for a right-handed player) works better, but Jack Nicklaus and his power fade did fairly well at the old ballyard. Fred Couples, who hardly ever hit a draw, has been one of the most consistent high-level performers in tournament history. In my 20 years of covering golf full-time, I’ve come to realize there are more right-to-left tour pros than left-to-right guys – but the L-to-Rs probably produce superior results.

Besides, shot shape doesn’t mean nearly as much as it once did. Equipment advances and changes to Augusta National have reduced the ability and importance of curving the ball. A venue once partial to a shot-maker’s skill and imagination is now more of a parkland-style course, conducive to position golf off the tee.

In other words, long and straight is a good idea.

MYTH: Only bombers win the Masters.

REALITY: Immelman. Johnson. Mike Weir over Len Mattiace in a playoff battle among singles hitters in 2003. Mark O’Meara (1998). Jose Maria Olazabal (1994, '99). Hey, driving it a mile is a great asset just about anywhere – one of the more valuable tools any golfer can own. The truth is, most of the top players in any era drove the ball a long way. And top players win green jackets, as the list of all-time greats who didn’t claim a Masters title is a fairly short one.

Johnson won his in ’07 by laying up on all the par 5s, which became the biggest news that week. Augusta National is the ultimate “second-shot course,” designed with an extreme emphasis on putting from score-able spots on each and every green. The lengthening of the par 5s hasn’t done a whole lot to prevent players from reaching them in two shots when weather permits. As the greens have gotten faster over the years, however, you’re better off with a flat 8-footer off a third-shot wedge than a 65-foot triple-breaker after a pair of mighty blows.

You’ve got to play smart. It’s another thing that will never change.

MYTH: You can’t win this tournament unless you have a terrific short game.

REALITY: Another one of those generalizations that applies to every golf tournament. Bubba ranked 158th in putting and 106th in scrambling on Tour last year. Schwartzel was 100th in sand saves and 102nd in putting the year before. It was often said that Nicklaus couldn’t chip, but nobody had anything negative to say when he was pouring in 15-footers. Bernhard Langer was a ball-striking machine, but not exactly money with the putter. His two Masters victories turn this theory into baloney.

Of course, Woods and Mickelson have two of the greatest short games ever – and seven wins at Augusta National to prove it. Olazabal was an absolute magician around the greens, but Steve Stricker, still widely recognized as one of the best putters in the game, hasn’t come close. You want to win a Masters? Shoot the lowest score, dude. Doesn’t matter how you do it.

• Woods (5-2) – A rare case of the bookies slightly underestimating Tiger’s chances. Red Shirt’s recent history has him in a very good place mentally, and I really think he woke up one morning around Christmas and realized he needs to get on the horse if he wants to catch Nicklaus. Has done everything well at various points this season. (Video: Hawkins: Four before; one more for Tiger?)

• Rory McIlroy (10-1) – I don’t like the slow starts: 73-73-72 in the first round at each of his last three tournaments. In his final tune-up at the Valero Texas Open, McIlroy’s sheer ability allowed him to make up massive ground on a star-deprived field and finish solo second, which is obviously a huge step forward, but this week is very different. This week, it’s big-boy golf, and giving away strokes on Thursday can prove just as costly as giving them away on Sunday.

• Mickelson (12-1) – He destroyed the field in Phoenix and finished T-3 at Doral, but I’m not quite sure what to make of him in the here and now. Sure, Philly Mick has putted better lately, but I still make it a point not to leave the TV when he’s standing over a 4-footer. Too good not to factor, but is he too dated to win it a fourth time? Only Nicklaus (1986) and Crenshaw (1995) were older than Phil is now. (Video: Hawkins: The Phil factor at Augusta National)

• Keegan Bradley (13-1) – The more I see, the more I like. A great competitor who arrives off four consecutive top-10s, and at this point, any self-doubt Bradley had about becoming one of the game’s best should be completely eliminated. This guy just doesn’t shoot many lousy scores; just three rounds higher than 71 among the 33 he’s played in 2013. If not this spring, put a green jacket on layaway.

• Justin Rose (15-1) – Some might say he has “quietly” emerged as one of the best in the world, but I don’t know how quiet Rose’s rise has been. Now drives it miles longer than in previous years, ranking ninth in average distance after going 84th, 99th and 97th. Very solid 2013 statistics overall, has gone T-8, T-11 and T-20 at the Masters since squandering a nice chance to win in ’07. If he’s not on your short list, you haven’t been paying attention.