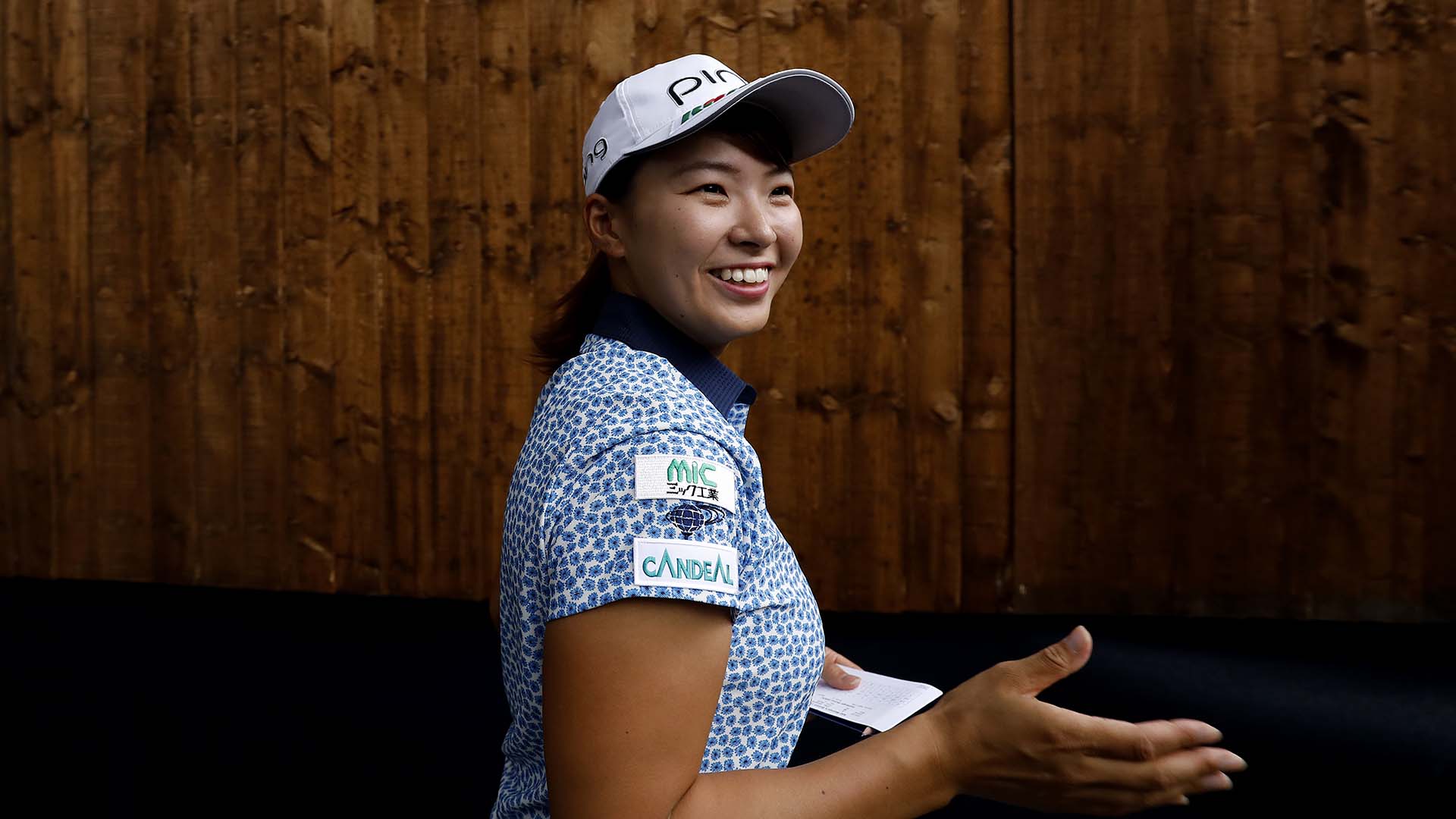 WOBURN, England – With her 10,000-watt smile and an electric personality and game to go with it, Japan’s Hinako Shibuno didn’t need a translator to connect with the mostly British galleries that turned out to watch all the English players on the leaderboard Saturday at the AIG Women’s British Open.

She stole the show.

The Japanese media called her “The Smiling Cinderella” and “The Smiling Angel” after she came out of nowhere as a rookie to win the JLPGA’s first major championship earlier this year. Now, Shibuno is following the same script on one of the grandest stages in the women’s game, introducing her charm to an international audience for the first time. She’s just 20 year old, playing in her first LPGA major, in her first competition outside Japan.

“We didn’t really know who she was when she won the Salonpas Cup,” said Takumi Zaoya, husband to Japanese icon Ai Miyazato, who helped translate for Shibuno after her round. “She just had this bubbly personality, and now she’s part of this group of young 20-year-old players that they’re calling the golden age of Japanese golf.”

With a blistering finish Saturday, Shibuno surged to the top of the leaderboard at Woburn Golf Club, shooting a 5-under 67 to get to 14 under. She’s trying to become just the second Japanese player, male or female, to win a major championship. Chako Higuchi won the LPGA Championship in 1977.

How unlikely is Shibuno’s emergence?

“Last year, I passed the professional golfer's test in Japan,” Shibuno said. “At that point, I didn't even know if I could play on tour. So, I really can't understand why I'm performing at this level, but I think my coach is really helping me.”

Shibuno was six shots back making the turn, but she shot 30 on the back nine, taking command with birdies at four of the final five holes.

“I came in wanting to make the cut,” Shibuno said. “So, right now, I feel like I’m doing something very incredible.”

Shibuno couldn’t have looked more comfortable being on a world stage for the first time, though her setup over the ball looks extremely uncomfortable. Her left arm appears to awkwardly hyperextended, thanks to “double-jointed” elbows. It isn’t the only unusual part of the show she is putting on. Her manager, Hiroshi Shigematsu, followed her around dressed in a kimono, wearing a bright blue wig and carrying a toy samurai sword.

Shibuno giggled when reporters asked about her manager’s colorful costumes.

“Difficult to comment, but a little embarrassing,” Shibuno giggled. “I try not to look.”

Shigematsu said he has more sartorial splendor planned for Sunday, but he wouldn’t reveal exactly what.


Shibuno took her first lead with a birdie at the 17th, but she didn’t show any nerves walking to the 18th tee. She stopped along the ropes, signed a golf glove for a young boy and patted him atop the head. Then she striped her final drive and stuck her last approach shot to 5 feet to set up a closing birdie.

She’s enjoying this rocket ride to the top of the game this year. She’s already No. 49 in the Rolex Women’s World Rankings and looking as if she’s going to make another leap this week.

“Eat, take a shower, eat some sweets, watch YouTube and sleep,” she said.

Japan awaits to see if it’s a winning game plan. 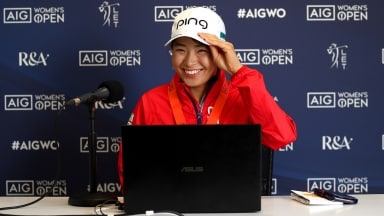 Hinako Shibuno without fans in her title defense at the AIG Women’s Open this week? It may be like watching a fireworks’ show in fog.