Hold the Rookie of the Year talk for Langley, Henley 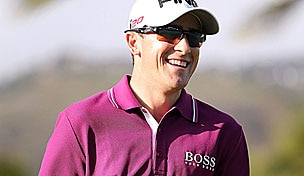 There has been a lot of Rookie of the Year talk following Scott Langley’s opening 62 and Russell Henley’s 63 at the Sony Open, as if June is the time for debate about pennant races; But as good as the newcomers seem to be, the deck may be stacked against them in 2013.

According to PGA Tour regulations, a player is considered a rookie when he “plays 10 or more events as a member or finishes in the top 125 as a member on the official PGA Tour money list.”

Thanks to their world ranking – Hanson (20th), Colsaerts (36th), Kaymer (28th) and Fisher (94th) – those pseudo rookies will enjoy extra starts that the other members of the rookie class likely will not, including the year’s first major in April at Augusta National (top 50), next month’s WGC-Accenture Match Play Championship (top 64) and the WGC-Cadillac Championship (top 50).

Langley and Henley may have the look of potential Rookie of the Year candidates, but the true newcomers this year are playing with a built-in handicap.