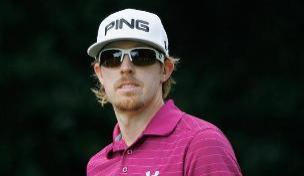 Getty Images
ATLANTA, GA - SEPTEMBER 25: Hunter Mahan walks off the fourth tee during the final round of the TOUR Championship at East Lake Golf Club on September 25, 2011 in Atlanta, Georgia. (Photo by Kevin C. Cox/Getty Images)  -

Hunter Mahan won the Shell Houston Open last week and heads to Augusta National as the only 2-time winner on the 2012 PGA TOUR as he also won the WGC-Accenture Match Play Championship back in February. Mahan credited his mental coach when he won in Houston last weekend and he said that he has been focused on trying to stay in the present and enjoy the moment. That philosophy relates to both golf and life in general and he tells himself to enjoy the moment even when he is in contention in a golf tournament on Sunday afternoon.  He wants to believe that no matter what happens he will be able to persevere through the pressure.

At Augusta National he has either finished in the top 10 or missed the cut in his last four starts. He does not know why he has performed the way he has because he is a good ball striker and that is what you have to be when you want to contend in The Masters. Right now, he is hitting it well and his short game is strong as well. He has a lot more confidence going into The Masters on Thursday because of the work that he has put into his game.

Erik then reminded how Hunter did not mention Morning Drive in his News Conferences as a part of their wager in Miami a few weeks ago. Hunter claimed that he did not recall such a wager being made and said that he would give Morning Drive some more love in the future because he enjoys the show and likes Erik and Gary. He also hinted in good humor that Erik’s win may have been because of some cheating.

Sean Foley is his swing coach and Hunter loves how Sean has been able to help him improve from year and year and Hunter is also happy to see how much Sean has helped Tiger Woods and Justin Rose with their games. Sean has a great work ethic and has done a great deal to help a lot of people and the recent success of his students has provided him some much deserved positive press coverage.