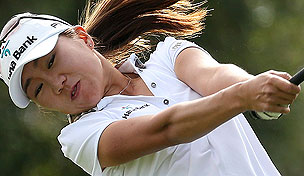 RANCHO MIRAGE, Calif. – I.K. Kim had yet another unlucky finish at the Kraft Nabisco Championship.

A year after Kim missed a short putt that could have won her this championship, her return Thursday ended with frustration.

With Kim over a putt at No. 9, her final hole of the first round, her ball turned a half-rotation. She immediately called over playing partner Stacy Lewis. After conferring with Lewis, Kim reached down and rotated her ball back to its original position.

Both players later confirmed that Kim penalized herself a stroke. That gave her a closing double-bogey 7 and a 3-over 75.

“The ball moved,” Kim said, marching swiftly to the clubhouse.

Under a change in the Rules of Golf two years ago, players are no longer penalized when their ball moves after address as long as “it is known, or virtually certain, that he [or she] did not cause the ball to move.”