Park cruises to win in final round of Kraft Nabisco 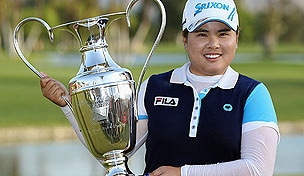 A day after Lizette Salas revealed that boxing champ Oscar De La Hoya was rooting for Salas to go for the “knockout” at the Kraft Nabisco, it was Park who landed the big blow early.

Park pretty much won by TKO on the first hole of the final round Sunday at the Mission Hills’ Dinah Shore Course.

Three shots ahead of Salas at day’s start, with nobody else closer than six, Park buried a 20-foot birdie putt at the opening hole. With Salas cold-topping her approach to No. 1, advancing it just 15 yards in the rough on the way to making double bogey, Park was on the better side of a staggering three-shot swing. With another birdie at the second hole, Park was off and running with a seven-shot lead in a finish that offered little drama.

Closing with a 3-under-par 69, Park claimed her second major championship title, ultimately winning by four shots over fellow South Korean So Yeon Ryu, who tried to make it interesting with a closing 65. Park finished at 15-under 273 overall.

“She looks like she played another golf course,” Ryu said. “This golf course is really hard.”

Park broke through to win her first major at the U.S. Women’s Open at Interlachen in 2008.

This victory shouldn’t surprise. Park and Stacy Lewis are the two hottest players in the women’s game. Park won the LPGA money title and the Vare Trophy for low scoring average last year. Lewis was the Rolex Player of the Year. The victory is Park’s second already this year, equaling Lewis’ fast start. The two have won four of the first six LPGA events this season.

Lewis, who tied for 32nd on Sunday, will remain the Rolex world No. 1 when the newest women’s rankings are released on Monday. Park will climb to No. 2 after starting the week at No. 4.

“I think Inbee Park and Stacy Lewis might be the next big battle this year,” Hall of Famer Judy Rankin said.

Park seems to be in contention every time she tees it up now. She has won four of her last 16 LPGA starts dating back to last summer. She had a remarkable run last year where she finished first or second eight times over 14 events. She finished outside the top 10 just twice in that five-month span.

“I feel a lot of confidence with my swing and with my putting,” Park said. “Everything has been going the right way this season, and it feels good.”

Not a power player, Park wasn’t sure of her chances coming into the Kraft Nabisco, thinking she hit the ball too low for the Dinah Shore course’s quick surfaces. Park, though, showed masterful control through four rounds. Nobody hit more greens in regulation all week (57/72). Her ball striking has improved dramatically since she asked her fiancé, Gi Hyeob Nam, to coach her last year.

Really, though, Park’s putting is her greatest weapon.

Park, wielding her Odyssey Sabertooth putter like some magic wand, may be the best putter on tour. She has led the LPGA in putts per greens in regulation three of the last five years. Twice, she has finished first in putts per GIR and total putts.

From the start Sunday, Park’s putter didn’t let her down. She rolled in that 20-footer at the first and another 15-footer at the second. She buried a couple 30 footers for birdies coming home with just one hiccup, a short miss at the 17th that did not really matter.

“I’ve seen Inbee do this before,” Lewis said. “When she’s rolling it, you can’t beat her.”

Park was rolling in birdies that landed like knockout punches Sunday at Mission Hills.