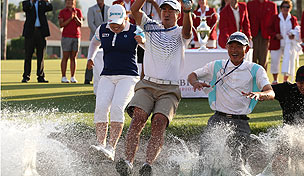 RANCHO MIRAGE, Calif. – Inbee Park took an empty water bottle with her into Poppie’s Pond during the traditional winner’s leap Sunday at the Kraft Nabisco Championship.

Park, 24, filled the bottle with water and capped it. She plans to give it to her father, Gun Gyu Park, when she sees him in two weeks in Hawaii at the Lotte Championship. Actually, she plans to dump the water over her father’s head so he can share in the Poppie’s Pond celebration he missed Sunday.

“That’s what he wanted,” Park said.

Park said her father was packed and ready to fly from South Korea to the Kraft Nabisco to see Sunday's final round, but she stopped him and told him to stay in South Korea. She thought worrying about his journey would hurt her focus.

“He packed his bags and booked a ticket and everything, and he was on his way,” Park said. “I called him and said, `Just don't come.’  He was very mad because he really wanted to come. Really, it was tough stopping him, but he actually listened to me, and I'm glad that I won today.”

Park had one of the largest contingents in Poppie’s Pond history with her when she leaped. She had a party of eight in her leap. She had her caddie, swing coach, trainer and some friends leap with her.