Park, Lewis, Tseng to battle for No. 1 in Hawaii 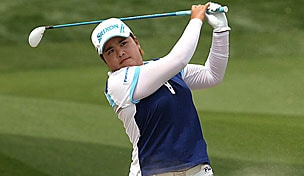 Getty Images
CROMWELL, CT - JUNE 26: Justin Rose of England hits a fairway shot on the seventh hole during the third round of the Travelers Championship held at TPC River Highlands on June 26, 2010 in Cromwell, Connecticut. (Photo by Michael Cohen/Getty Images)  -

The Rolex No. 1 world ranking is up for grabs in Wednesday’s start of the LPGA’s Lotte Championship in Hawaii.

New No. 1 Inbee Park faces challenges from No. 2 Stacy Lewis and No. 3 Yani Tseng. Nobody else, though, can leave the event with the No. 1 ranking, according to LPGA projections.

Lewis held the top spot for four weeks after winning the RR Donnelley Founders Cup, but Park took it away this week, eight days after Park won the Kraft Nabisco Championship. Park’s world-ranking average improved after an off week because her divisor changed, with an event dropping off the rolling two-year rankings window.

Video: What to watch for at the LPGA Lotte Championship

Here are this week’s scenarios:

• She wins (regardless what Park or anyone else does).

• Lewis finishes solo seventh or worse and Tseng does not win. In this scenario, it doesn’t matter how Park finishes, even if she misses the cut.

• She finishes solo third while Lewis finishes third or worse.

• She finishes solo fourth while Lewis finishes third or worse.

• She finishes solo fifth through 10th while Lewis finishes fourth or worse.

• She finishes solo 11th through 23rd while Lewis finishes fifth or worse.

• She finishes solo 24th through 58th while Lewis finishes sixth or worse.