The Hot Dog King of Chicago holds court in Hawaii 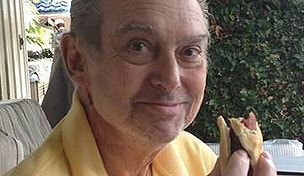 HONOLULU – The man runs a hand through his thinning, silvery hair, looks knowingly at a few friends and methodically says, “So there’s this lawyer who’s out to dinner with his wife when this voluptuous blonde walks in…”

Just then, a stranger walks up to his green gated backyard just 150 yards off Waialae Country Club’s first tee and to the right of its fairway, and interrupts the joke.

The man stops for a moment and without reservation yells, “Come on in! Have a hot dog!”

He then leans back in his chair and addresses the semicircle of friends eagerly awaiting a punchline they’ve been hearing for years. When it comes, they laugh. Not polite chuckles, but loud, forceful belly laughs, as if the man just told them the funniest thing ever. And maybe, just maybe, he did.

His name is Ira Helfer, but people around here know him as the Hot Dog King of Chicago.

This is what they do during the Sony Open. They walk in, they grab a hot dog, they listen to some jokes, they hang out with the Hot Dog King. They’ve been coming every year since 1985, when Helfer moved here with his family and decided to open his backyard to friends and potential friends alike.

He’s originally from Chicago – sorry, “west side of Chicago,” he reminds people – where hot dogs are less a meal than a way of life. He’ll go through close to 1,000 of them this week, each one individually wrapped in aluminum foil, served with mustard and your choice of pickles, peppers and other complements.

Even at the mention, Helfer’s eyes grow cold and his brow furrows. He may suffer fools, but not fools who request ketchup on their hot dogs.

“If they do,” says longtime friend Paul Shinkawa, “they don’t get a hot dog. He’s like the Soup Nazi.”

Everyone else is welcome, though. There are those who have heard all the jokes and those listening for the first time. There are those he greets with a friendly hello and those who receive acknowledgment in their native Japanese, his fluency the result of spending years in the import-export business in Asia.

The hot dogs are Vienna beef. They are real – and they are spectacular. Grilled on the outside, juicy on the inside. And they’re free, too, since the Hot Dog King refuses to take a nickel from anyone.

Even players have been known to meander into his backyard. Mark O’Meara used to partake in Helfer’s hot dogs. So did “some no-name” with whom he won the tournament’s pro-am years ago.

But those are hardly the most esteemed guests. A few years ago, Helfer was playing Waialae when he received some interesting news.

“When I checked in, the starter said Bill Clinton and the governor were going to be here,” he tells for what must be at least the 1,000th time. “They had gone off the back. I waved at them; I knew the governor. He pulls the cart around, gets out and introduces me to the president. What the hell do you say to a president? ‘Good afternoon, sir. Playing nine?’ He said, ‘No, playing 18.’

“Now what do you say? ‘Well, if that’s the case, why don’t you stop at my house at the turn and grab a hot dog?’ The governor turns to him and says, ‘This guy’s got the best hot dogs west of the Mississippi.’ The president says, ‘Then we’ll stop there.’

And did the president have a hot dog?

The belly laughs continue around the semicircle, large men choking down beef and bun with contagious smiles spread across their faces.

But there were almost no laughs this year. No smiles, no hot dogs and – most distressingly – no Hot Dog King.

He was in the hospital until Thursday morning, only getting out just prior to the opening round.

“I don’t know why I got sick,” Helfer, 68, says while pulling a bandage and gauze from his right hand. “My kids were here and Monday evening after dinner, I couldn’t stand up. My youngest son is like 350 pounds and he couldn’t even help me up. I’ve never been like that, so we called an ambulance and went to the hospital. But they didn’t know what the hell was wrong.”

So he was discharged from the hospital?

Hundreds of friends will flood his backyard this week, each one enjoying a hot dog, most of them going back for seconds or thirds or more. The only thing missing from the party is ketchup, just the way Helfer likes it.

Even if you’re not a friend – not yet, at least – feel free to walk up to the green gate, where the Hot Dog King will let you in with a yell.

When you do, ask him the one about the lawyer, his wife and the voluptuous blonde. Then sit back, take a bite of your hot dog and get ready to laugh.