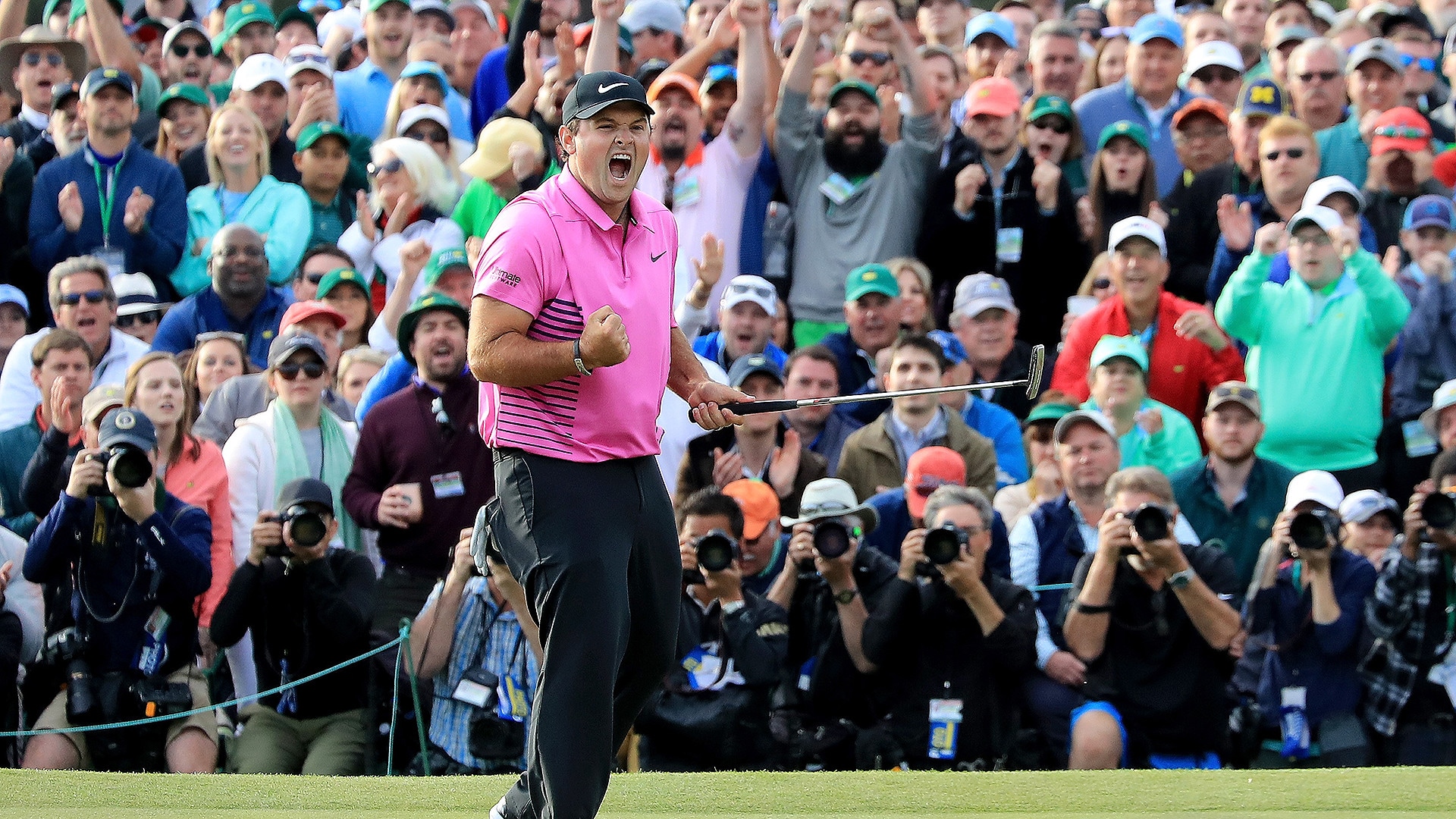 AUGUSTA, Ga. – Of all the potential scenarios at this 82nd Masters, it wasn’t difficult to discern the patrons’ preference for a winner.

A Rory McIlroy Grand Slam? They cheered lustily on the first tee, but that dream soon fizzled.

A historic Jordan Spieth comeback? They stirred the pines, but he bogeyed the 72nd hole.

A feel-good Rickie Fowler win? They implored him to finish, but ultimately he fell one stroke shy.

And so the only one left to cheer late Sunday was Patrick Nathaniel Reed, who has seamlessly played the role of both hero and villain during his turbulent career.

Grievances, both perceived and otherwise, have fueled the 27-year-old’s rise to stardom, and so the tepid response to his one-stroke Masters victory was a fitting soundtrack for this complicated character.

“Patrick is a bulldog – he’s used to being the underdog,” said his swing coach, Kevin Kirk. “It doesn’t bother him that people like him or don't like him. He thinks, I’m going to win this tournament whether you like it or not.”

During a frenetic final round that featured a trio of star-studded challengers and raucous cheers for seemingly everyone but him, Reed never lost his cool, or the lead, during a gritty 71. All day he turned back McIlroy (74) and Spieth (64) and Fowler (67) to capture his first major – a title that long felt like his destiny.

“To win your first major is never going to be easy,” he said, after slipping into his size-44 green jacket, “and it definitely wasn’t easy today. It’s a way of God saying, ‘Let’s see if you have it. Everyone knows you have it physically with the talent. But do you have it mentally?’”

And that, of course, has always been the question with Reed.

Carrying a chip the size of Texas, Reed’s abrasive personality has rubbed others the wrong way for the past decade.

Alienating his teammates at Georgia with his brash attitude and me-first approach (along with other unconfirmed misdeeds), he lasted only a semester with the Bulldogs, his dismissal expedited by a 2008 arrest for underage possession of alcohol and possession of a fraudulent ID.

In need of guidance, Reed found a willing mentor in Josh Gregory. Then the coach at Augusta St., Gregory convinced the brooding 20-year-old to eschew another big program for a Division II commuter school with a $30,000 operating budget. “I told him, ‘Let’s be the big fish in a small pond. Come to a smaller school, play for a coach who will be very hands-on and involved in your life,’” Gregory said. “That was something I thought he needed.”

The honeymoon phase wore off quickly there, too. Reed immediately clashed with team members and was suspended for the first two events of the semester for an undisclosed violation. Pushed by the team’s other standout, Henrik Norlander, however, Reed blossomed into the blue-chipper that all of those powerhouse programs had envisioned during recruiting. He helped carry little-known Augusta State all the way to an NCAA title, toppling Oklahoma State, one of college golf’s blue bloods. Afterward, Reed rushed over to Gregory, swallowed him in a bear hug and lifted him into the air.

“Coach,” he said, weeping, “Thank you so much for believing in me when no one else did.”

That season on the brink wasn’t a fluke. The following year, still isolated from teammates, Reed once again guided Augusta State to the championship match, where they faced a familiar foe – Georgia, the school that less than two years earlier had kicked him to the curb. Worried that his star would be hell-bent on revenge, Gregory approached Reed on the practice putting green before his match with Harris English. Before he could even utter a word, Reed looked at him and snarled, “Coach, don’t say a f------ word. I’ve got this.” He earned the clinching point, going 6-0 in two NCAA appearances.

It’s revealing that, all these years later, his former teammates are still reluctant to talk about his stint at Augusta State; Gregory, who still works with Reed as his performance coach, conceded, “There were some rocky times. It wasn’t easy.” 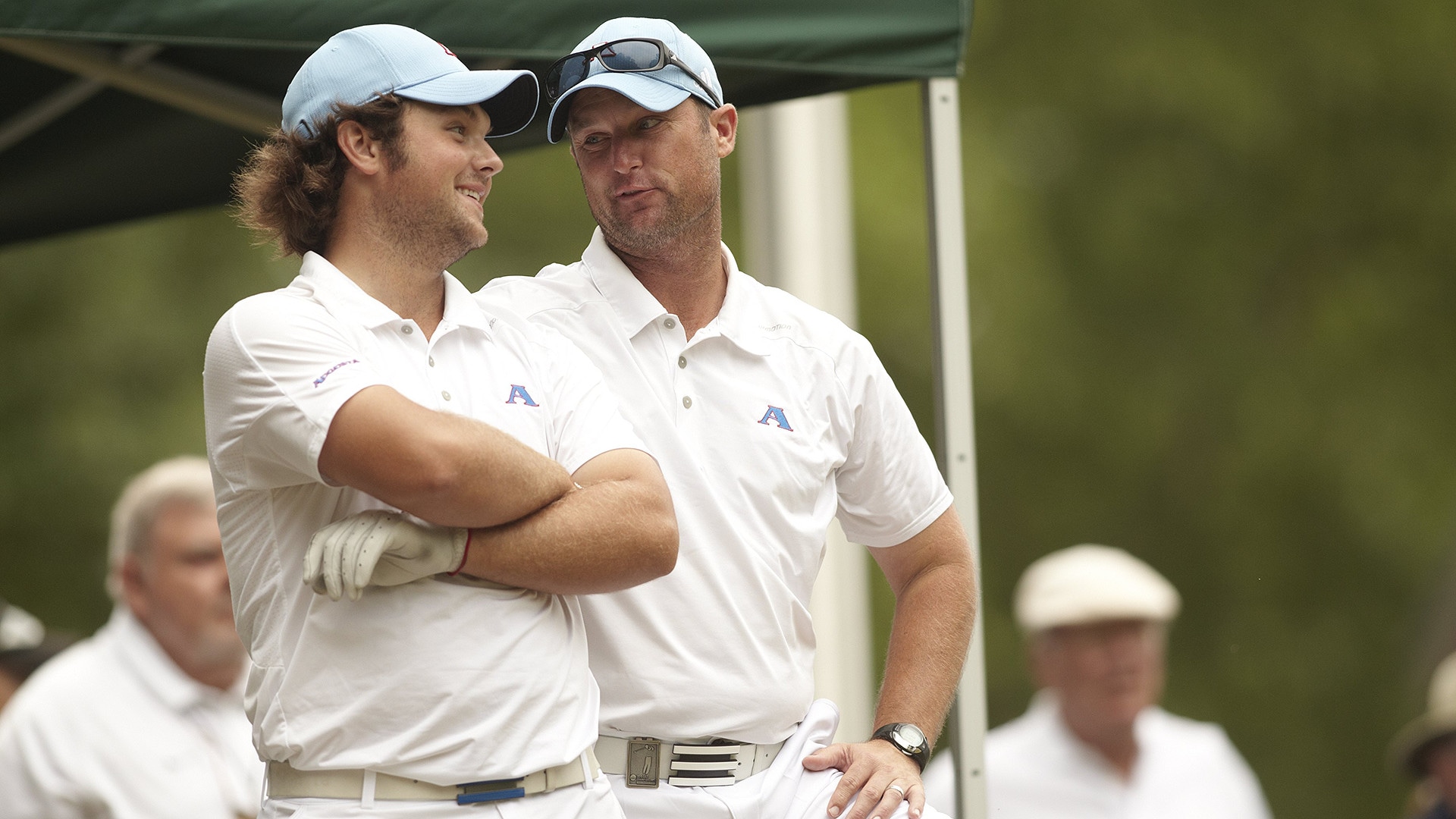 Photos: Patrick Reed through the years | Best of: Patrick and Justine Reed

The lone-wolf mentality may have created friction at the college level, but his intense single-mindedness immediately translated to the pros. After earning his 2013 Tour card, Reed took down Spieth at the Wyndham Championship for his first title. The next year, Reed outlasted the field at the World Golf Championship event at Doral, where he memorably claimed afterward that he was a top-five player in the world, when in fact he was barely top 20. Though his statement had some merit – he became only the fifth player in the past quarter-century to win four Tour events before age 25 – his delivery missed the mark. On a Tour full of straight-laced, PR-conscious automatons, Reed came off as unapologetically cocky.

To those who knew him, though, the bravado was familiar. “I genuinely have never met anybody who wants to win as bad as he does, at all costs,” said a former teammate. “I genuinely think he plays with hatred.”

But for all of Reed’s team success, both in college and at the Ryder Cup, he hasn’t been able to transfer that Captain America persona to the majors. He didn’t record a top-10 in his first 15 major appearances, and then when he finally did, during a tie for second last August at the PGA, he bogeyed the 72nd hole to clear the way for Justin Thomas. Even as recently as last month Reed lacked the ruthlessness that has defined his match-play triumphs; he bogeyed the final hole in Tampa after having just a short iron for his approach.

His struggles here at Augusta were even more puzzling. In college, he played the course at least once a year, but in the winter the fairways were softer and the greens slower. The challenge seemed immense and he was psyched out, never breaking 70 in his first 12 competitive rounds.

“It’s always been a place that should cater to his game,” Gregory said. “He has the imagination and self-belief to feel like he can pull off every shot. Augusta is tailor-made for that.”

But after his first winless season, in 2016-17, Reed spent the offseason addressing one of his only weaknesses. He’s modest off the tee, at least by brawny Tour standards, and he didn’t drive the ball particularly straight with his slinging hook. He finally incorporated a cut into his game. “And once he’s in the fairway,” Gregory said, “he’ll be pretty tough to beat.”

Reed rounded into form with three consecutive top-10s, then repeatedly put himself in the fairway at Augusta, prepared to attack. On five different occasions this week he ripped off three birdies in a row, and on Saturday he eagled both back-nine par 5s. He dominated the par 5s (13 under), opened with three rounds in the 60s and grabbed his first 54-hole lead in a major.

Three clear, one day to go, and the only true threat in his path, it seemed at the time, was McIlroy.

On Saturday night, McIlroy set the tone for the final round, telling reporters in separate interviews that Reed had the most final-round pressure. It was clever, diverting attention from his pursuit of the career Grand Slam, but those mind games were ineffective on Reed, who has proved at every level – state tournaments, NCAA finals, Monday qualifiers, Tour playoffs, Ryder Cup – to be largely impervious to pressure.

“He’s not afraid,” Gregory said. “He’s the guy who wants the ball at the end of the game. He’s the closer. He’s the quarterback with two minutes left. He relishes that moment, that 1-on-1 mentality.”

On Sunday morning, when he wasn’t watching the Disney Channel with his two young kids, Reed listened intently to the TV analysts breaking down the final group. Not one to forget a slight, he drew even more motivation when all but one picked McIlroy to win.

The first tee was another eye-opener. “His cheer was a little louder,” Reed said of McIlroy. “But that’s another thing that played into my hand. Not only did it fuel my fire a little bit, but it took the pressure off of me and added it back to him.”

Reed looked shaky to start, yanking his tee shot into the trees on No. 1 and then failing to birdie the easy, par-5 second, but he rammed home a birdie putt on No. 3 to settle his nerves.

With a four-shot lead with 10 holes to play, Reed's advantage had been trimmed to one as he lined up his second shot into the 13th hole. Then he chunked his 7-iron, and his ball barely cleared the hazard and clung to the hill. As he approached the green, the grandstand exploded – Spieth had tied the lead.

“But he didn’t let the roars and the crowd get to him,” said his caddie/brother-in-law, Kessler Karain. “If anything, I felt like he knew that he couldn’t afford to slip. That motivated him.”

Reed stuffed his approach into No. 14 to 8 feet for a go-ahead birdie, then made three consecutive pars to stand on the 18th tee with a two-shot lead.

Up ahead, Fowler capped off his round with a final birdie. “It doesn’t matter,” Karain told him. “It all comes down to us.”

Reed drove to the edge of the fairway, then left himself one of the fastest putts on the property, a 25-footer down the slope on 18. Needing two putts to win, his first attempt raced 3 feet past.

About to step in for one last pep talk, Karain deferred. “I decided, no, don’t get in the way,” he said. “Just let him do what he does.”

Reed holed the putt for the win, and the crowd politely cheered.

Added Reed's wife, Justine: “It’s everything we’ve been working hard for. A lot of people, for a long time, maybe don’t say his name as often as they should. That’s what I think. I’ve always thought he’s a great player. That’s what he did today – he showed his true colors.”

And yet, the ending felt subdued, bittersweet and awkward, as some fans (and even a green jacket’s wife) openly rooted against him. There was no Augusta State support, despite the campus sitting just four miles from the gates here at the National. And none of his family members were present, either, even though they live in Augusta, because he has been estranged from his parents for the past six years.

It’s a sad reminder of his complicated past, and the memories he can't outrace, even with a major title.

“Unfortunately, people see the brashness and the bravado and the past incidents and think that he’s a bad dude. And that’s just not the case,” Gregory said. “He’s just in his own world and very business-like. He’s not the villain that everyone makes him out to be.”

No, he is the new Masters champion – whether you like it or not.