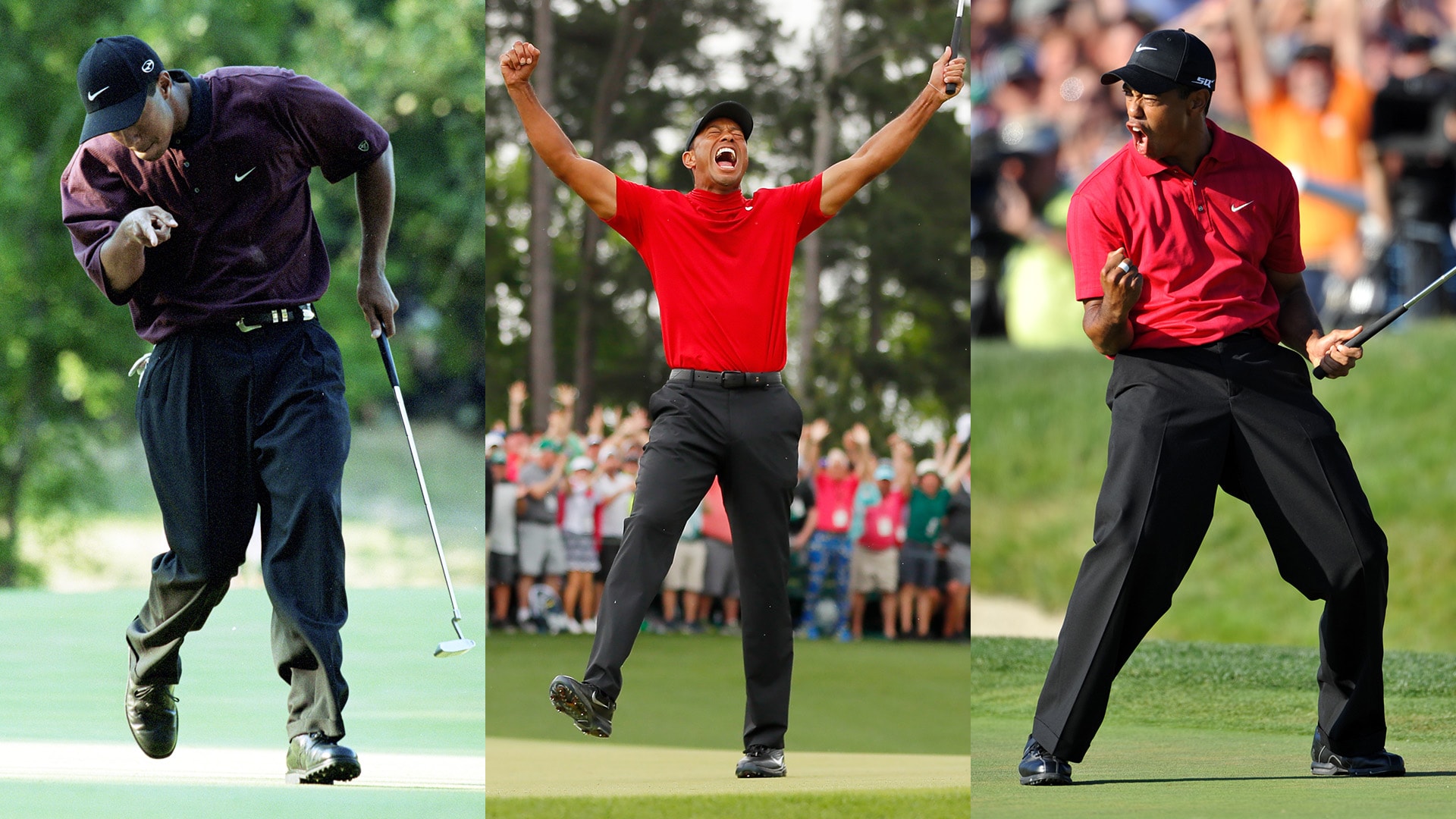 There’s no definitive way to rank Tiger Woods’ majors in order of importance. In terms of his pursuit of Jack Nicklaus’ total of 18, they all count the same. But over a 22-year span, each had a different significance in terms of history and Woods’ progression as a player.

So here’s the countdown, admittedly subjective from someone who has witnessed them all in person, with the main criteria how much each victory contributed to the awesomeness of Woods’ story.  Discuss among yourselves. 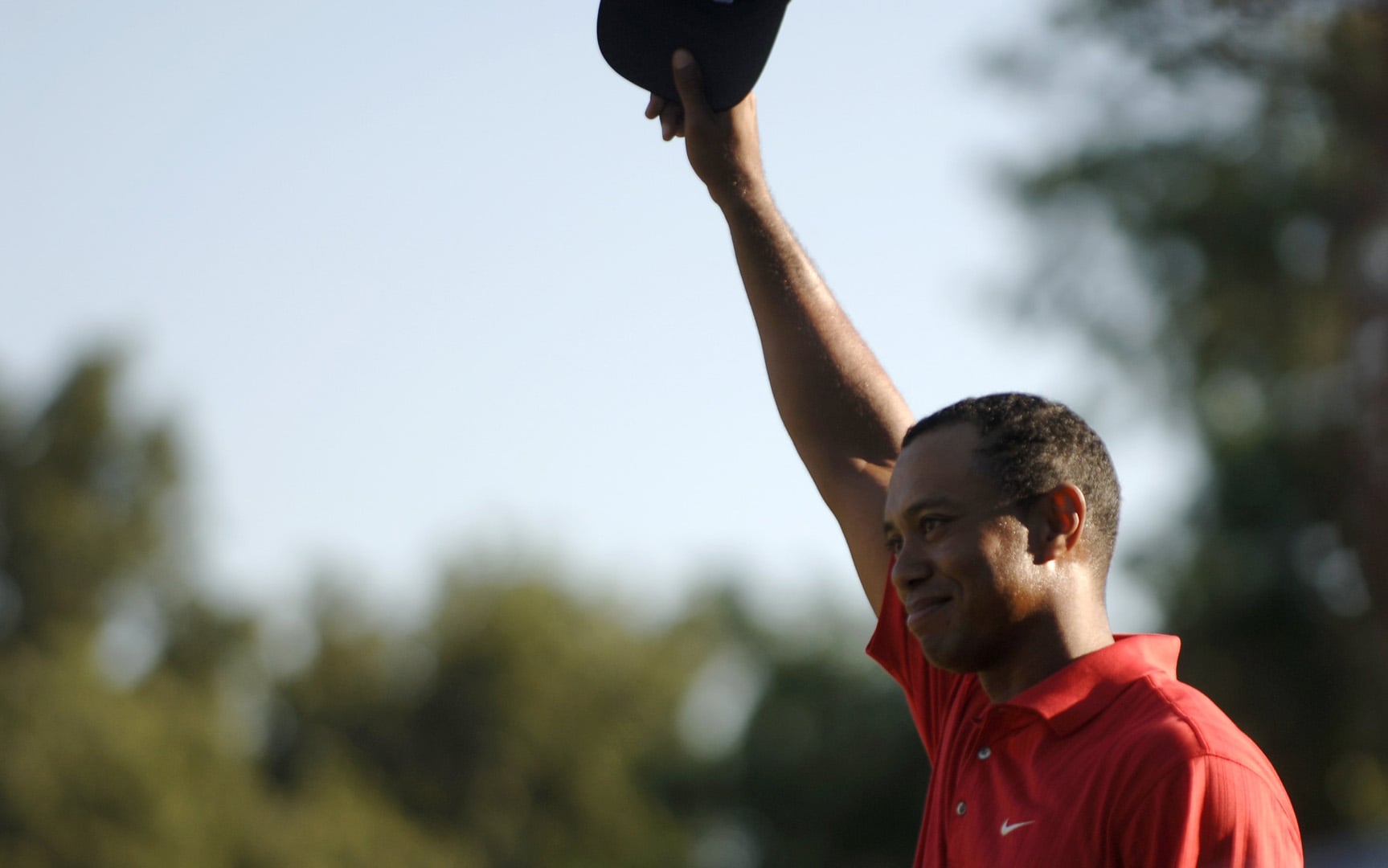 Five months before, Luke Donald had semi-chirped, “If I can compete and win majors, then surely I can be the best player in the world.” Woods, then No. 1 by a mile, filed the comment away. And after a third-round 65 at Medinah got him into the last group with Donald, Woods sent a message with a hot-putting 68 to Donald’s 74. He became the first man to win the PGA twice at the same venue. 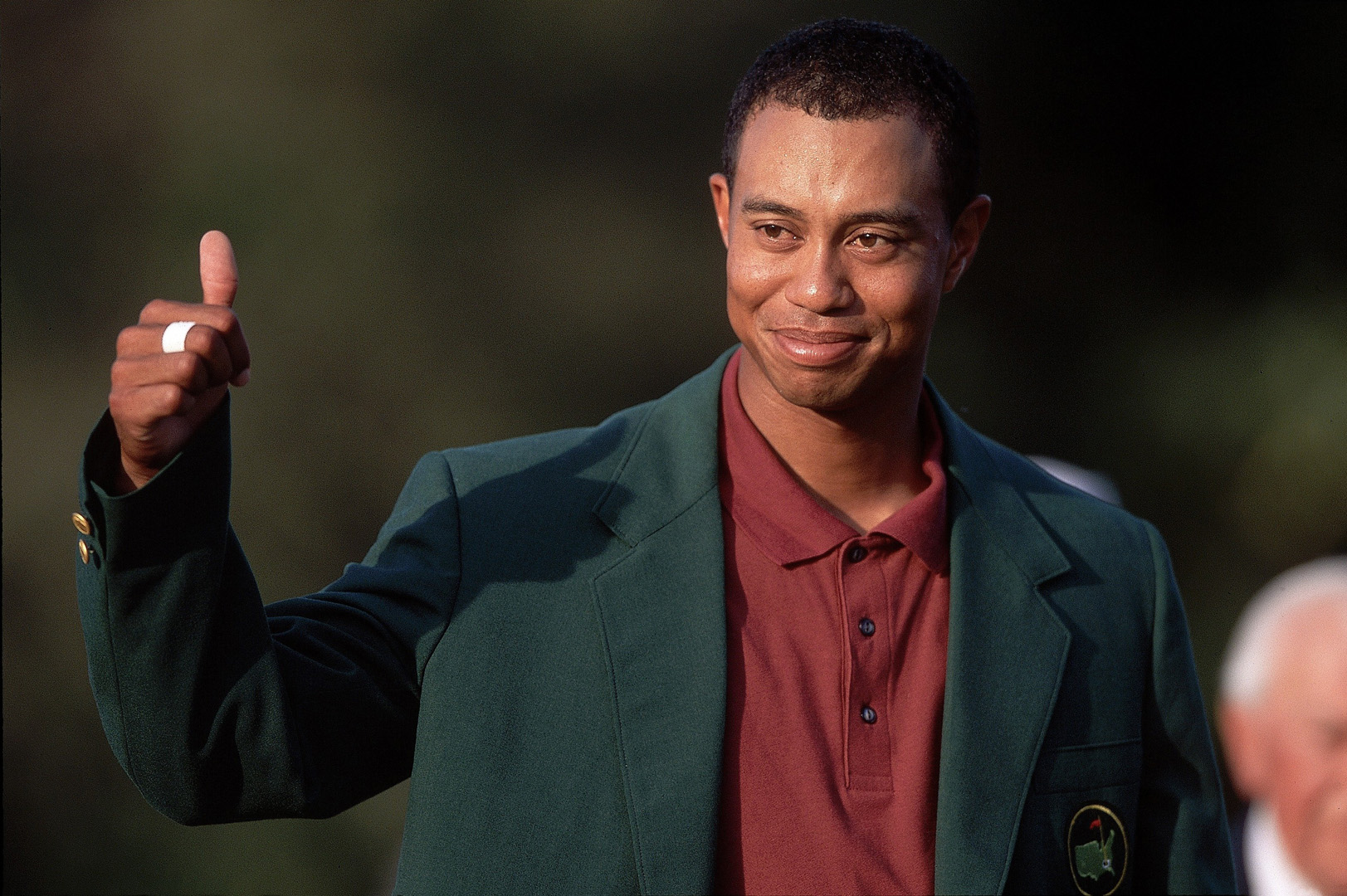 Although he joined Jack Nicklaus and Nick Faldo as the only back-to-back winners of the green jacket, Woods’ third Masters victory was relatively uneventful. A third-round 66 put him into a tie and final pairing with Retief Goosen, who bogeyed the first hole on Sunday. When Woods birdied the next two, it gave him a three-stroke lead that he held with a solid 71. 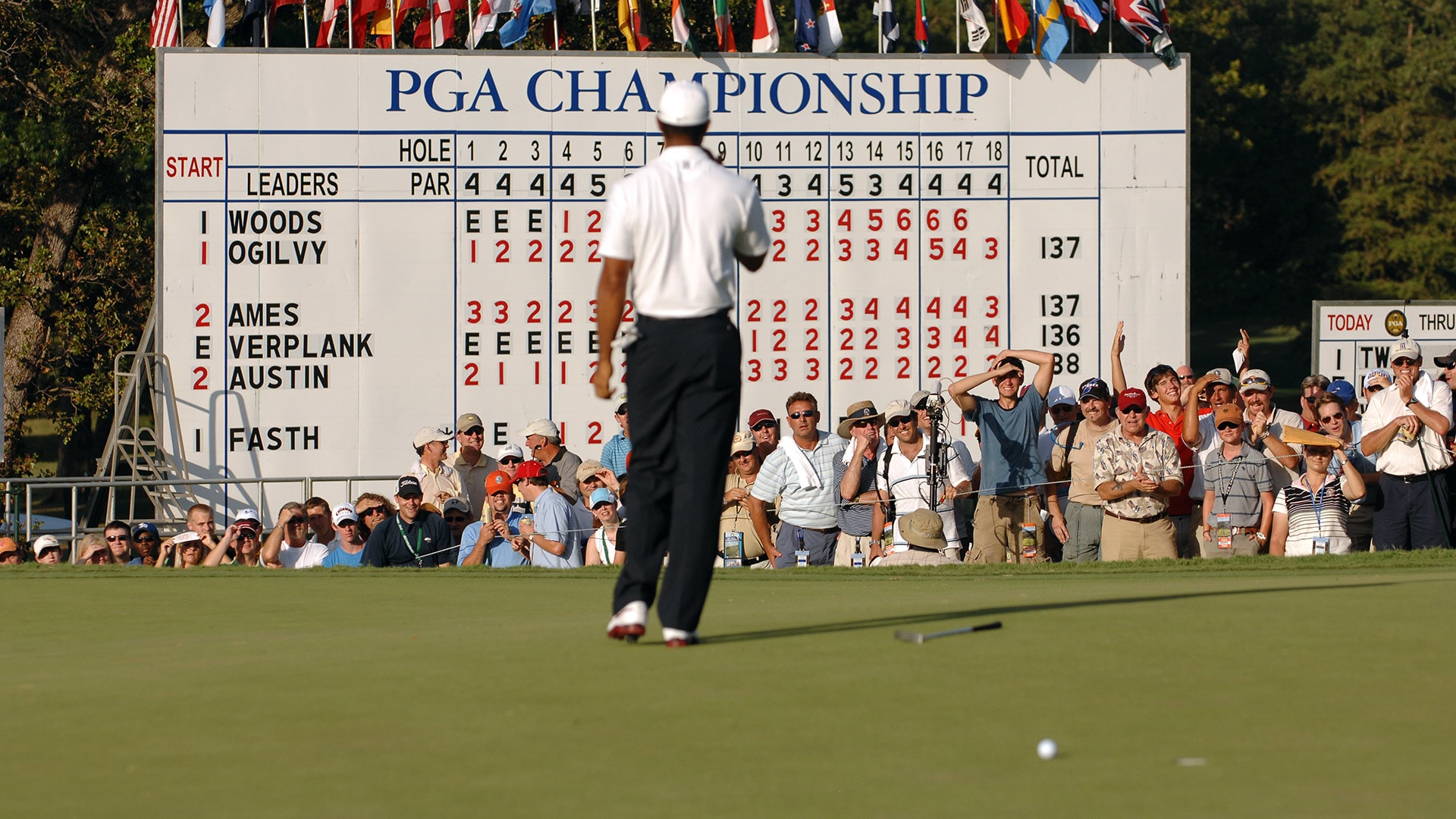 Most noteworthy for Woods’ 63 on Friday, which would have been 62 but for a 15-foot birdie putt that horseshoed out on the 18th hole. On the final day, Woody Austin birdied three holes in a row on the final nine to get within one when Woods bogeyed the 14th hole. But Tiger birdied the next to win by two. 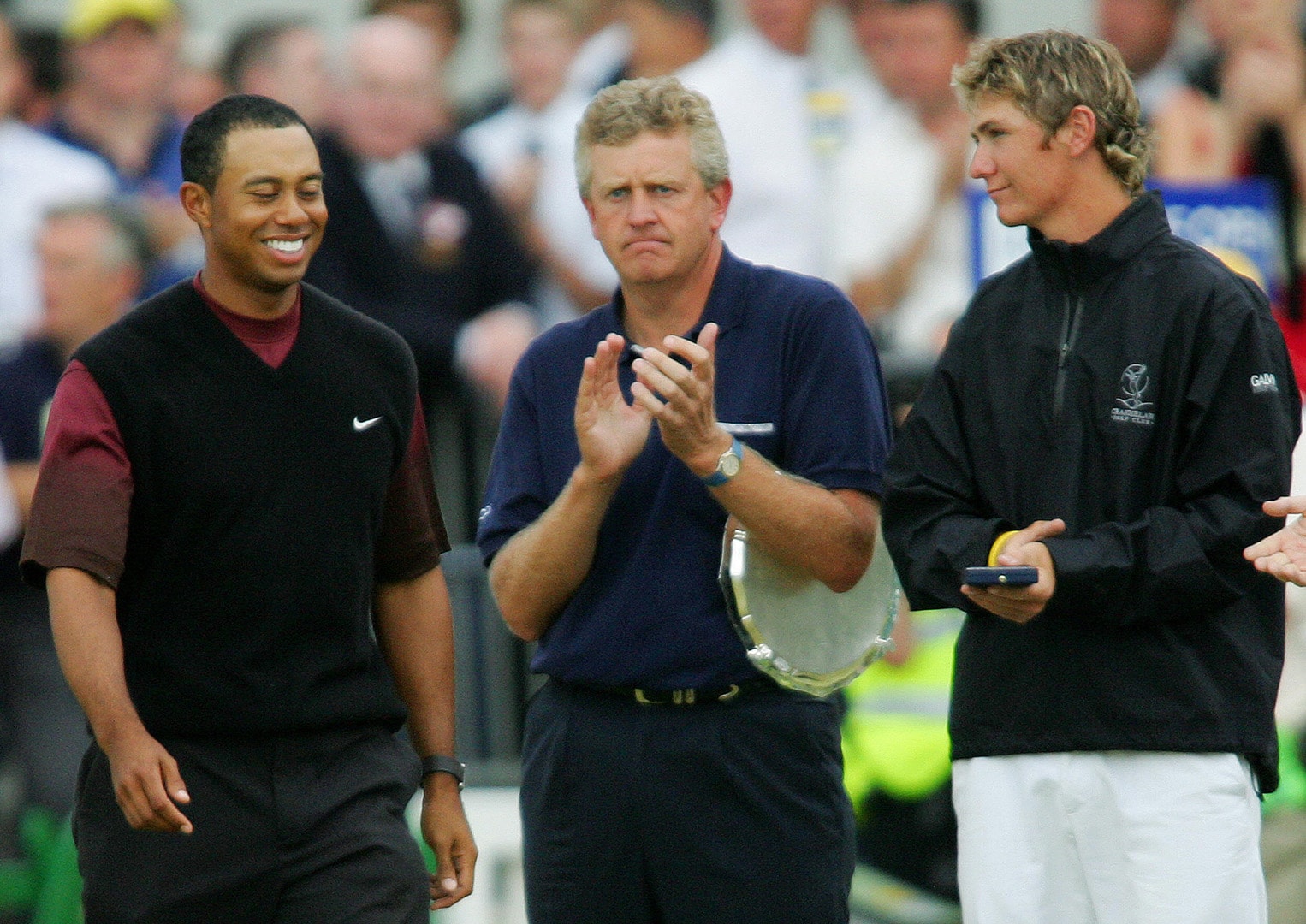 Although it’s the grandest stage for the oldest championship, Woods erased the drama with a wire-to-wire, five-stroke victory. Colin Montgomerie closed to within one with eight to play, but Woods answered with birdies on the 12th and 14th as Monty faded. For Woods, the Old Course was again the site of a completed career Grand Slam for Woods, this one his second. 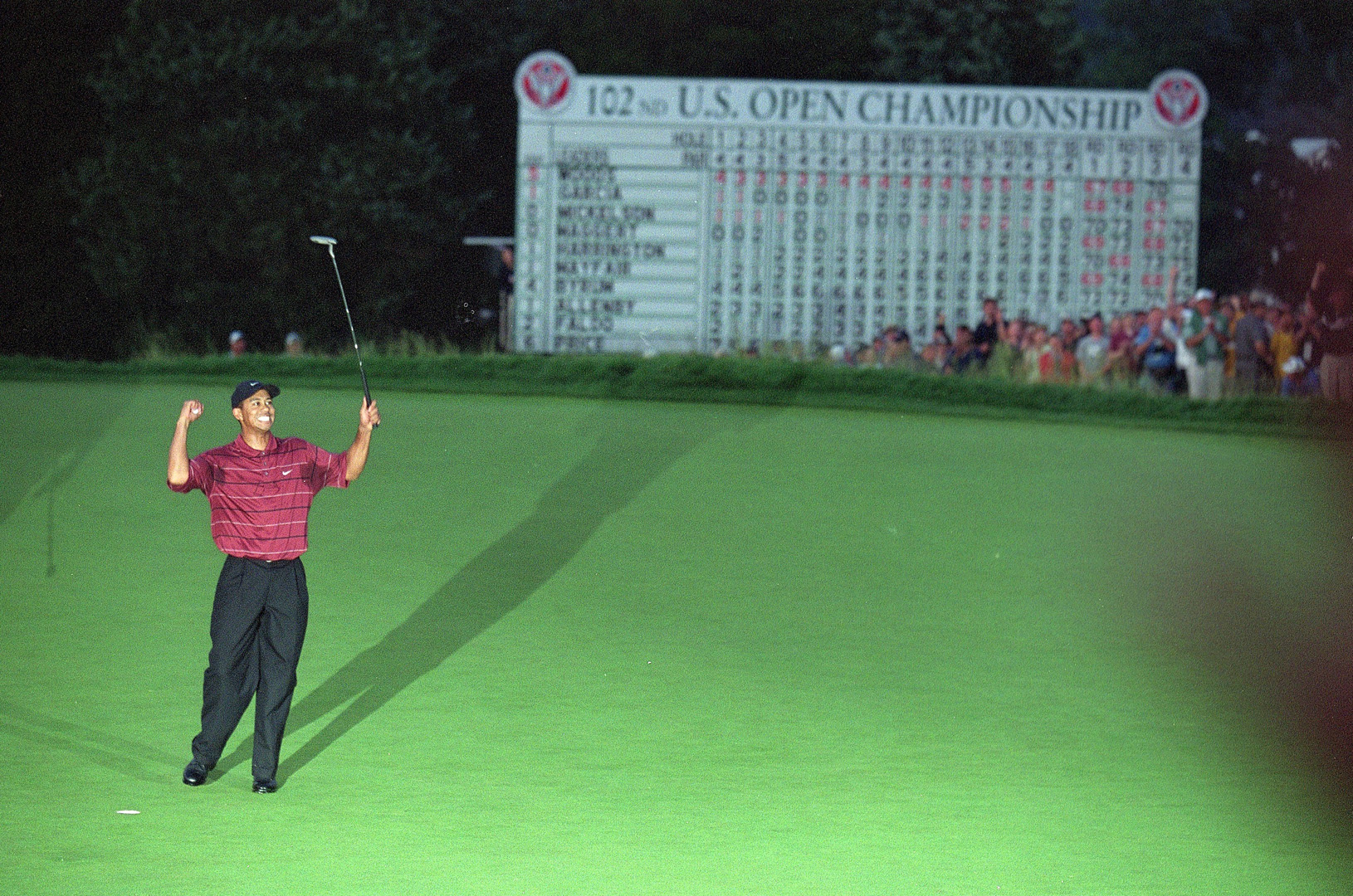 A comprehensive clinic on a very difficult test. After opening with 67, Woods went wire-to-wire, ultimately winning by three over Phil Mickelson. In the final pairing, Woods again outplayed Sergio Garcia on a Sunday, this time 72 to 74. 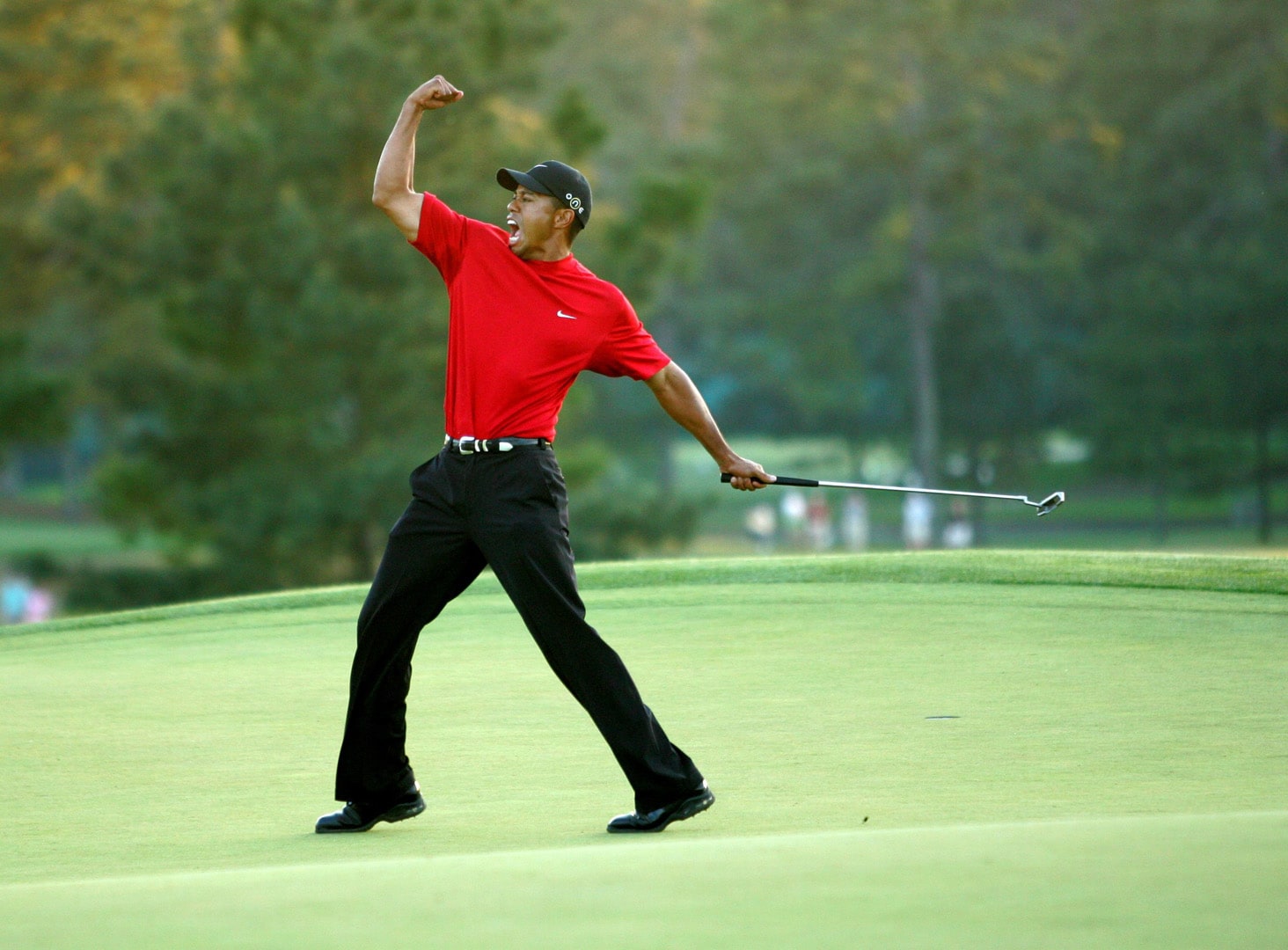 Important because it was his first major since 2002 and his first under new swing coach Hank Haney. It will always be remembered for Woods’ epic chip in on the 16th that put him two ahead of playing partner Chris DiMarco. But what’s sometimes forgotten is that Woods then blew that lead with shaky bogeys on the last two holes of regulation. But he added to his legend by somehow regrouping to hit three perfect shots in sudden death for the winning birdie on the 18th. 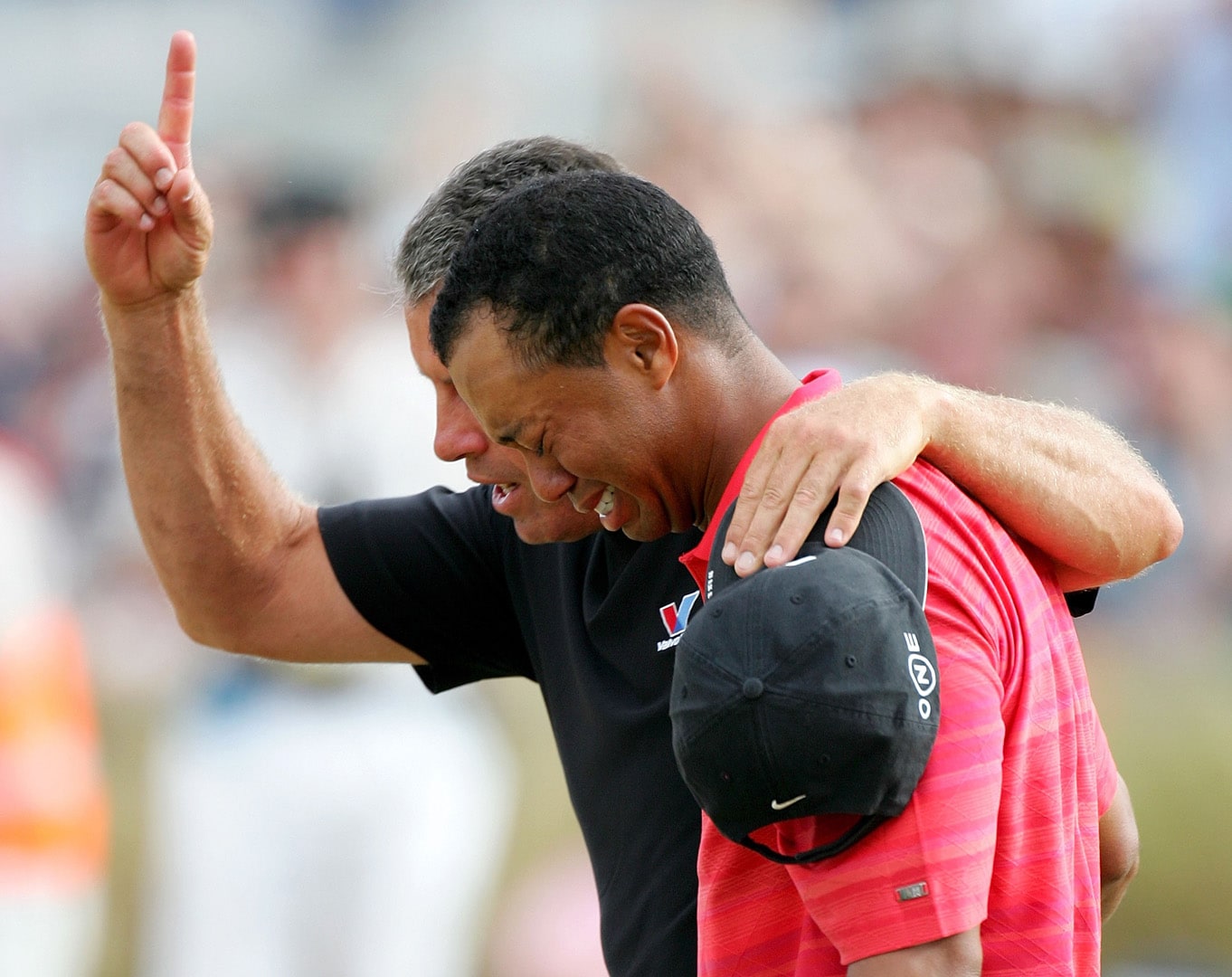 Woods’ most outwardly emotional victory, his first major since the death of his father Earl, three months earlier, bringing tears and a long hug with Steve Williams after putting out. It also stands as perhaps the most disciplined ball-striking display of his career. Woods stuck mostly to irons off the tee to avoid bunkers, leaving many mid- and even long-iron approaches. His two-stroke victory over a game Chris DiMarco (again) was a masterclass in ball control. 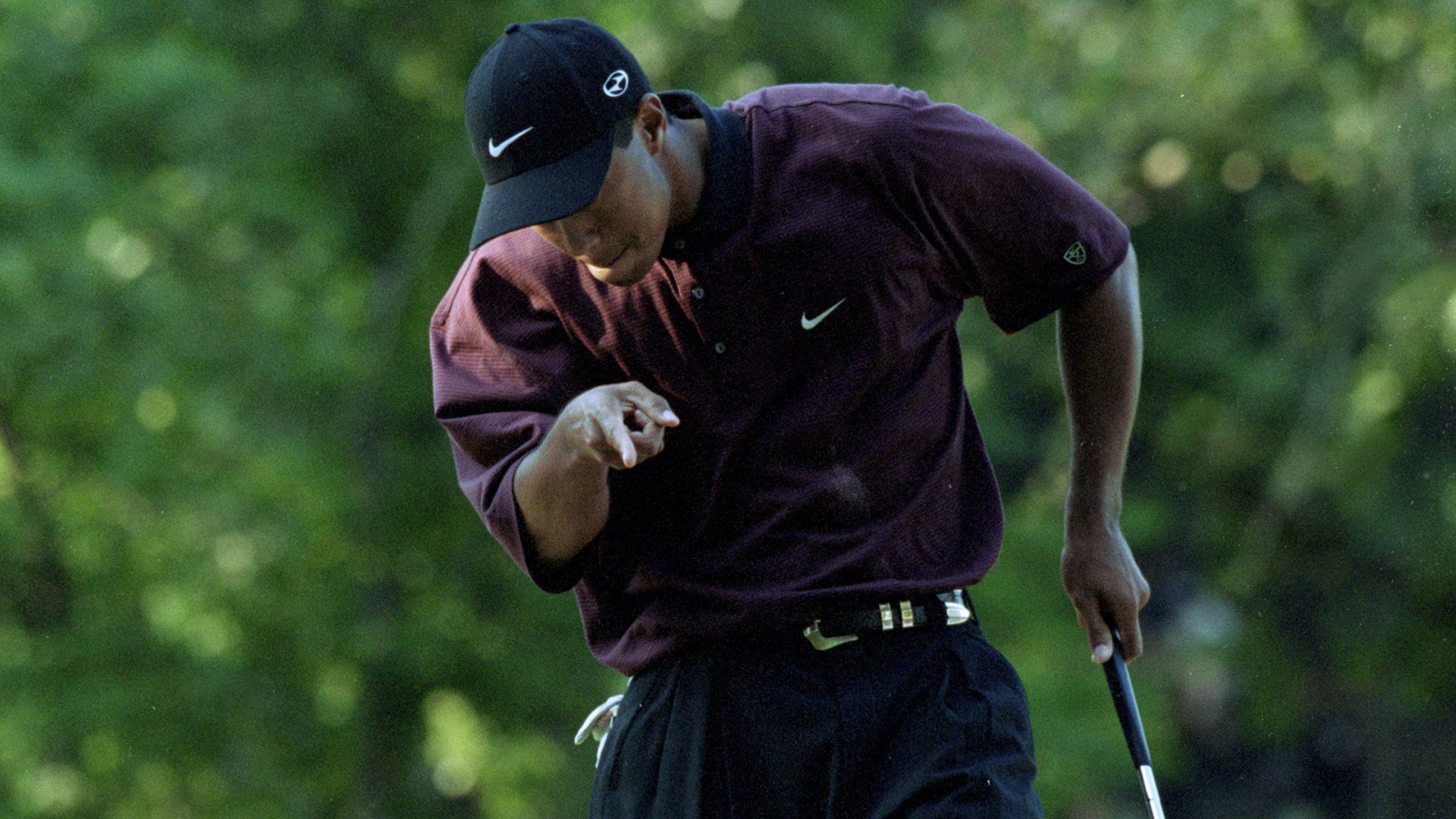 Woods somehow held off an inspired Bob May to win in a three-hole playoff. To get there, Woods had to birdie the 71st and 72nd holes, on the last making a left-edge 7-footer after May had holed an 18-footer of his own. Woods then started the playoff with his famous walk-it-in, point-the-finger birdie and held on. In Woods’ signature season, it marked the third leg of the Tiger Slam. 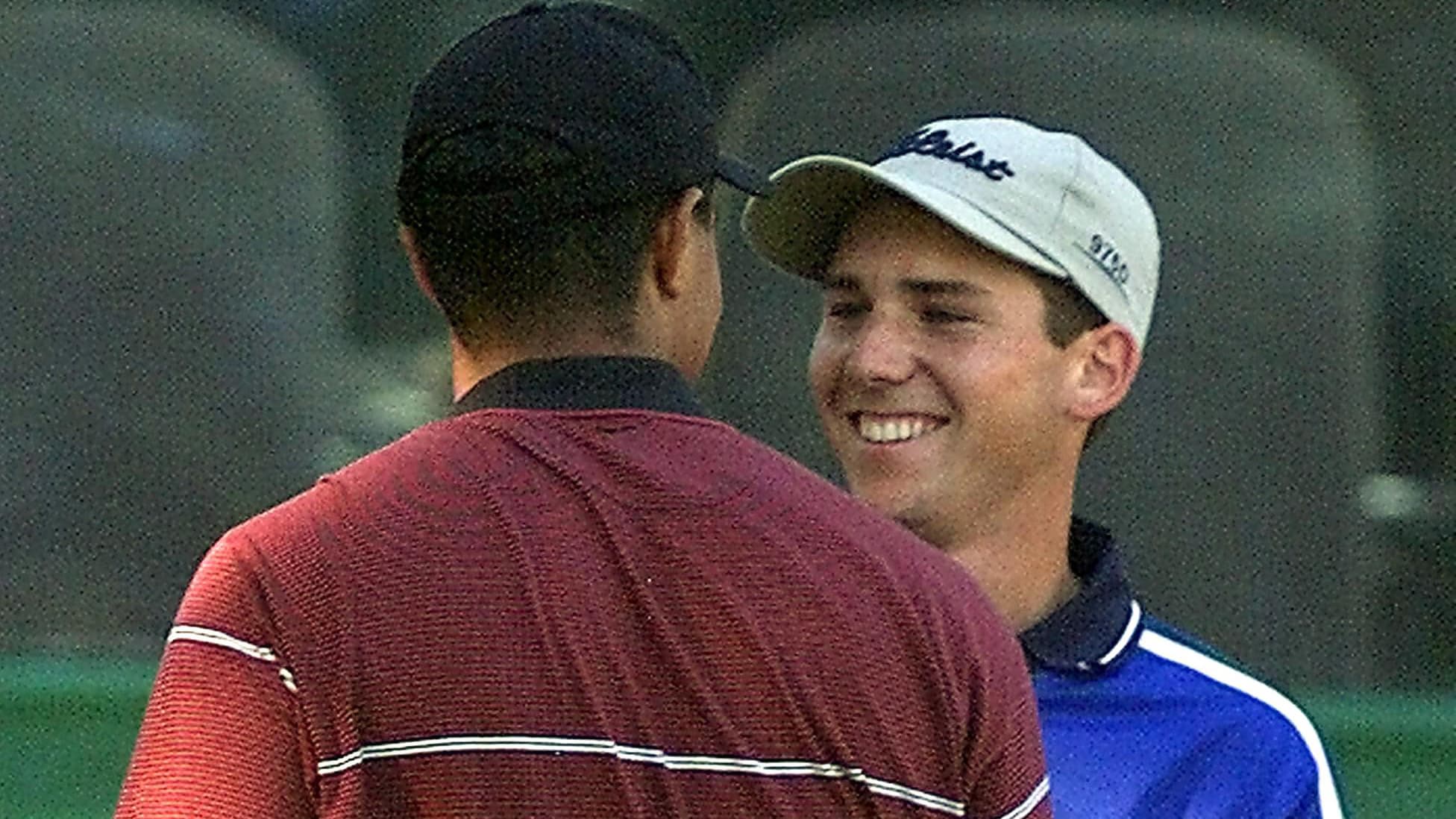 A crucial major, as it came more than two years since Woods had won his first. It also validated the swing changes he had insisted on installing with Butch Harmon and which had produced just one win in 1998. The big moment was Woods’ 8-foot par putt on the 71st, another left-edge fooler he needed to stay a stroke ahead of a surging 19-year-old Sergio Garcia. Making it, after trusting new caddie Steve Williams’ read, started Woods’ long pattern of seemingly never missing must-makes on Sundays in majors. 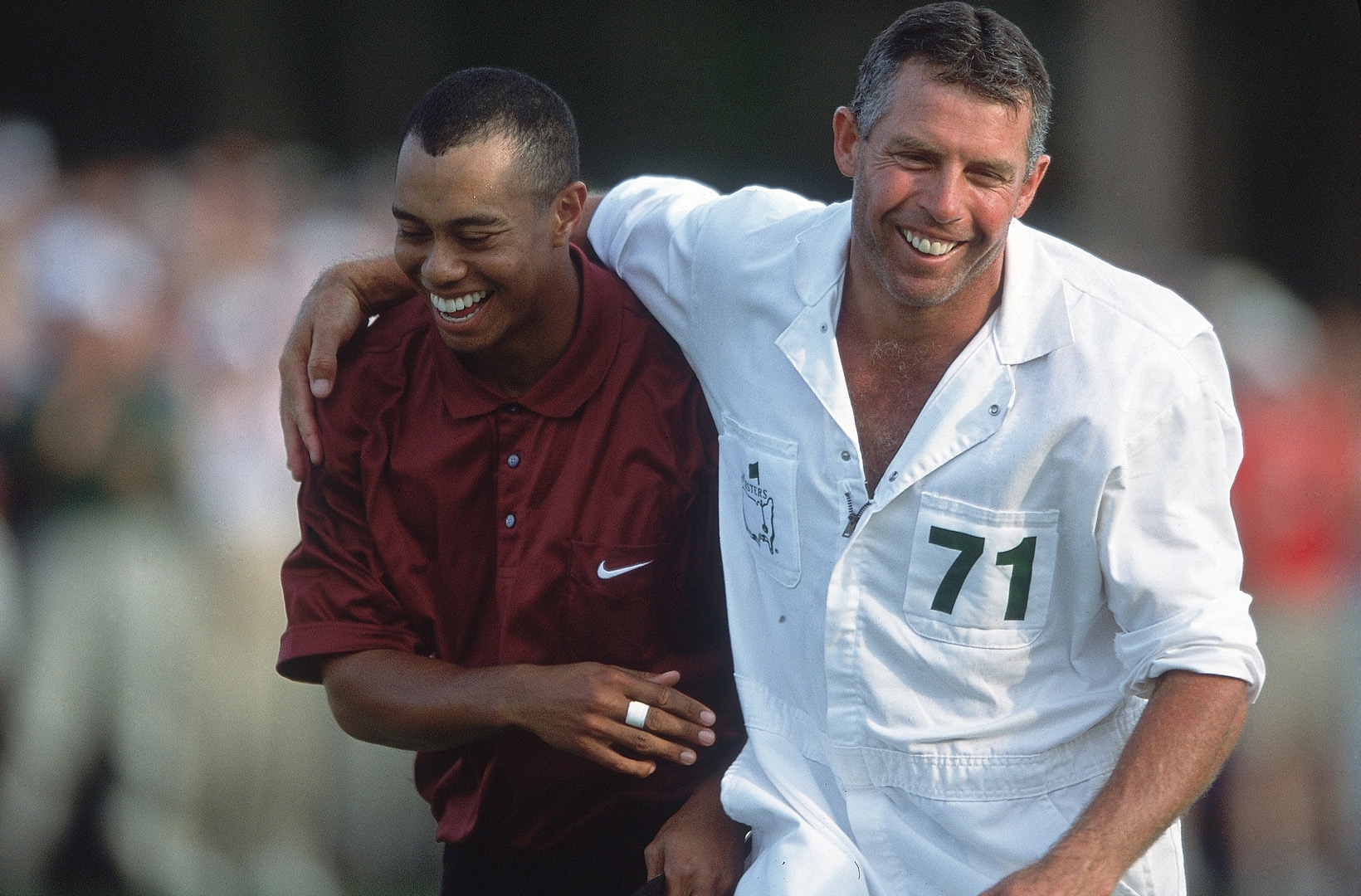 This one finished the most underrated of Woods’ accomplishments, the Tiger Slam. Woods put himself in such a zone during his Sunday 68 – as he said, “so attuned to each and every shot” – that it took him awhile after holing a 15-footer for birdie on the 72nd  that he “had no more shots to play.” His closing 68 distanced him from playing partner Phil Mickelson and beat David Duval, who had tied Woods with a birdie on the 15th, by two. 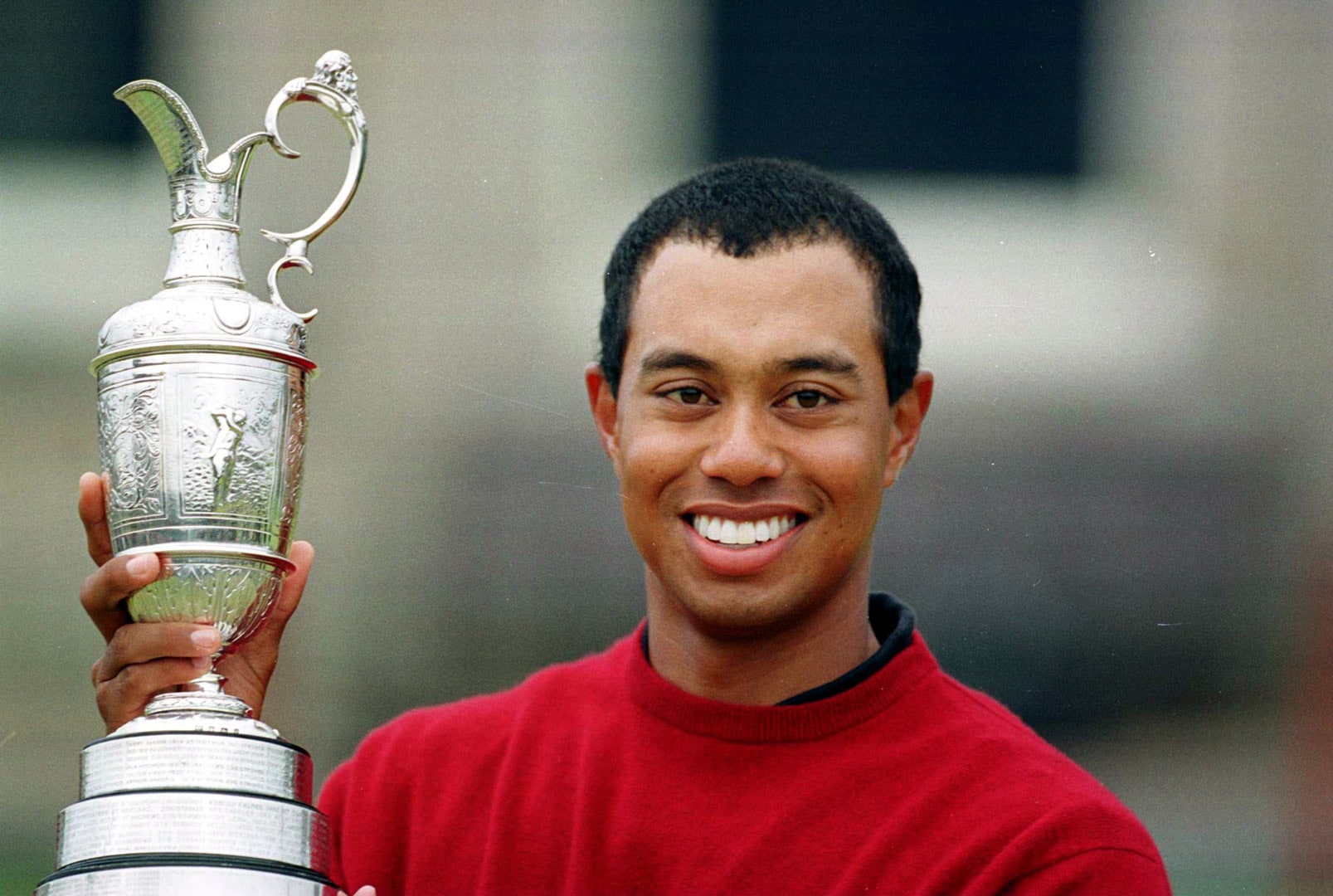 For the utter ease with which he dominated, the majesty of the setting, and the joy with which he played, in many ways, this was Woods’ most impressive performance. With scores of 67, 66, 67, 69, Woods was never threatened as he went wire-to-wire to win by eight over Ernie Els and Thomas Bjorn. Fittingly, in the oldest championship on the oldest course, Woods completed the career Grand Slam at age 24, the youngest ever to achieve the feat. 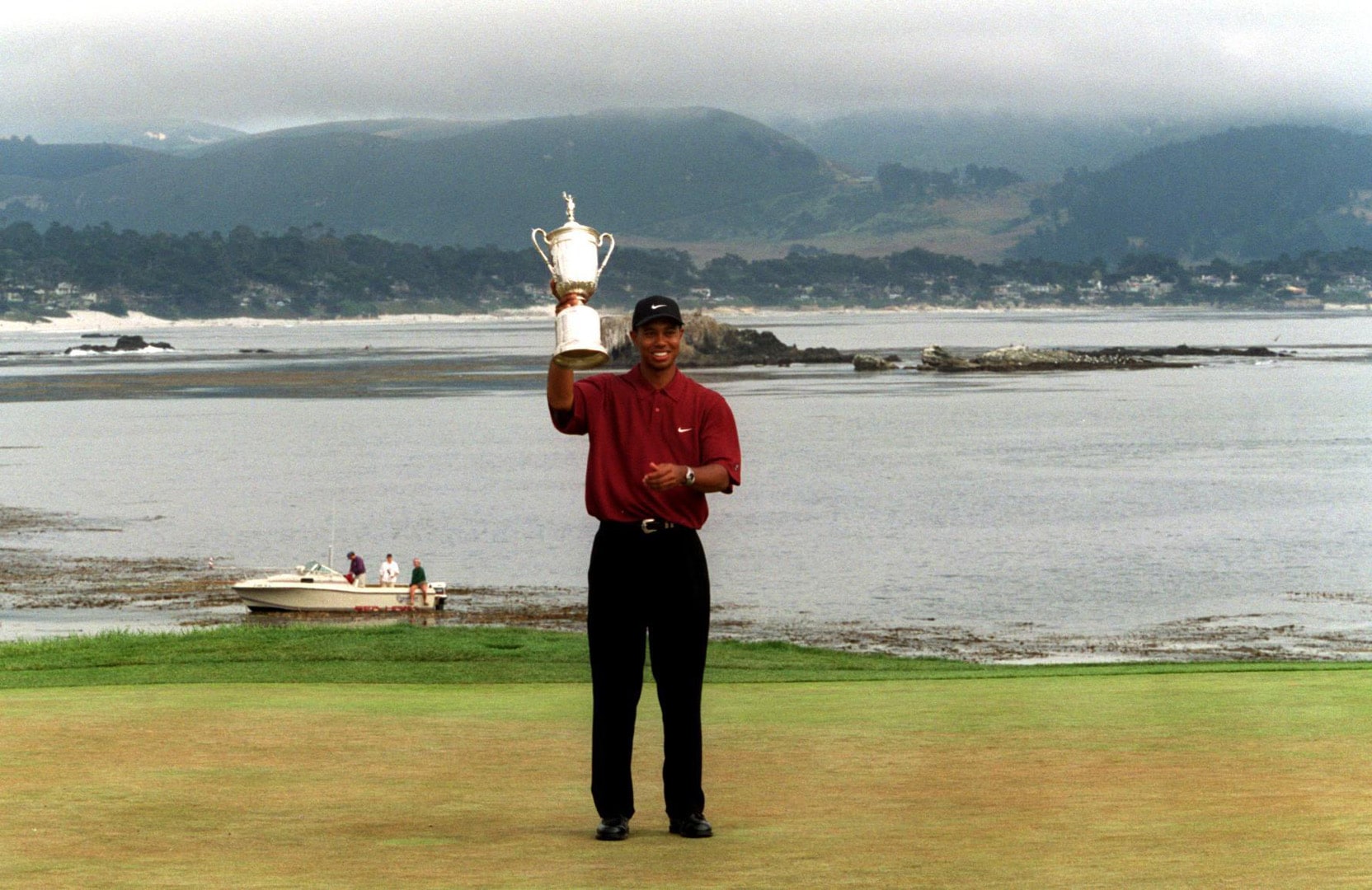 Arguably the greatest golf ever played began the narrative among his resigned peers that Woods had not only risen a level that had never been reached, but one that they couldn’t match. Despite a triple bogey on the third hole on Saturday, he won by 15. He didn’t have a three-putt in perhaps the finest putting performance of his career. The 7-iron that he gouged onto the green from the deep rough more than 200 yards away off the cliffside par-5 sixth hole elicited Roger Maltbie’s classic call, “It’s not a fair fight.” 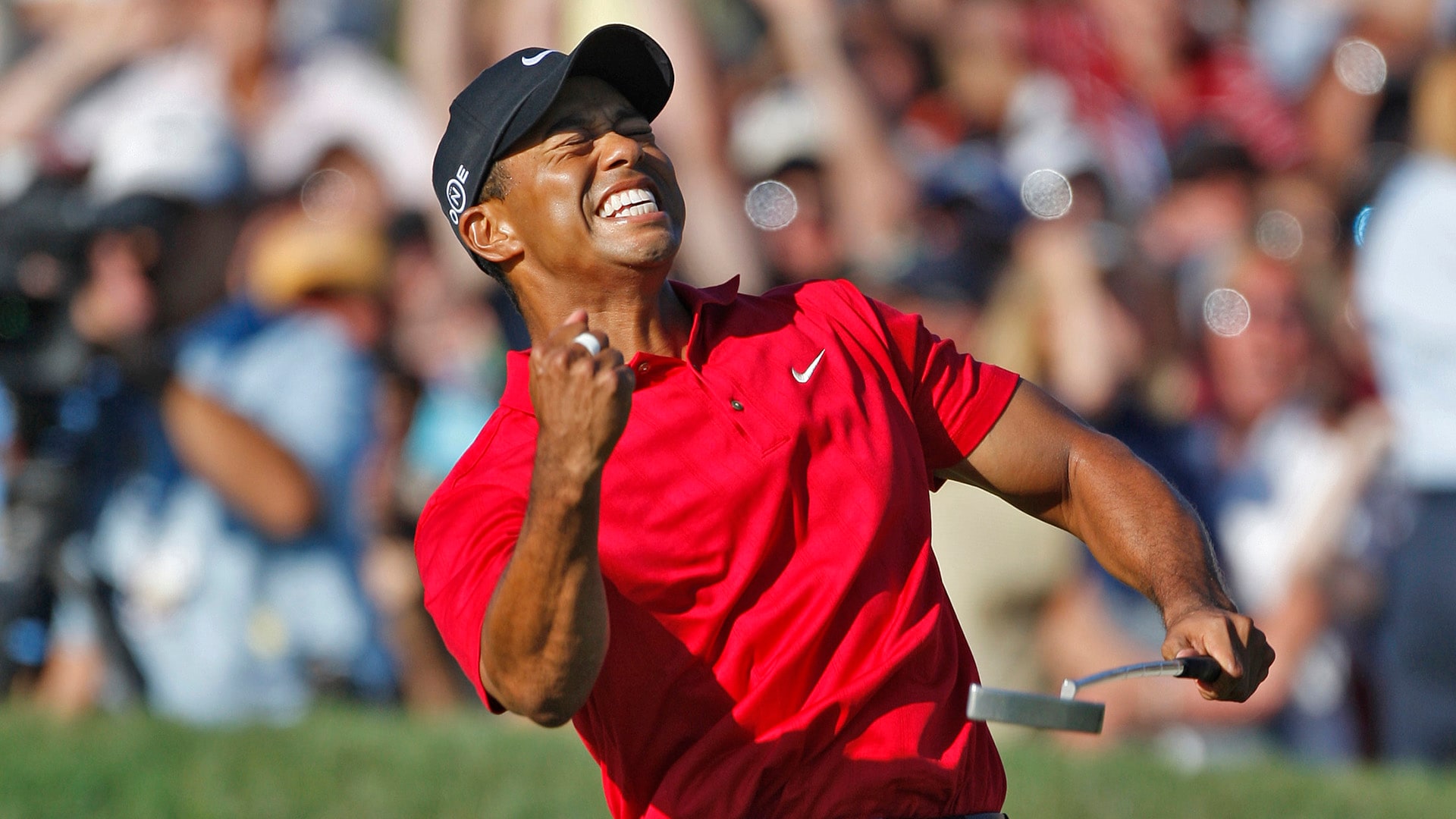 Tiger’s most amazing victory. Diagnosed with a torn ACL and stress fractures in his left tibia, and playing against doctors' advice, Woods’ mantra before and during the championship to caddie Steve Williams was  “Stevie, I don’t give a s--t  what you say. I’m going to win this tournament.”  And while undergoing deep massage each night to reduce swelling and pain, Woods’ refrain to then-trainer Keith Kleven was, “I broke it; you fix it.”  Notwithstanding the knee, it was a miracle Woods won. Consider that he double bogeyed the first hole three of the four rounds. But he made up for that with some of the most spectacular shots of his career, including monster eagle putts on the par-5 13th and 18th holes to end the third round. The 12-footer for birdie on the 72nd hole to get into a playoff with Rocco Mediate stands as arguably the greatest pressure putt in golf history. He had to birdie the 18th hole again in the playoff to go to extra holes, finally winning – exhausted but resolute – on the next hole with a par. 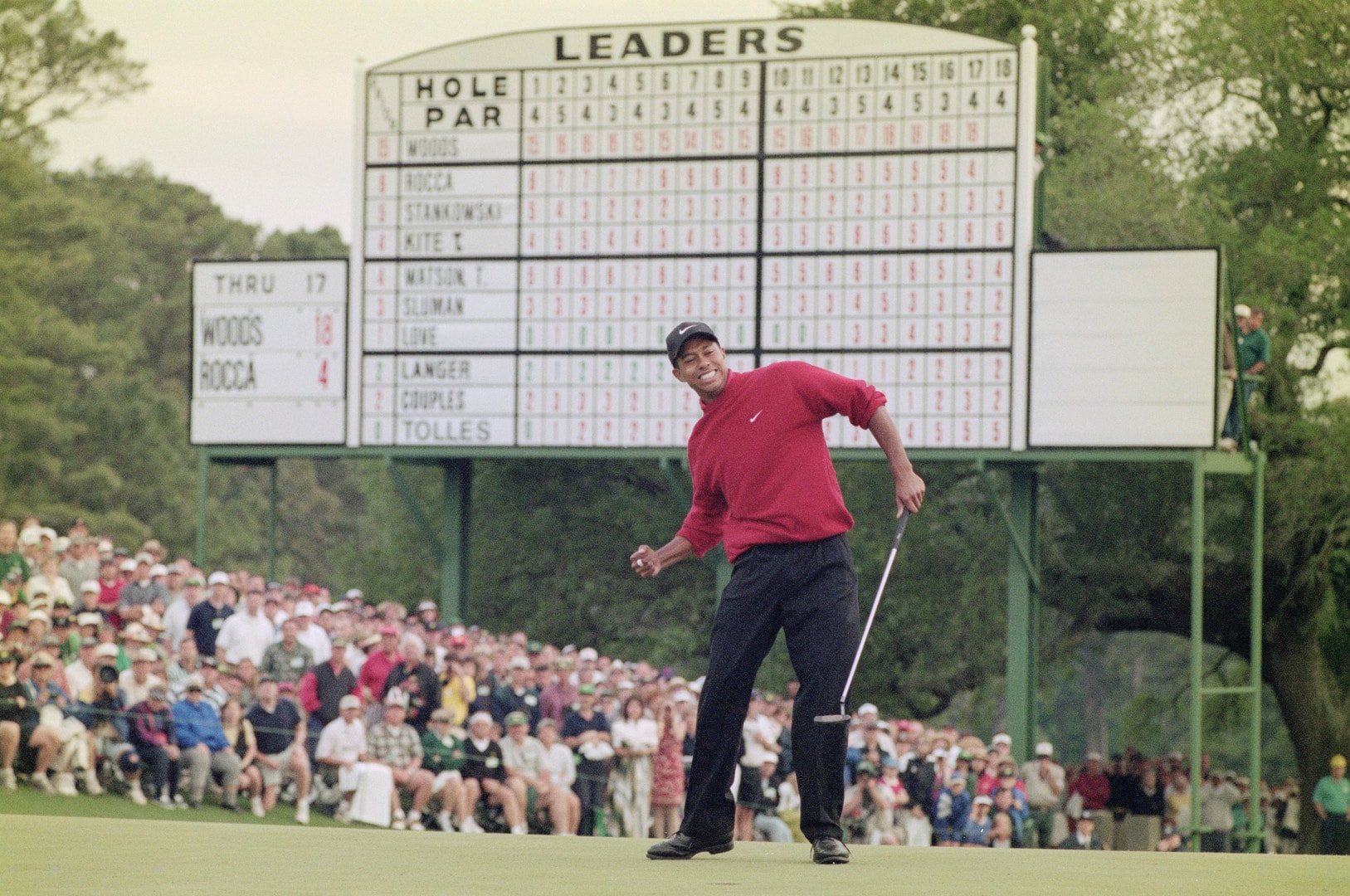 Woods’ declaration of independence from golf’s unofficial boundaries on the possible. In winning by 12 strokes at age 21, Woods brought to life the mythical player who possessed everything – length, control, touch, poise and grit. The victory was all the more remarkable because it began with a shaky 40 on the first nine. But Woods rescued himself by coming home in 30. From there it was a breeze: 65 and 66, each the lowest rounds of the day, and finally a closing 69, all the while averaging 323 yards off the tee, 25 yards more than the next longest. As Ben Crenshaw said late Sunday while observing the awestruck reaction to Woods performance, “It feels like a passing.” Yes, an era had ended, and a new one had been ushered in. 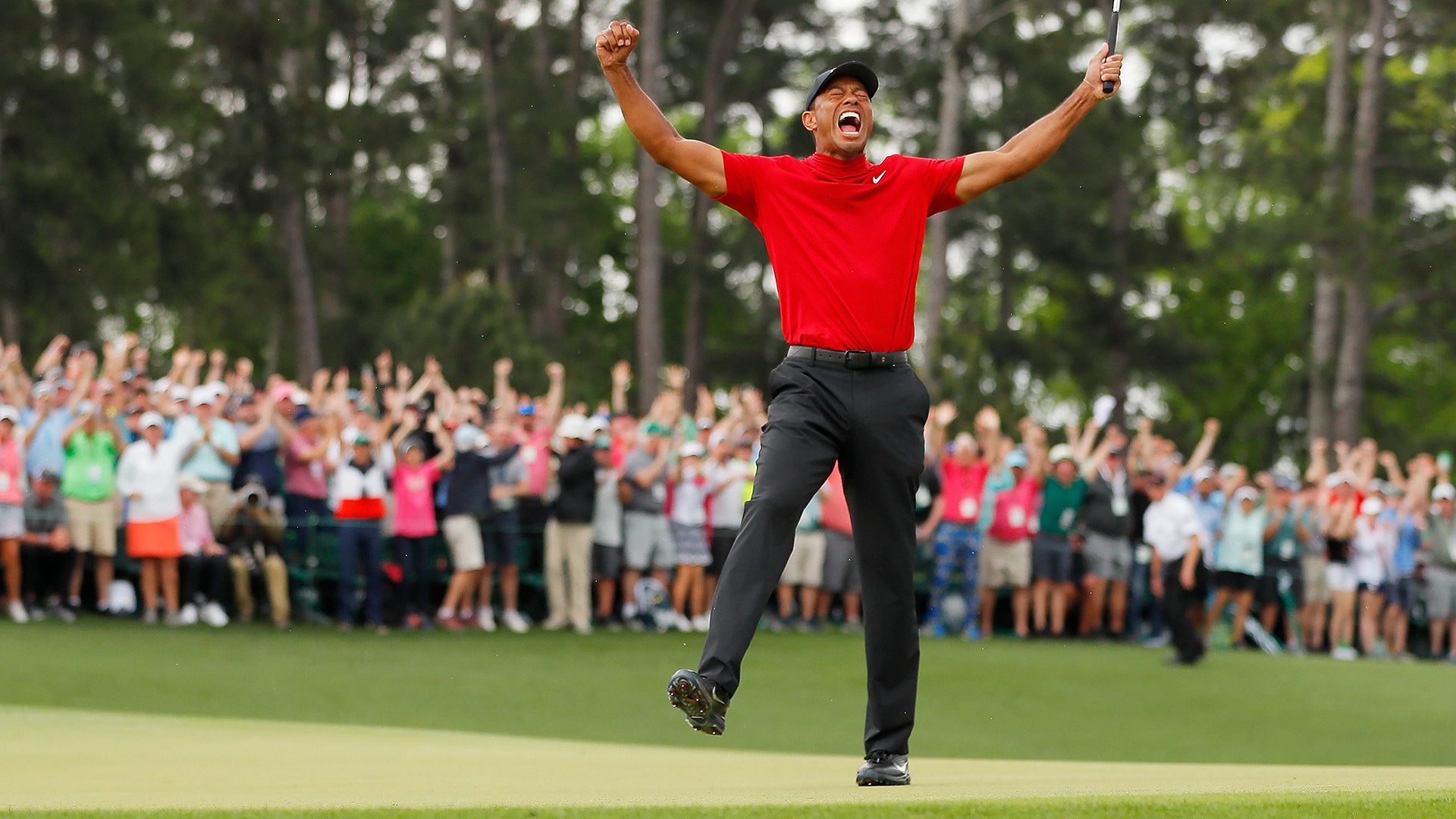 Woods’ fifth Masters connected most of all as a triumph of the human spirit. But just in golf terms, Woods proved that he has regained the last and perhaps most vital heretofore-missing piece of his arsenal – the ability to lock in mentally on a major Sunday and close the show. No doubt he had help, particularly on the 12th hole. But unlike several occasions since 2010 when Woods faltered late while in contention, in ways he never would have in his prime, he played with the poised control of a once-lost genius who’s again gotten his mind right. Last year, I optimistically wrote that for Woods coming into 2019, “the hard part is over and the best part is about to start.” I was losing faith in that forecast in the first three months of the year, but Woods in his preparation clearly made a breakthrough. The Masters changes everything. The optimist in me believes the most compelling record chase in sports – Tiger's pursuit of Jack’s 18 majors – is back on. 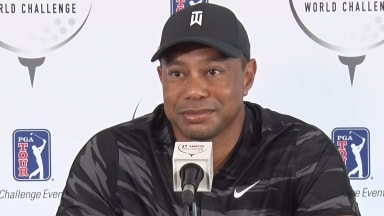 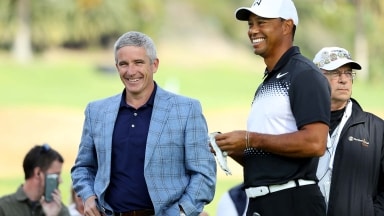