Golf only one of Hahn's many talents 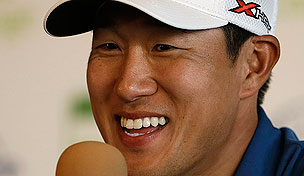 LA QUINTA, Calif. – The short story is that James Hahn shot 63-67 to share the 36-hole lead at the Humana Challenge in only his third career PGA Tour start. Impressive stuff, only that’s probably the least interesting thing about him.

This week, his half-hour sessions with the media have been more couch therapy than interrogation.

For one thing, he smiles. A lot.

He tells revealing stories, like how he still searches YouTube for swing tips. (“I just want my swing to look pretty.”)

He drinks Coke, but only one, because his wife wouldn’t approve of the excess carbonation.

And on Friday, when answering a question about whether he was surprised to be in this position – in a share of the lead with Roberto Castro, at 14-under 130 – Hahn had to interrupt his thought because his cellphone was ringing. His mom was on the other line. Apparently she was surprised too.

Hahn, a native of South Korea who has lived in the States since he was 2, was a strong junior player from a middle-class family – he purchased his early sets on eBay – and attended Cal on a golf scholarship.

His first year on campus, the Golden Bears made the NCAAs. The second year, he played only four events, after the “extracurricular activities” – read: college life – began to affect his standing on the team. The third year, he rode the bench. The fourth year, well, he finally decided he had had enough – he quit the team before his senior season.

And, of course, one year after Hahn graduated, Cal won the NCAA Championship.

“The running joke,” he says now, “was they finally had to kick James off the team to win a championship. But I was destined not to make that the end of my golfing career.”

That doggedness was tested, repeatedly. After turning pro in 2003, he burned through his savings in three months and searched for oddball jobs to get by. He didn’t pick up a club for a year.

He invested in airline stocks after Sept. 11. He traded stocks daily for three or four months, turning a $3,400 profit.

In 2004, he earned his real-estate license, though that proved a short-term gig. One of his best clients wanted to buy an $800,000 duplex in an Oakland suburb, except that the man owned a 1989 Nissan Maxima that was worth $4,000 (still was not paid off) and worked as a bus driver making $10 an hour.

So he quit that, worked for a marketing company, then an advertising agency. And then, from 2005-06, he sold women’s shoes at Nordstrom.

Naturally, he was asked: Did you take the job to pick up girls?

Bored after a year, he soon started as an assistant pro at Richmond (Calif.) Country Club, where he could practice and play full-time while also earning a little coin on the side.

In the fall, he went to Canadian Tour Q-School. Didn’t make it. Undeterred, he plopped down $6,000 to sign up for the U.S. Pro Golf Tour. The circuit went under a month after the check cashed.

At the end of the year, and with his opportunities dwindling, he flew to Malaysia for one last shot: Korean Tour Q-School. He advanced, played the tour in 2007, and got through Canadian Tour Q-School the following fall.

Late in 2008, and with just $288 in his bank account, he found himself looking online for jobs and needing a good week in Edmonton. Anything less, and he would need to borrow money to fly home. He finished eighth there, then a season best, and spent another year on that circuit before graduating to the Web.com Tour, where he spent 2010-2012.

Last year, it all came together during an impressive campaign in which he won once, was runner-up twice, and finished fifth in earnings, punching his ticket to the PGA Tour. It was the culmination of a lifelong dream, to be sure, even if the Big Show hasn’t yet been everything he expected.

And then he laughed.

“But we haven’t even hit the heart of the schedule yet,” he said. “Come talk to me after Phoenix.”