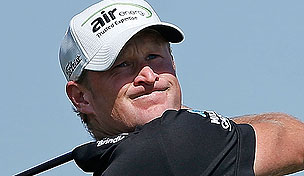 Getty Images
VIRGINIA WATER, ENGLAND - MAY 20: Rory McIlroy of Northern Ireland tees off at the 1st hole during the first round of the BMW PGA Championship on the West Course at Wentworth on May 20, 2010 in Virginia Water, England. (Photo by Ian Walton/Getty Images)  -

Justin Rose, ranked No. 5 in the world, had hoped to make a statement for 2013 with a victory in the Abu Dhabi HSBC Championship. Instead, it was Welshman Jamie Donaldson who wound up hoisting the trophy.

Donaldson, ranked No. 47th, made five birdies and a final-hole bogey in shooting a 4-under 68 to finish at 14-under 274. Rose, who held a two-shot lead going into the final round, closed with a 71. Oleson shot a final-round 69.

Rose made four birdies but also had three bogeys. He had a 12-foot birdie putt to force a playoff, but the ball lipped out and he tossed his putter in the air in frustration.