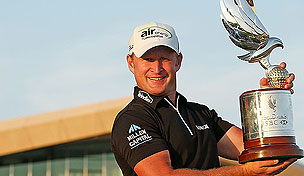 ABU DHABI, United Arab Emirates - Jamie Donaldson won the Abu Dhabi Championship by one shot Sunday, with Justin Rose narrowly missing a birdie putt on the 18th that would have forced a playoff.

Rose's 8-foot putt rimmed out of the hole, giving the Welshman his second European Tour victory. He shot a 68 to finish at 14-under 274.

Rose (71) threw his club up in the air in frustration while Donaldson flashed a relieved smile. Rose tied for second with Thorbjorn Olesen (69) of Denmark, who also failed to force a playoff on the 18th when his 15-foot birdie putt rolled past the hole. Olesen, playing with Rose, had putted first.

''It was a tough field, brutal golf course,'' said Donaldson, whose win will move him in into the world's top 30.

It was the fifth-ranked Rose's tournament to lose. The Englishman had a two-shot lead over Donaldson and Olesen and led all week, hitting greens and making timely putts. But he was shaky from the start Sunday, scrambling early to save pars and then hitting errant drives on Nos. 5, 11 and 16 that led to bogeys, while finding it difficult to read the greens.

''It was definitely hard work today,'' Rose said. ''You want to close out with a chance to win when you have it and didn't do that today. But I didn't do a lot wrong, either.''

''It was annoying to finish like that,'' Donaldson said. ''But you need a little luck sometimes in golf to win.''