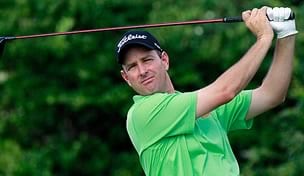 PONTE VEDRA BEACH, Fla. – One hundred forty-four of the world’s best golfers are competing at this week’s Players Championship, all vying for the $1.71 million prize that awaits the winner. They will acknowledge each birdie with ecstasy, each par with relief, each bogey with anguish.

They will live and die with every stroke of the club, this assembled group of world-class professionals.

No, Klauk has the talent to play in this tournament.

It’s his brain that’s holding him back.

Klauk grew up here at TPC-Sawgrass, headquarters for the PGA Tour. For 23 years, his father, Fred, was the golf course superintendent, the man largely responsible for ensuring the venue looked and played to the standards of such an elite championship.

The family lived just off the 12th hole of the Valley Course, the other 18-holer on this property. It was only a 15-minute walk for Jeff and his brothers to reach the first tee at the Stadium Course, a walk they routinely made during their youth.

During the summer months, Jeff and one brother, John, worked for their father, mowing fairways and greens all morning, then grabbing a quick lunch before either practicing or playing in the afternoon.

“Oh, it was great,” Fred says of those days. “It taught them so much. They were both aspiring professional golfers and it made them appreciate all the work that goes into hosting a tournament.”

It wasn’t just a golf course to the Klauks. It was a home. One on which Jeff estimates he’s played “close to 1,000 times” as a junior player, collegian and member of the PGA Tour.

Yes, dreams do come true, and the kid who was raised in the epicenter of the most important golf circuit in the world was able to realize his.

After a lengthy career on the developmental Nationwide Tour, during which he earned more than $1 million, Jeff Klauk finally reached the PGA Tour for the first time in 2009. But that wasn’t good enough. Much like an Augusta, Ga., native pines to qualify for the Masters, he desperately wanted to make the field at The Players, competing in front of friends and family on his home course.

That’s no easy task for a rookie, but Klauk got off to a flying start that season. He finished T-12 at the Sony Open, T-11 at the Buick Invitational and solo fourth at the Honda Classic. By the time the calendar turned to May, he had made the cut in 11 of 13 starts – and gained entry into The Players.

“It was quite a thrill to be able to play in The Players Championship,” he recalls. “It was always a dream of mine.”

He didn’t just play. Klauk posted rounds of 71-72-70-71 to finish in a share of 14th place, ahead of such major champions as Phil Mickelson, Ernie Els and Padraig Harrington.

It was an impressive display of golf considering all the pressures of competing in front of the hometown galleries. It was even more impressive considering what he was battling personally.

On June 16, 2006, following a second-round 69 at the Nationwide Tour’s Knoxville Open, Klauk was asleep at a friend's house when he suffered a grand mal seizure. He withdrew from the event, but continued playing scheduled tournaments until he suffered a second occurrence two months later in Scranton, Pa.

“It was surprising because we’d had no problem up to then,” he says. “That was our wakeup call.”

After consulting with doctors and being diagnosed with epilepsy, Klauk was put on a drug called Trileptal, which completely eliminated the grand mal seizures. How could he tell it was working? After missing the cut at Pebble Beach in 2010, he flew home and forgot to take the medication. Without it, he suffered yet another episode.

Other than that occasion, he has remained free of grand mal seizures. In December of 2010, though, while driving to church with his wife Shanna and their two young children, Klauk became lightheaded and unresponsive.

“All of a sudden, I kind of spaced out,” he recalls. “I did a little chuckle laugh and Shanna asked me a question, but I was just spaced out.”

The Klauks met with a neurologist who performed testing on an Epilepsy Monitoring Unit. It revealed that Jeff was suffering from complex partial seizures without ever being aware of them.

“I don’t have an aura that I’m having them,” he explains. “That would change things. If you know you’re having them, you’d stop what you’re doing and make it a safe situation.”

Instead, he’s had to make concessions. He doesn’t drive anymore and, coupled with rotator-cuff surgery and ankle surgery, he hasn’t competed in a PGA Tour-sanctioned event since last year’s Wichita Open.

Medication has helped reduce the seizures, but hasn’t eliminated them completely.

“They have controlled the seizures to an extent, but they’re not fully controlled,” Klauk says. “I’ll have one or two now and then, but it’s not to the extent that it makes us feel comfortable with me driving. They normally happen when I’m tired and I’ve had a long day, and a lot of the times they happen late at night, right after dinner or before I go to bed.”

The situation led to an agonizing conundrum: Live a life of compromises or seek the necessary steps to have them eliminated?

It wasn’t an easy decision.

With his complex partial seizures limited by the medication, Jeff Klauk is going to live. He is going to be able to enjoy his family life and remain relatively pain-free, the previous rotator-cuff and ankle injuries notwithstanding.

He’ll be restricted, though. Won’t be able to drive a car. And, more importantly, could see the condition take a toll on his golf game.

For these reasons, he’s elected to employ medical technology to help eliminate the continual seizures. In November, he underwent another EMU at Emory University Hospital in Atlanta to try to pinpoint where they were emanating. The process wasn’t successful, so Klauk took the next step.

Just three weeks ago, he checked into Emory for what is called intracranial monitoring. During a nine-hour procedure, Klauk had strips implanted inside both sides of his head, hooked up to 108 electrodes.

After 18 days of not being able to leave his room, let alone the hospital itself, Klauk was informed by neurologists that the seizures were coming from the left frontal part of his brain.

That was the easy part. Now comes the hard part.

This past Wednesday, Klauk returned to his St. Augustine home – just 30 minutes from his childhood home next to TPC Sawgrass – both hopeful and anxious.

There aren’t many people who would be galvanized by a second elective brain surgery, but that’s exactly what he is hoping for. At some point in the next month, Klauk will find out whether he is a candidate to have another nine-hour procedure called a craniotomy, during which he would have a grid placed on the left side of his brain, potentially eradicating any further seizures.

Klauk calls it an invasive operation and a “very big process,” but understands its importance for his long-term well-being.

“That surgery gives me hope,” he says, “that I could possibly be seizure-free after all this.”

All of which should lead to one simple yet complicated question: Why?

Why risk having multiple brain surgeries when the condition isn’t life-threatening? Why spend weeks and months in and out of hospitals? Why put yourself through all of this if it isn’t necessary?

Klauk understands the questions, but counters with easy answers.

“If I don’t try to become seizure-free, I’d have to live the rest of my life asking, ‘Why did I not give this a try?’” he contends. 'I’d always say, ‘Maybe if I had done it, I would be seizure free.’”

“Your main job as a wife is to support your husband,” Shanna says. “It’s the choice that he wanted to make. I’m not going to hold him back from something that’s going to change his life.”

Don’t underestimate the role that golf has played in his decision, either. Klauk desperately wants to return to the PGA Tour – he has eight tournaments remaining on a medical extension – and more than anything wants to return right back here, competing again at The Players Championship on the course he knows and loves so much.

“I think the golf is probably driving the bus,” says his father, Fred. “I think he’s taking a gamble, he’s risking a lot of things, because that’s where he wants to be. He wouldn’t be doing all of this if it wasn’t for golf.”

“I’d like to get it over with as soon as I can,” adds Jeff, “so I can get my normal life back on track and I can get out and play.”

When he does return to the PGA Tour, he will come bearing a greater perspective on things outside of the game.

Klauk is quick to point out that his ordeal is “nothing” compared to that of Jarrod Lyle, a fellow pro who is currently undergoing leukemia treatments in his native Australia. He also maintains that he wants to get involved with the Epilepsy Foundation, helping others dealing with similar afflictions.

On Friday afternoon, two days after returning home from his 18-day stay at Emory, Klauk and his family were back at The Players Championship. Jeff and Shanna walked the familiar venue with Jackson, 7, and Bridget, 3, in hopes of giving the kids a chance to see Tiger Woods.

Wearing a white Titleist cap that barely hid large scars bordered by stitches on either side of his head, Klauk saw some old buddies. Tournament leader Zach Johnson, in particular, said that he’s continually keeping him in his prayers each day. It’s a common sentiment amongst his brethren.

“I’ve gotten so many letters and notes from guys on Tour that it wouldn’t even be fair to give names out, because I’d forget people,” he says. “They’re thinking about me; that means a lot to me. When I was in the hospital, I got a lot of those notes. That was a great surprise, just helped me stay strong when I was in there.”

The prayers and letters will continue while he enters the next phase of his battle, his recovery and his life. As he walked around the course, Klauk was home again. It’s a long road that he’s traveled to get back here. The journey, though, is far from over.