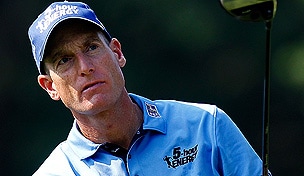 MARANA, Ariz. – Jim Furyk told GolfChannel.com that the PGA Tour Policy Board convened for a 45-minute conference call Monday and likely will issue a formal reply to the governing bodies’ proposed ban on anchoring in a “few days.”

That meeting came an hour after about a dozen members of the Player Advisory Council held a separate call with commissioner Tim Finchem. Asked to describe the first call (which he did not hear firsthand), Furyk said: “It wasn’t like an eight-to-eight split. It was very lopsided one way. It kind of gave us an idea of where we thought we might want to go and what we might want to write in our letter (to the USGA).”

In November, the U.S. Golf Association and Royal & Ancient proposed a rule to ban anchoring, which would take effect in 2016, when the next edition of the Rules of Golf is published. The 90-day comment period for the proposed rule ends on Feb. 28.

Source: Much opposition to anchoring ban by PAC

Said Furyk, “We’re not discussing what we’re going to do – if the USGA does this, how are we going to reply; if the USGA does that, and so on. That’s down the road. We have to wait and see what the USGA indeed does do and then we can figure out what our job is at that point. For right now, it was just a real friendly talk getting ideas.”

On Sunday, Brad Faxon wrote a web column in which he said that on Monday’s call Finchem would “persuade the board that the Tour should urge the USGA to withdraw the proposed ban.”

Furyk, however, said such talk is premature.

“The USGA asked for the different bodies of golf to give their opinion,” he said. “Right now, we’re in the process of just giving our opinion on what we think is the best for the game of golf.

“Whether or not we agree with the USGA and we’re going down that road, we disagree or we’re going against the USGA, that bridge hasn’t been crossed. We haven’t even gotten to that bridge yet. We’re in the comment stage.”