Shin turning heads with hair and play at LPGA Founders 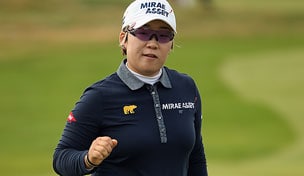 Her hair looks like some sort of wild fire.

Shin, who opened the Founders Cup with a 67, has been dying her black hair exotic colors for a couple years now. She wore it wheat blond in this event last year.

Shin has been hitting red numbers a lot lately. After winning eight LPGA events between 2008 and ’10, she was winless in ’11 and most of ’12 as she struggled with a hand injury. After undergoing surgery last June to have a piece of bone removed from the bottom of the palm of her left hand, she took two months off. Upon her return, Shin won the Kingsmill Championship and Ricoh Women’s British Open in back-to-back weeks in September.

Shin, though, said she lost strength recuperating during her layoff. She has since gained it back in a regular fitness program.