Spaun leads in Vegas; ready to take next step

LAS VEGAS – Now in his second year as a full-time PGA Tour member, J.J. Spaun is ready to make the jump from also-ran to contender.

“I’ve had a year’s experience now on the Tour,” he said Friday, “and this year it’s kind of just taking my game to the next level instead of being someone who lingers around the cut or top-20s. It’s time to step up if I want to do something big out here on Tour and make a name for myself.”

After two rounds at TPC Summerlin, he’s 36 holes from being named a champion.

Rounds of 66-65 have Spaun three clear of the field at the Shriners Hospitals for Children Open, with play suspended because of darkness.

After making the turn in 3 under, he dropped his only shot of the day at the par-4 third but followed it up with back-to-back birdies at Nos. 4 and 5. He added one last circle on his final hole of the day, the par-5 ninth, to take control heading into the weekend.

Spaun had success during the early part of this year, racking up top-10s at Torrey Pines, TPC Scottsdale and Harbour Town.

That was before a rib injury halted his momentum and forced him out of action for the month of June. Once he returned, he struggled to regain his confidence and form before reaching the end of his season at the Dell Technologies in Boston.

Spaun would certainly make the kind of leap he envisions with a win this week in Vegas. The Shriners title comes with 500 FedExCup points, PGA Tour membership through the 2019-20 season, and an invite to his first Masters next April.

“I feel like I had a lot of experience last year early on in the West Coast swing,” he said. “I think, for me, it was kind of figuring out how to deal with such a long season last year, and that’s why kind of in the second half, I just tailed off and stayed quiet, didn’t make a lot of noise.

“But now it’s [about] trying to get myself in contention and make a name for myself. You’re not a baby anymore. So it’s time to step up and do something big.” 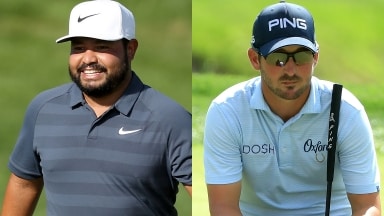 J.J. Spaun matched his best score of the year with a 7-under 63 to share the lead with Andrew Landry in the Quicken Loans National. 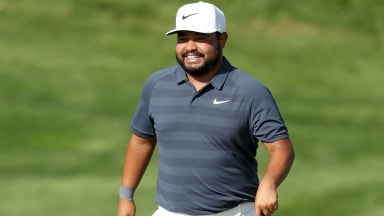 If a guy a shoots a course-record 63 and no one sees it, does it still count? It does, but J.J. Spaun had few witnesses thanks to Tiger Woods.