How Huh got his groove back after equipment swap 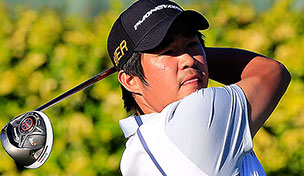 ORLANDO, Fla. – Much was made of Rory McIlroy’s wholesale jump to a new equipment deal this year, but there has quietly been another rising star who has struggled with new gear in the bag in 2013.

That was until Thursday at Bay Hill.

John Huh, last year’s Rookie of the Year, has one top-20 finish this season – and that was at the limited-field Hyundai Tournament of Champions – compared to his torrid start last season that included a victory in Mexico and top-15 finishes at Torrey Pines and Phoenix.

“The main excuse would be the equipment change,” said Huh, who changed all but one club this season in his transition to TaylorMade.

It was a much more subtle equipment swap, and a pep talk from his father, that seemed to turns things around at the Arnold Palmer Invitational. Huh opened with a one-bogey 67 and is alone in second place, two strokes behind Justin Rose.

Huh had planned to visit Augusta National to prepare for his first trip down Magnolia Lane on Monday but instead he showed up at Bay Hill early to practice and work on his putting. He switched back to a center-shafted putter, like the one he used last year, and received a boost from his father.

“You’re not going to play as well as you think,” Huh said. “I talked to my dad and he said, ‘Just go out and have fun and enjoy every moment.’”