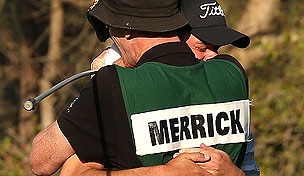 LOS ANGELES – John Merrick was a young face in the crowd at Riviera for so many years, dreaming of one day playing the fabled course on the PGA Tour.

On Sunday, he did better than that. He won on it.

Merrick hit two clutch shots that led to two pars in a sudden-death playoff and won the Northern Trust Open on Sunday when Charlie Beljan missed a 5-foot par putt on the second extra hole.

Merrick, who closed with a 2-under 69, became only the ninth player make this tournament his first PGA Tour victory. It could not have come at a better place. Merrick grew up in Long Beach, attended this event as a kid and went to school down the street at UCLA.

''I can't put this into words,'' he said off the 10th green, his eyes welling with tears. ''Growing up as a kid, coming out here, I just wanted to play this tournament.''

It was a tough finish for Beljan, famous for having an anxiety attack when he won at Disney late last year. He holed an 18-foot birdie putt on the 18th hole, similar to the theatrics provided last year by Phil Mickelson and Keegan Bradley, to close with a 4-under 67 and wind up in a playoff.

He had to make a tough 6-foot putt for par on No. 18 on the first playoff hole. Going to the par-4 10th, 315 yards of sheer nerves, Beljan drove long and left, and his chip didn't reach the green. He putted his third shot just above the hole, and watched it slide by on the left for a bogey.

Beljan also made bogey on the 10th hole in regulation.

The key for Merrick might have been on the par-5 17th in regulation, when he pulled his second shot from a bunker toward the eucalyptus trees, only to find that he had just enough of a gap to go at the green and escape with par.

More great recoveries followed in the playoff. He was well to the right of the 18th fairway, and hit a hard punch shot that rolled just over the back of the green and allowed him to get up-and-down for par. On the second hole, the dangerous 10th, he laid up too far to the right – nothing short of a perfectly struck wedge could stay on the green, and he pulled it off, the ball settling 18 feet away. A few inches longer and it would have tumbled into the back bunker.

Merrick, who finished at 11-under 273, moved to No. 4 in the FedEx Cup and is virtually assured of qualifying for his first World Golf Championship next month at Doral.

Fredrik Jacobson missed a 4-foot par putt on the 18th hole that would have put the Swede in a playoff. He wound up with a 69 and tied for third with Charl Schwartzel (70) and Bill Haas (73), who also had chances to win at different stages in their rounds.

The final round contained far more drama than anyone imagined at the start of the day, when Haas had a three-shot lead. Six players were separated by one shot going into the final hour at Riviera, and it easily could have been a repeat of that six-man playoff in 2001 in the cold rain.

Hunter Mahan was tied for the lead after a 30-foot birdie on the 14th, only to drop four shots on the last four holes. Nothing stung worse than the par-5 17th, where he three-putted from about 30 feet for bogey. He wound up with a 69. Jacobson was tied for the lead when he missed an 8-foot birdie attempt on the 17th, and then badly pulled a 4-foot par putt on the last hole and missed out on the playoff. The Swede closed with a 69, and bristled when asked about the final hole.

''You want me to touch that one, only that one? I cannot speak about something else?'' he said, before eventually conceding, ''The last putt wasn't very good.''

No one was more disgusted than Schwartzel, the former Masters champion. One shot out of the lead, he missed a 10-foot birdie putt on the par-3 16th, and then three-putted the 17th, missing a 6-footer for birdie. He closed with a 70 and tied for third, his seventh straight finish in the top five around the world.

Haas faded much sooner. He made five bogeys in a seven-hole stretch in the middle of his round, and his birdie-birdie finish allowed him to tie for third.

''Positives to be taken, but overall, you don't get this many opportunities,'' Haas said. ''A three-shot lead at one of the best tournaments of the year is a great opportunity that I squandered.''

Haas looked to be in good position to join Mickelson, Mike Weir, Corey Pavin and Ben Hogan as the only back-to-back winners at Riviera. And when he dropped in a 30-foot birdie putt on the third hole, he looked as though he would be tough to catch.

Instead of running away from the field, he let everyone back into the tournament. Haas made back-to-back bogeys late on the front nine, and his lead was down to one when he made the turn. It all began to take shape at No. 10, the hole where a year ago Haas holed a 45-foot birdie putt to win in a playoff.

Merrick laid up on the short par 4, and his wedge was inches from tumbling into a front bunker when it checked up on the fringe. He made birdie from just inside 15 feet and tied Haas for the lead. Mahan went from the front bunker to the back bunker and still saved par with an 8-foot putt, which loomed large when he wound up in a tie for the lead a few holes later.

There was no shortage of clutch shots over the final hour, even if some of those putts were for par.

Merrick fell out of the lead with a bogey from the ditch left of the 13th green, and he was showing signs of a quick fade until he poured in a 25-foot par putt on the next hole, just moments after Jacobson holed a 30-foot par putt.

Beljan's only bogey in the final round was on the 10th hole. He was flawless the rest of the way, until coming to the 10th hole in a playoff with the tournament on the line.