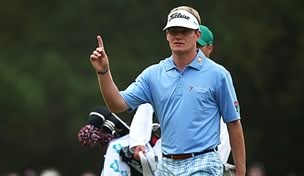 Anthony Mangun and his son, Gentry, who is Peterson’s caddie, both knew what would motivate the player on the eve of the Masters.

Surfing web sites, Gentry found a predictions list in which Masters’ participants were grouped. Peterson did not make the “likely to win” category, nor did he make the “just glad to be here” category. No, Peterson was listed among “Those who won’t be here Saturday.”

So, Anthony and Gentry had some fun with Peterson the day before he teed it up in his first Masters.

“We picked on him a little bit,” Anthony said behind the Augusta National clubhouse after the round.

Peterson responded just as the Manguns expected he might. He posted a 1-under-par 71 in the first group off to position himself nicely to not only stick around for Saturday, but maybe something more. Peterson did, after all, earn his way here making a run at winning the U.S. Open last year. He tied for fourth at the Olympic Club to get his Masters invite.

“I was like, 'I'm going to free it up and kill it and see where it goes,’” Peterson said of his Masters plan. “That's what I did. If guys are going to expect me to miss the cut, I might as well go and try to prove them wrong.”

Peterson, 23, a former LSU All-American, is playing the Web.com Tour this year. He’s the first player to compete in the Masters as a member of that tour.

About the low expectations prognosticators showed Peterson, he seemed to thrive in wanting to prove them wrong.

“It doesn’t matter if other people don’t think I can play,” Peterson said. “I believe I can play.”

Peterson said he didn’t come to Augusta National just to try to make the cut.

“I always feel like I can contend,” Peterson said.

Back in the summer of 2011, Peterson created a stir with comments he made after amateur Harris English won the Nationwide Children’s Hospital Invitational on the PGA Tour’s developmental tour with Peterson finishing second as an amateur.

Peterson’s youthful exuberance got a lot of play nationally, and Peterson ended up being snubbed when the U.S. Walker Cup team was selected.

His run at last year’s U.S. Open, and his strong start at the Masters shows how he relishes the game’s big events.

“I feel like I play my best in the biggest events,” Peterson said. “I have always been like that, going back to junior and amateur golf.”