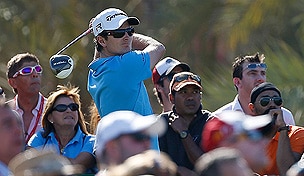 With both Tiger Woods and Rory McIlroy no longer in the mix, Justin Rose continued his steady play, increasing his advantage to two shots heading into the final round of the Abu Dhabi HSBC Golf Championship.

Despite a bogey on his opening hole, the Englishman righted the ship with a stretch of five birdies in six holes to close his outward nine, ultimately carding a 4-under 68. Sitting at 12-under 204, he leads by two shots over Thorbjorn Olesen and first round co-leader Jamie Donaldson.

'Things went well the whole day, to be honest with you,' he said after the round. 'Every time I had the club in my hand, I felt like I was going to hit a good shot.'

Having tied for eighth in his first appearance at Abu Dhabi Golf Club last year, Olesen fired a bogey-free round of 3-under 69 for the second consecutive day, as the Dane has now dropped only a single shot through 54 holes. Donaldson, who seeks his first top-10 finish in his seventh Abu Dhabi appearance, made just one bogey Saturday en route to a round of 69 that matched Olesen's effort.

A pair of former major winners entered Saturday's third round in contention, but were unable to make any significant movements on the field. Hoping to continue a career resurgence in 2013, former U.S. Open winner Michael Campbell is one of three players tied for seventh, five strokes back, after a 3-under 69 only saw him fall one shot further off the leader's pace. Martin Kaymer, the sole survivor of the tournament's marquee early-round pairing, carded a 2-under 70 Saturday and will begin the final round tied for 11th, still holding slim hopes of winning his fourth Abu Dhabi title since 2008.

They are all chasing Rose, however, who has now held a share of the lead after each round and is in prime position to begin his 2013 season on a high note. Sunday will mark the third time that the Englishman has taken a lead into the final round on the European Tour – most recently at the 2007 Volvo Masters – and he left Sunday with the trophy in hand on both prior occasions.

'It's a great opportunity, first tournament of the year to go out there and play with a lead,' he added. 'Those are situations that hopefully I'll put myself in a lot this year.'