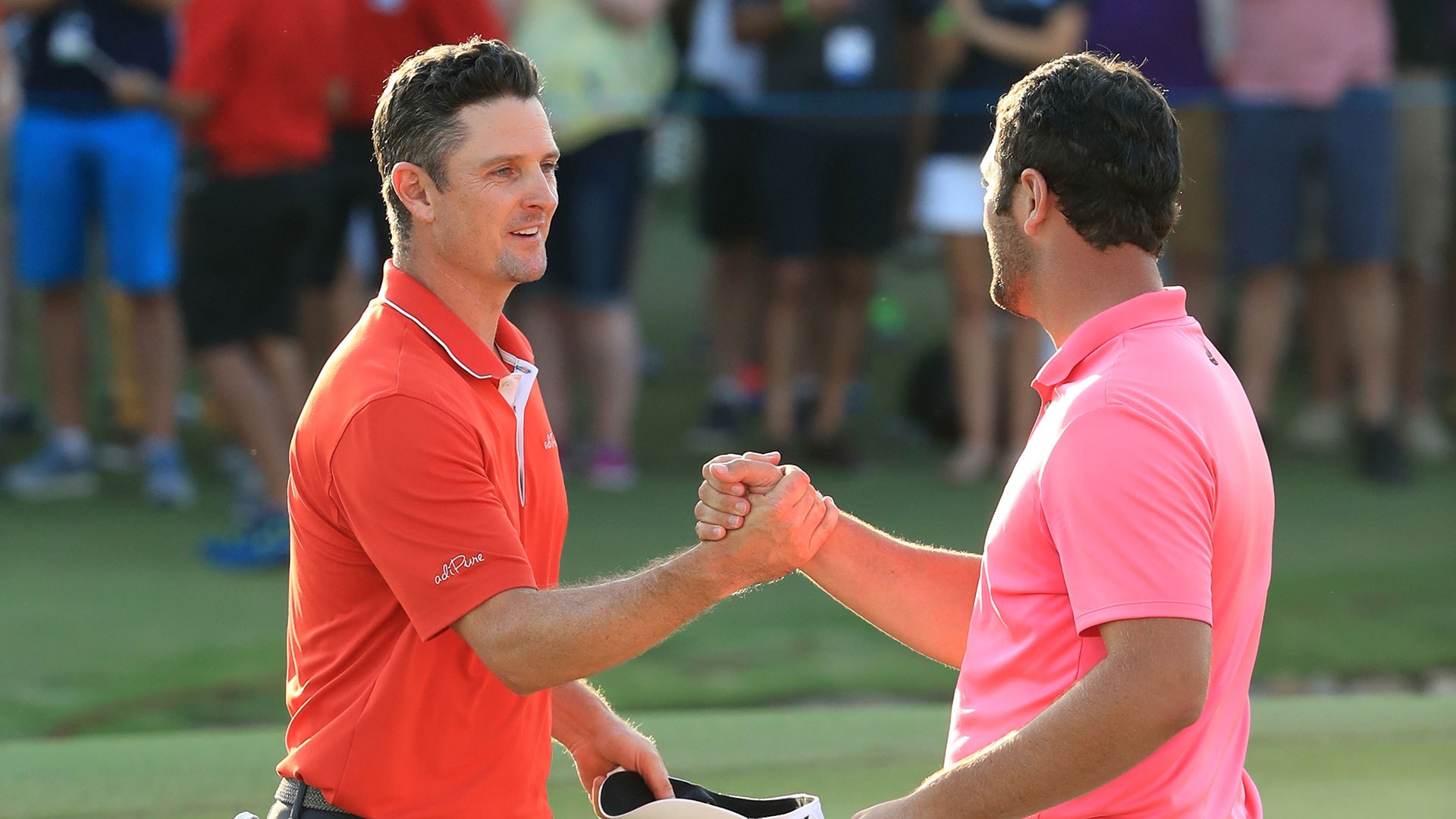 DUBAI, United Arab Emirates – Justin Rose will take a one-shot lead into the final day of the season-ending Tour Championship as he attempts to win a third straight title on the European Tour and a second career Race to Dubai crown.

The 37-year-old Rose made a gutsy par save on the final hole after a bogey-free round for a 7-under 65 Saturday and overall 15-under 201.

The Englishman leads South African Dylan Frittelli, who produced the day's best score of 63, and Spain's Jon Rahm, who played in the same group as Rose and matched his 65.

Rose is looking to be Europe's season-ending No. 1 for the second time. His leading rival for the Race to Dubai title, Tommy Fleetwood, is only two shots behind here after a second straight 65 on the Earth course of Jumeirah Golf Estates.

Fleetwood did his chances no harm by overcoming a stuttering start before making eight birdies in his final 11 holes to also post a 65. The 26-year-old Englishman was tied for fourth place at 13 under, alongside South African Dean Burmester (65) and Thailand's Kiradech Aphibarnrat (67), who closed with five birdies in a row.

Masters champion Sergio Garcia, the only other player with a chance to win the Race to Dubai title, is tied for 13th on 10 under after a 67.

Fleetwood had a lead of 256,737 points going into the final tournament and needs to equal or better Rose's finishing position to claim the title. If Rose doesn't finish in the top five and Garcia doesn't win, Fleetwood will have done enough.

Rose is hoping to win a third straight tournament after triumphs in China and Turkey.

Rose, who made some long putts for birdies apart from chipping in on the 13th hole, looked to be throwing away his advantage on the par-5 18th, when his second shot fell agonizingly short of the green and into the water hazard. But with his short game in superb condition, the reigning Olympic champion made a difficult up-and-down shot to stay ahead.

''That putt at the last is a big confidence-builder. That broke about 18 inches right-to-left downhill. That's the kind of putt I've been hoping to make. That was a really committed stroke. Hopefully I can build on that tomorrow,'' said Rose. ''I know what I need to do to stay at the top of the leaderboard. If I slip up tomorrow, he's (Fleetwood) right there. He's done everything he needs to do on his end, so it's a lot of fun.''

The last player to win three tournaments in a row on the European Tour was Rory McIlroy, when he won the Open Championship, the WGC-Bridgestone and the PGA Championship in 2014.

Fleetwood was 1 over after seven holes but turned it on with a hat trick of birdies from the eighth, and then four in a row from No. 13.

''I wanted to keep going. Let's bring the tee times forward for tomorrow,'' quipped Fleetwood after closing with a birdie on the 18th. ''Just one of them strange days where nothing was going at all. A couple sloppy pars on the par 5s, and a bad tee shot on fifth and I was 1-over through seven on a day where scoring has been really good ... Ninth and 10th, felt like we had something going ... it was a really good last 11 holes.''