Rose penalized for causing ball to move in Qatar 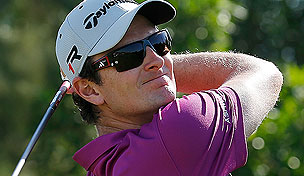 Justin Rose was assessed a one-shot penalty Wednesday after he was deemed to cause the ball to move during a 1-foot putt at the Qatar Masters.

The U.S. Golf Association and R&A announced last year that a new exception was added to Rule 18-2b, which exonerates a player from a penalty if his ball moves after it had been addressed because of an outside force, such as a gust of wind.

However, if the player is deemed to have moved the ball, he incurs a penalty stroke. As a result, the ball must be replaced and the player docked a one-stroke penalty.

After grounding his putter behind the ball on the short par putt on the 17th, Rose stepped away and believed he had caused the ball to oscillate fractionally. The Englishman instead carded a bogey and opened with a 4-under 68, putting him three shots off the early lead.

“I feel completely hard done by,” Rose said, via an unbylined Sky Sports report. “To cut to the chase, the greens aren’t perfect and have a lot of ridges and humps and hollows. It was just unfortunate timing as I put my putter behind the ball, which I know didn’t cause the ball to move, the ball was finding some indentation.

“I’m deemed to have caused it to move even though, in your heart of hearts, you know you haven’t. … Unfortunately I was on the wrong end of it, but I guess that’s the good thing about golf – you have to self-police out there. Nobody else in the group saw it, but I knew the ball had moved when I addressed it.”