Rose off to promising start in 2013 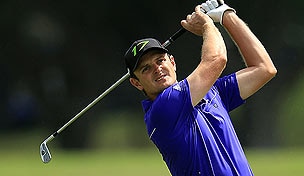 ABU DHABI, United Arab Emirates – On Wednesday Justin Rose told the media at the Abu Dhabi HSBC Golf Championship that after winning a World Golf Championship at Doral and playing a starring role in last year’s European Ryder Cup victory he was ready to take the next step in his career.

At the time the subtext to that conversation was winning the Englishman’s first major, but on Thursday at Abu Dhabi the practical form of that mindset was an opening 67 on a windblown layout to share the first-round lead with Jamie Donaldson in his first start of 2013.

That Rose began his season with a bogey on his opening hole only made his charge up the leaderboard that much more notable.

“I see it as the start of a very long week and a start of a very long year,” said Rose, who holed out a chip for birdie at the ninth hole and rolled in a birdie putt from 50 feet on the fifth. “You only really know if you are going down the right track once you’re under pressure and this gives me a great opportunity the rest of the week.”

It remains to be seen if 2013 will be a breakout year for Rose in the majors, but after his start on Thursday it’s beginning to look more likely.