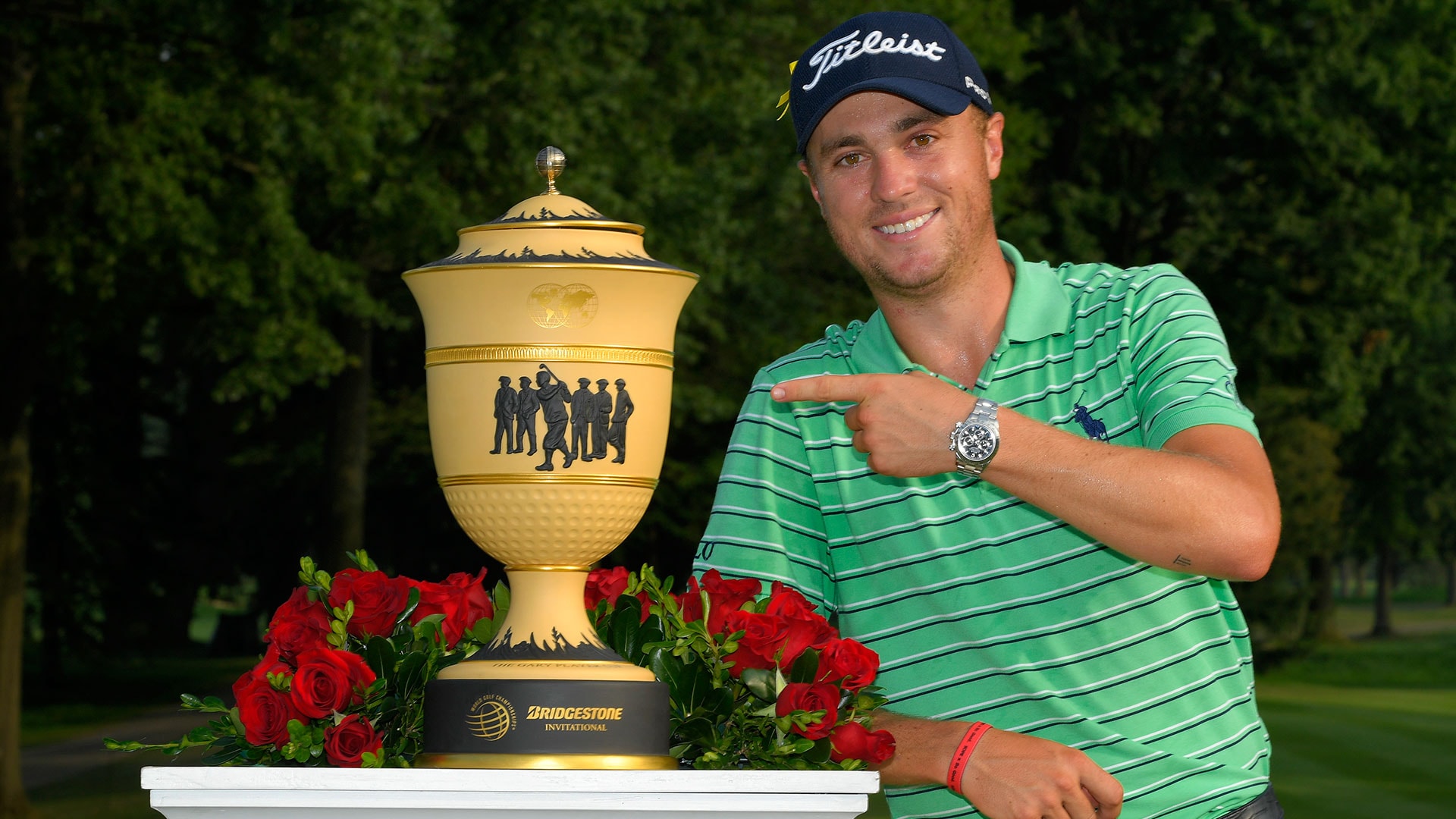 AKRON, Ohio – A light rain was falling when Justin Thomas headed out for a practice round on Tuesday at Firestone.

A two-time winner this season on the PGA Tour and a lock to don the red, white and blue later this year at the Ryder Cup, this was hardly a lost season. Yet, as Thomas made his way around the South Course he had something to say.

His game had been solid this summer, but the results had proven to be elusive, with just a single top-10 finish since March. This was more than just another practice round, this was an intervention.

“We sat down and just said, what are we doing wrong? What can we do better?” recalled Thomas’ father and swing coach, Mike. “He initiated it, he said this what he wanted to do. I told him, that’s really mature of you. When I was 25 years old I wouldn’t have done that.”

The impromptu meeting was much more than simply a pep talk, the reigning PGA Tour player of the year doesn’t need that. This was an unfiltered talk about what Team Thomas needed to do better.

Thomas is methodical about goals, thumbing his annual wish list into his phone with surprising detail. After winning last year’s Tour Championship he revealed a list that ranged from the predictable (win on Tour) to the amazingly detailed (finish the season ranked in the top 30 in scrambling).

But Tuesday’s meeting had just a single message – patience.

“That has been what we have stressed for two years. All you can control is what you can control. If putts aren’t going in you can’t let that impact the next putt,” Mike Thomas said. “His growth has been in patience.”

It was providence then that his patience would be challenged to the extreme just three days later.

“Friday morning he was putting [before his round] and I thought he was going to go ballistic. He was missing it in both directions and was like, ‘I feel like crap,’” Mike Thomas said. “I told him, ‘All you can control is how you feel. If you’re not stroking it well you can’t control that, but you can control your attitude.’”

Thomas went out and had his best putting round of the year, rolling in 122 feet of putts and gaining nearly five shots on the field in strokes gained: putting. It all added up to a 6-under 64 for a share of the lead at the WGC-Bridgestone Invitational.

Of everything Thomas has accomplished in his young career, from last year’s FedExCup victory to his triumph at the 2017 PGA Championship, he was missing only a World Golf Championship title from his resume.

On Sunday - at what was the last Bridgestone played a Firestone - he remedied that in style.

Despite a nervy start, Thomas began the day with a three-stroke lead and never really gave the world-class field much of a chance to close the gap. He made just a single bogey - at the sixth hole - and cruised to a closing 69 for a four-stroke victory.

Earlier this week, Rory McIlroy, who was paired with Thomas on Sunday, described his frequent practice partner as "nasty."

“He's got a nasty streak in him, which I think you need out here. He has that,” McIlroy said. “When he gets himself in the hunt, you can see like a little twinkle in his eye and he really enjoys it.”

The comment turned out to be prophetic, but then some would call Thomas’ final-round performance a prevent defense along the lines of what Tiger Woods once did so well in his prime, an ability to know when to make the pack come to you.

McIlroy figured to be Thomas’ most prominent roadblock on his way to his first World Golf Championship bottle cap, but the Northern Irishman tumbled out of contention when he played a six-hole stretch around the turn in 4 over par.

At least Jason Day’s bid lingered into the back nine, rattling off three consecutive birdies starting at the 10th hole to move to within two strokes of Thomas before a bogey at No. 13 set the stage for an uninspired finish. The Australian would play his last six holes in 5 over par.

Kyle Stanley, who also moved to within two strokes of the lead on the closing nine, followed a similar blueprint, dropping shots at Nos. 13 and 14 on his way to a closing 68 and a runner-up finish.

It was a coronation from there with Thomas making birdie at the 13th hole to extend his lead and closing his day with five stress-free pars for a 15-under total.

“I was very nervous going into today,” admitted Thomas, who now transitions to defending his title next week at Bellerive. “You kind of get that two-, three-, four-shot lead, it's different than one. With a three-shot lead, I obviously knew that I needed to play well, but you kind of have a little bit of wiggle room and you feel like you maybe play a little too conservative, but I was able to kind of dwell on past learning experiences and you always try to get it higher.”

Some might call that patience, which he may not have fully embraced had he not used that rainy practice round to sort things out with his father and caddie Jimmy Johnson.

From that heart-to-heart, Thomas threw everything he had at the game’s best and came away with the most dominant victory of his career.