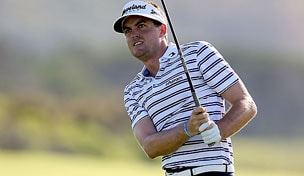 Getty Images
PLANO, TX - MAY 25: James Driscoll tees off the par three 2nd hole during the International Final Qualifying America for the 2009 British Open Championship at the Gleneagles Country Club on May 25, 2009 in Plano, Texas. Those who are successful will advance to the 138th Open Championship at Turnberry Golf Club in Scotland on July 16-19. (Photo by Marc Feldman/ Getty Images)  -

KIAWAH ISLAND, S.C. – It seems as if Keegan Bradley is asked the same questions almost everywhere he goes.

“You got a text from Tom Brady?”

“You threw out a first pitch at Fenway?”

“You played golf with Michael Jordan?”

“You played your college golf at ST. JOHN’S?”

“What in the world is someone as young as you doing with a long putter?”

The questions are understandable in light of what has happened to Bradley in the 12 months since he caught Jason Dufner from behind on Sunday at the Atlanta Athletic Club, then beat him in a playoff to win the PGA Championship.

Bradley was 25, a PGA Tour rookie who might have believed at the time that his full name was “Keegan Bradley, nephew of Hall of Famer Pat Bradley.”

It may not be very long before the Hall of Famer finds herself being introduced as “Keegan Bradley’s aunt.”

Clearly, the nephew isn’t a one-time wonder. Perhaps the question he should have been asked after he shot a 4-under-par 68 in the opening round of his title defense at Kiawah Island’s Ocean Course on Thursday is this: Just how good do you think you can be?

The answer would be VERY good.

It isn’t just that Bradley almost won at Riviera earlier this year, beaten by Bill Haas in a three-man playoff (Phil Mickelson was along for the ride) when Haas made a putt across the 10th green that started in Orange County and dropped into the hole after a change of area codes. It isn’t that being slighted by Fred Couples when Couples opted for Tiger Woods and Haas as his captain’s picks for the Presidents Cup team a year ago clearly motivated him to nail down a Ryder Cup spot this year. It isn’t even that he came from behind (again) last Sunday to catch Jim Furyk and win at Firestone.

It’s the look. Bradley has it. Even though he comes across in person as a 26-year-old who is still wide-eyed by all that’s gone on: “I mean, I got a note from Bill Belichick – wow, he’s always been a hero of mine,” – he certainly isn’t wide-eyed or overwhelmed when he steps inside the ropes.

Thursday he found himself on the 10th tee at 8:30 a.m. looking Tiger Woods right in the eye. Martin Kaymer, the 2010 PGA champion was also there but he might as well have pulled up a chair and watched. It would have been a lot easier than taking a long walk on a hot day en route to 79.

At least Kaymer had a front-row seat for the Bradley-Woods matchup. Make no mistake, as much as Woods loves going head to head with anyone who cares to challenge him, Bradley isn’t the least bit intimidated by him or by anyone in the game. In fact, he clearly reveled in the moment. He started out birdie-eagle and, even though he stumbled twice with three putts (one from off the green) he was clearly in his element all day.

He was practically gushing after he signed his scorecard. Speaking to the media outside the scoring area he used the word “great,” six times in five minutes and threw in an “amazing,” just for good measure. But it was one five-word sentence that was most telling: “I love playing with Tiger.”

There was a time in golf when playing with Woods was a golf death sentence. For most of 12 years, starting with the fateful Friday evening in 1997 when Colin Montgomerie declared his experience would be an advantage for playing with the 21-year-old Woods during the third round of the Masters, almost every player in golf would have taken 18 trips to the dentist over 18 holes with Woods – especially in a major championship. The day after Montgomerie’s comment he shot 74 – only nine shots more than Woods.

That sort of margin was the norm for a long time. That was then this is now.

Bradley doesn’t fear Woods, or anyone else in the game. He believes his best is as good as anyone else’s best and he knows that he can play in the heat, whether it is 90 degrees, humid and windless as it was Thursday morning or if it's Sunday afternoon at a major championship.

Or in the Ryder Cup. Bradley is much too polite to tell people what he really thinks about Couples’ decision to choose Haas over him last fall. Couples was going to take Woods because, regardless of how poor his year had been, he is still Tiger Woods and has the TV ratings to prove it. But the choice of Haas over Bradley came down to simple golf politics: The Presidents Cup is run by the PGA Tour. Haas won the biggest event the Tour has to offer: The Tour Championship and, thus, the FedEx Cup. If you offered any player on Tour five FedEx Cups or one major, they would take the major. Bradley won a major – but it was a major put on by the PGA of America.

Bradley might have fared better if Davis Love III needed to consider him for a captain’s pick on this year's Ryder Cup team since both the Ryder Cup and the PGA are run by the PGA of America. But he didn’t want to leave it up to anyone. That’s why the victory at Firestone, which locked up his spot on the team, was so important.

He came to Kiawah brimming with confidence and good cheer, although to be fair, he shows up almost everywhere brimming with good cheer. The chances that he defends his title are slim. Since Curtis Strange won a second straight U.S. Open in 1989, Woods had won majors in back-to-back years four times (Masters 2001-02; British Open 2005-06 and the PGA in 1999-2000, 2006-2007).

Among mortals here is the list of players who have accomplished that feat in the last 23 years: Padraig Harrington – British Open 2007-08.

That’s it. That’s why betting on Bradley to hold the Wanamaker Trophy on Sunday evening probably isn’t a smart play. Then again, it isn’t that long ago that he was playing on the Hooters Tour and trying to earn a spot on the PGA Tour.

Now, he’s a major champion, a Ryder Cupper and clearly someone who is going to be a factor in the game for years.

He may get back to the mound at Fenway again in the near future.

Come to think of it, the Red Sox might be able to use him.