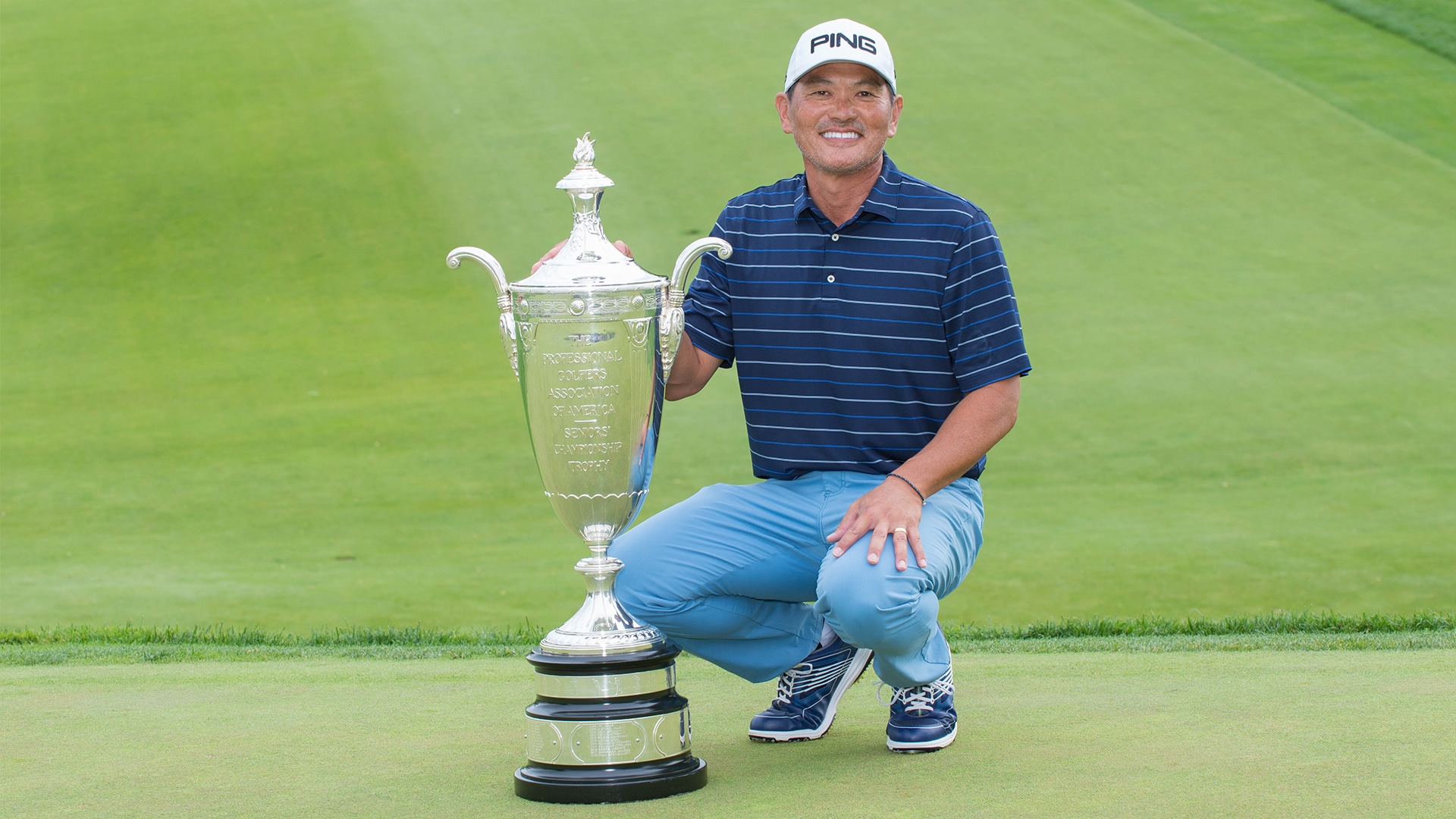 PITTSFORD, N.Y. — Ken Tanigawa overcame a three-shot deficit on the back nine to pass defending champion Paul Broadhurst and win the Senior PGA Championship on Sunday.

In only his second year on the senior tour and some 15 years after giving up playing professionally, Tanigawa shot an even-par 70 to finish at 3-under 277 at Oak Hill Country Club's East Course. The 51-year-old held off PGA Tour Champions money leader Scott McCarron by a stroke.

Tanigawa scrambled to par the par-4 closing hole after his tee shot landed in a fairway bunker. He chipped out into the fairway, hit his third shot to 12 feet and made the putt.

Playing alongside good friend and former UCLA teammate Tanigawa, McCarron also shot 70. McCarron's bid to force a tie ended when he missed a 25-foot birdie putt about a foot to the left.

Broadhurst, who won the major at Harbor Shores in southwest Michigan last year, began the day with a two-shot lead, but shot 75 to finish third at 1 under. His chance to force a tie ended when he missed a lengthy birdie putt and then settled for a bogey.

Tanigawa also won the tour's PURE insurance Championship last year at Pebble Beach. His previous best finish this year was a tie for seventh at the Insperity Championship three weeks ago.

The final round turned on the back nine, which Tanigawa began at 1 under for the tournament and trailed Broadhurst by three shots.

His comeback run began with a birdie on the par-3 11th. He then got to 3 under for the tournament - and one shot back of Broadhurst - by sinking a 6-foot birdie putt on the par-3 15th.

Tanigawa tied Broadhurst at 4 under with a 20-foot birdie putt on the par-4 16th. He then took the lead for good a few minutes later when Broadhurst had difficulty getting out the rough on 16, missed an 8-foot bogey putt and settled for double bogey to fall to 2 under.

Tanigawa also caught a break on the 323-yard 14th. He hit his tee shot right and into the trees, but the ball caromed off a branch and into the rough below the hole. He eventually made a 5-footer for par.

Born in Kobe, Japan, Tanigawa grew up in southern California and was teammates with McCarron and Brandt Jobe at UCLA. He spent 11 years playing professionally in Australia, Asia and Japan before eventually giving up playing professionally after 2003. He joined the PGA Tour Champions last year after tying for fourth in the qualifying tournament.

It was an unlikely final round for Broadhurst, who was coming off two bogey-free rounds and was the tournament's co-leader though two rounds. The 53-year-old from England had his bogey-free streak end at 40 holes on No 3. He finished with just one birdie, on the par-3 11th, and had four bogeys and the double bogey.

Two-time U.S. Open champion Retief Goosen finished fourth at even par after a 74. He began the day in second, two shots behind Broadhurst and was attempting to win his first tournament since the PGA Tour's Transitions Championship in 2009.

In a week that was marred by three weather delays, including two on Saturday, the final round was played under partly cloudy conditions with temperatures in the 70s and a slight breeze.

The East Course proved how stingy it can be on Sunday during a senior major.

Mark Brown, from Oyster Bay, New York, and Bob Sowards, from Dublin, Ohio, were the tournament's top club pros by finishing in a tie for 21st at 9 over. 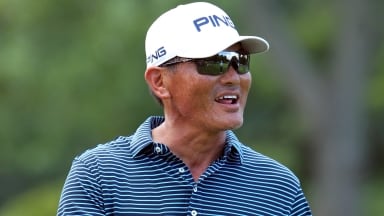 Ken Tanigawa made a 30-foot eagle putt on the par-5 18th at Pebble Beach to win the Pure Insurance Championship on Sunday for his first PGA Tour Champions title.