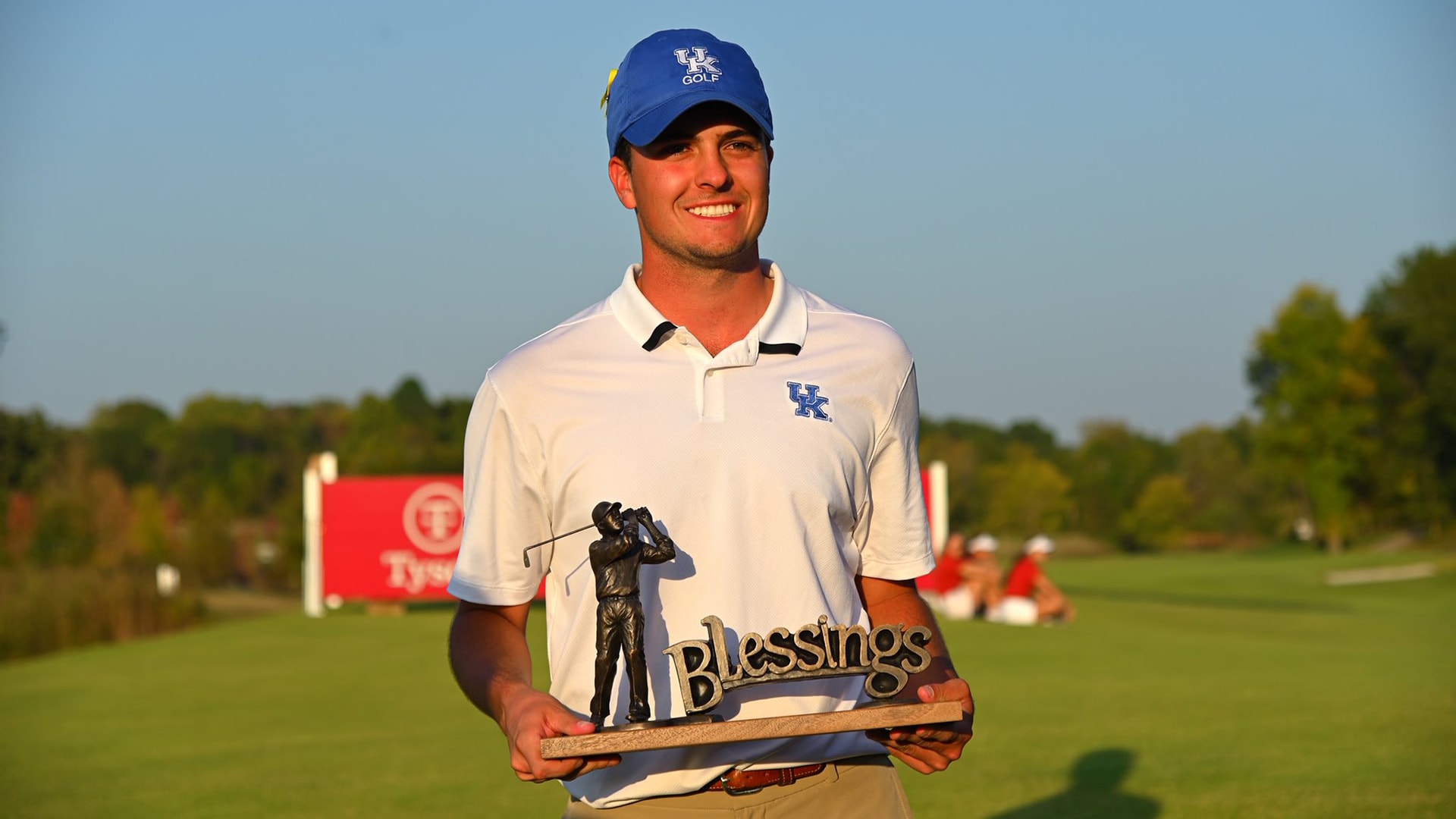 As he sat at the scorer’s table Wednesday evening at Blessings Golf Club, he folded his arms and buried his head. He just had signed for a 4-over 76 that included a double bogey at the penultimate hole and a triple bogey at the last after playing the wrong ball in a fairway bunker.

Entering the day with a seven-shot lead and leading by six with three to play, Goff figured he had cost himself the tournament. Tennessee’s Hunter Wolcott had just birdied the par-3 17th to tie the lead – or at least everyone thought – and also held the tiebreaker.

But in another crazy turn of events, Wolcott lipped out a 3-footer for par on No. 18 and Goff, watching from the second floor of the clubhouse, held on at 6 under, which was actually good for a two-shot victory after live scoring corrected itself once Wolcott signed his card.

“I have never seen anything like that in my life,” Kentucky head coach Brian Craig said.

With competitors from all 24 teams at the Blessings Collegiate Invitational, the fall kickoff event for the SEC men's and women's teams, playing in fivesomes with their teammates, it made for some confusion. On Monday, Georgia teammates Davis Thompson and Will Chandler played each other’s ball in the 16th fairway. Two days later, all five Kentucky players found the left fairway bunker off the tee at No. 18.

Goff, who was coming off a poor tee shot that found the hazard on the previous hole, thought he was the only one of his teammates playing a Titleist 1 with a Kentucky logo. He was mistaken.

Facing a two-shot penalty, Goff missed the green with his next shot, his fifth, before getting up and down for triple.

“I have never felt so many emotions in such a short period of time,” said Goff, as he fought back tears.

He wasn’t crying because of his mistake. Two months ago, Goff lost one of his teammates. Would-be junior Cullan Brown, whom Craig called “the finest young man he’s ever met,” died Aug. 4 of bone cancer.

While the Wildcats wore yellow ribbons on their hats and stitched Brown’s initials, "JCB," on several team items, Goff, Brown's former roommate, had the honor of carrying Brown’s golf bag.

“How fitting is that?” said Goff, who finished the week with 18 birdies for "Brownie," tops in the field. “It’s surreal. I don’t have words for it.”

Really, though, he did.

“I knew that Cullan was watching down on me and he was with me every moment, and I truly believe that he was the reason I won,” Goff said. “I can also say that if he was still here, I probably would’ve finished second.”

Goff texted with Brown’s sister, Cathryn, on Tuesday night, and after his emotional triumph, the first of his college career, he planned to call Brown’s family to share the special moment with them.

“This is going to put a smile on their face,” Craig said.

Brown’s mother, Emily, was actually watching Goff’s winning interview on TV, and she tweeted afterward: “We were crying with you, Alex. Sure do miss my boy.”

Goff wasn't the only champion Wednesday in Fayetteville, Arkansas. Alabama opened its season with a five-shot win over Tennessee despite playing the final hole in a collective 6 over. And the host Razorbacks got the job done on the women's side, as individual winner Brooke Matthews won by five shots at 10 under while leading her team to an 18-shot victory over LSU.