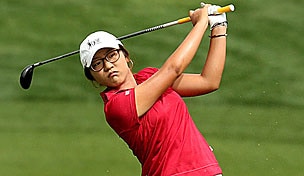 Ko was tied for 23rd at 3 under overall when she signed her scorecard. The 15-year-old from New Zealand was among five amateurs who made the cut. Northern Ireland’s Stephanie Meadow (72) was next best amateur in a tie for 47th.

Ko, the youngest winner in the history of the LPGA and Ladies European Tour events, came to Mission Hills wanting more than low amateur honors. She has won three professional titles.

“This is my first time at Kraft Nabisco, so I was very excited,” Ko said. “It was a little disappointing overall, but I finished well today. Hopefully, this is just one of many Kraft Nabiscos for me.”

Ko is scheduled to play in at least four more LPGA events this year. She said she has sponsor exemptions for the Lotte Championship in Hawaii in two weeks and for the Marathon Classic in Toledo, Ohio, in July. She also will play the U.S. Women’s Open at Sebonack in June based on the U.S. Women’s Amateur title she won last year. She is in the Ricoh Women’s British Open at St. Andrews in August by virtue of winning the Ladies European Tour’s New Zealand Women’s Open earlier this year.

Ko has now been the low amateur in all three major championships in which she has competed. She was low amateur last year in both the U.S. Women’s Open (T-39) and Ricoh Women’s British Open (T-17).